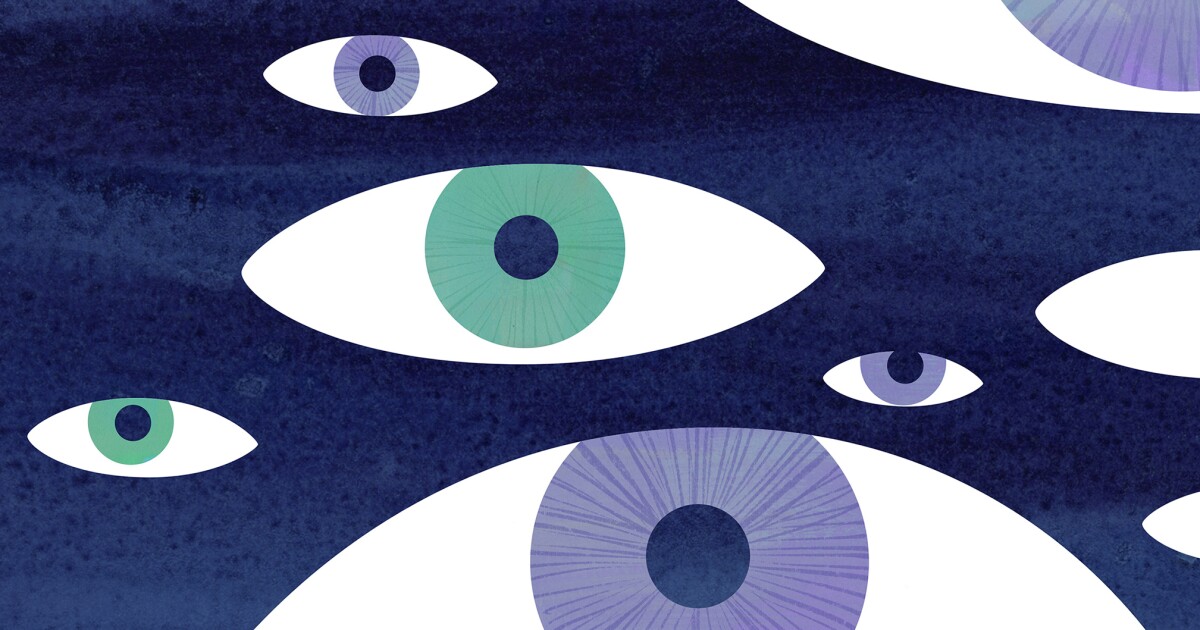 he charges this week against Harvard University — essentially, that it failed to protect students from a predatory professor — sound suspiciously like a bad replay. Here’s how the story unfolds:

A valuable higher education product (eg, John Comaroff) is recruited from one institution to another (eg, Harvard). The new institution ignores warnings that the recruit was previously accused of predatory behavior. Not surprisingly, the rookie is later accused of continuing to harass and threaten students. Eventually, after clearing institutional hurdles, the students force the university to open an investigation into the sexual misconduct.

Then comes a very specific detail: the university is unethically and possibly illegally accessing a complainant’s mental health records and using them to discredit her. The end.

What kind of trash B movie is this? And why do we have to keep watching it?

Seven years ago, when whispers about Comaroff were already circulating at Harvard, the University of Oregon was in the news for reasons it deeply regretted. A student who said she suffered a brutal gang rape has filed a lawsuit against the university, alleging that Oregon recruited one of the defendants, a basketball player, when it knew the player had been expelled from his previous team at another college while he was under investigation. for the gang rape of a student there. The complainant also alleged that the university mishandled her on-campus complaint and, without her consent, took her therapy records and turned them over to the General Counsel’s office in anticipation of litigation. It was true – the seizure of the records was revealed by a whistleblower at the advice office.

Surprisingly, this move was legal. Here’s why: When students seek medical care, including mental health care, on campus, their records aren’t as well protected as one might think. Rather than being covered by Hipaa (the Health Insurance Portability and Accountability Act), the law that protects medical confidentiality, the records of students who seek treatment at on-campus student health centers do not are covered only by Ferpa (the Family Educational Rights and Privacy Act), the law that protects the privacy of students. As I wrote at the time, “compared to Hipaa, Ferpa is about as protective as cheesecloth.”

Ferpa allows on-campus health centers to release a student’s medical records, including mental health records, to college officials under certain circumstances. One such circumstance is when the student and the institution are involved in a dispute. If student processing records were protected by Hipaa, the bar for access would be much higher: the university could only obtain these records through the legal process of discovery, overseen by a judge.

The University of Oregon ultimately settled the victim for $800,000, and the lawsuit helped close the Ferpa loophole for student medical records. I worked with Congresswoman Suzanne Bonamici from Oregon to try to fix the problem. Bonamici paved the way for stronger laws protecting student records in Oregon. At the federal level, she pushed the Department of Education to issue a “Dear Colleague” letter providing new, stricter guidelines on Ferpa, treatment records and litigation. (The letter is not a law, but rather policy guidance on how existing law should be interpreted.)

The letter urges higher education institutions to give students’ medical records greater protection, similar to that of Hipaa, especially “in cases where a dispute arises between the institution and the student.” As a political argument, the letter also points out that failure to protect student privacy “could deter students from taking advantage of essential campus resources.”

However, none of these councils changed the fundamental provisions of Ferpa. If a student sue their university, the university can still access that student’s campus mental health records outside of normal litigation channels. So the advice I gave in 2015 remains the same: if you are raped on campus, don’t seek therapy through your university health center.

Now, a new lawsuit against Harvard University has seemingly rendered my (at the time radical) advice moot.

The case, brought by three graduate anthropology students, accuses Harvard of a “decade-long failure to protect students from sexual abuse and career-ending retaliation” by anthropology professor John Comaroff. Reports in these pages and elsewhere have detailed the background to the accusations.

One of the most shocking allegations relates to the issue of medical confidentiality. According to the complaint, Harvard successfully obtained the mental health records of one of the complainants, Lilia Kilburn, from an off-campus psychotherapist during an investigation into Comaroff’s misconduct. Kilburn says she disagreed with this post: “In 2020, ODR [the Office for Dispute Resolution] contacted Ms. Kilburn’s psychotherapist, a private therapist not affiliated with Harvard, and obtained psychotherapy notes from her sessions with Ms. Kilburn. The ODR did not obtain Ms. Kilburn’s consent for the disclosure of these records. »

The complaint also alleges that after obtaining Kilburn’s mental health records, Harvard made those records available to Comaroff and “anyone with access to the final report”, despite the complainant’s attempts to have the university lock down access. Comaroff then allegedly used Kilburn’s medical records to claim that she “imagined he was sexually harassing her”, citing her diagnosis of post-traumatic stress disorder. (The complaint alleges that Kilburn developed PTSD as a result of Comaroff’s sexual harassment.)

These claims are shocking. The Ferpa Medical Records Exception allows the seizure of records during dispute and only from institutionally affiliated professionals. Both of these conditions were met in the Oregon case. Neither is encountered here.

If the allegations in the complaint are true, then the therapist violated Hipaa, and the university was complicit in that violation. Harvard doesn’t do anything halfway, it seems.

Harvard denies taking the medical records without consent. In a statement, Nicole Merhill, director of the Office for Gender Equity and the university’s Title IX coordinator, writes that the office responsible for investigating sexual misconduct “does not contact the medical provider of a party, except where a party has indicated that the supplier has information that the party wishes the ODR to consider. The office would obtain such information “only with the consent of the party”. In short, Merhill does not deny that Harvard got hold of Kilburn’s mental health records – but she claims any seizure of records was done legally.Her words imply that Kilburn consented to the release of the records.

Merhill also worries about the “potential chilling effect” of the complaint on students’ willingness to seek advice. The crippling effect Merhill fears is real, but it’s nothing new. Seven years ago, I wrote that unless the law changes, students should seek mental health treatment off campus to protect their privacy. Now that an off-campus therapist is involved, the situation is much worse.

You might hear some people say that the processing records that are relevant to a lawsuit like this will “just come out on discovery” — the information-gathering process that precedes the trial — so it doesn’t matter if Oregon or Harvard or Petunia Community College takes them without permission. These people would be wrong. Luke Honeycutt Everett, clinical professor of law at the University of North Carolina at Chapel Hill, told me, “While a lot of information changes hands upon discovery, it’s not a free game; it comes with guarantees. A judge oversees what is disclosed, to whom it is disclosed, and what is made public and what is not. Lawyers can raise objections to what is relevant, and judges make decisions on those objections. To obtain information from a third party, a subpoena must be issued. When done correctly, the process provides a measure of privacy protection.

And to obtain medical records through the discovery process, a case must first be discovered. Cases that resolve early may not be discovered at all. As any lawyer knows, most cases get settled.

If the therapist in the Harvard case was indeed not affiliated with a university and Kilburn indeed did not sign a release authorizing the therapist to share records with Harvard, then the only way Harvard should have been able to put the hand on the files is via summons to appear beforehand, that is to say during a dispute. A decision on campus is not a dispute. Too many questions remain unanswered here.

Harvard does not deny having Kilburn’s records, but it denies obtaining them illegally. So how did the university get them?

In cases where complainants allege emotional distress, such as this, mental health records can help prove or disprove such an allegation. That could be part of what’s going on here.

But something more insidious underlies seizures of records in sexual harassment cases like this. In our justice system, any mental health issue affects the credibility of witnesses. This is especially true in cases of sexual assault. For example, police find victims of sexual violence with mental health issues seven times less credible. Defendants of sexual violence and their proxies know that mental illness makes a victim less credible and use this to their advantage.

It’s no surprise, then, that any institution would seek the mental health records of a woman filing a sexual misconduct complaint against one of its most decorated teachers (or prized athletes). After all, the best way to devalue a victim of sexual violence is to point out that she is hysterical. Ask Freud.

Attacks on the credibility of victims based on their mental health are persistent and widespread. They represent a rot at the heart of our justice system. Harvard’s Title IX coordinator got one thing right: We need our students to trust counselors on and off campus — especially now, as the pandemic has pushed student mental health to the brink. Let’s not break students’ trust in the people who could help them the most.

Why has easyJet decided to discontinue unassigned seats?