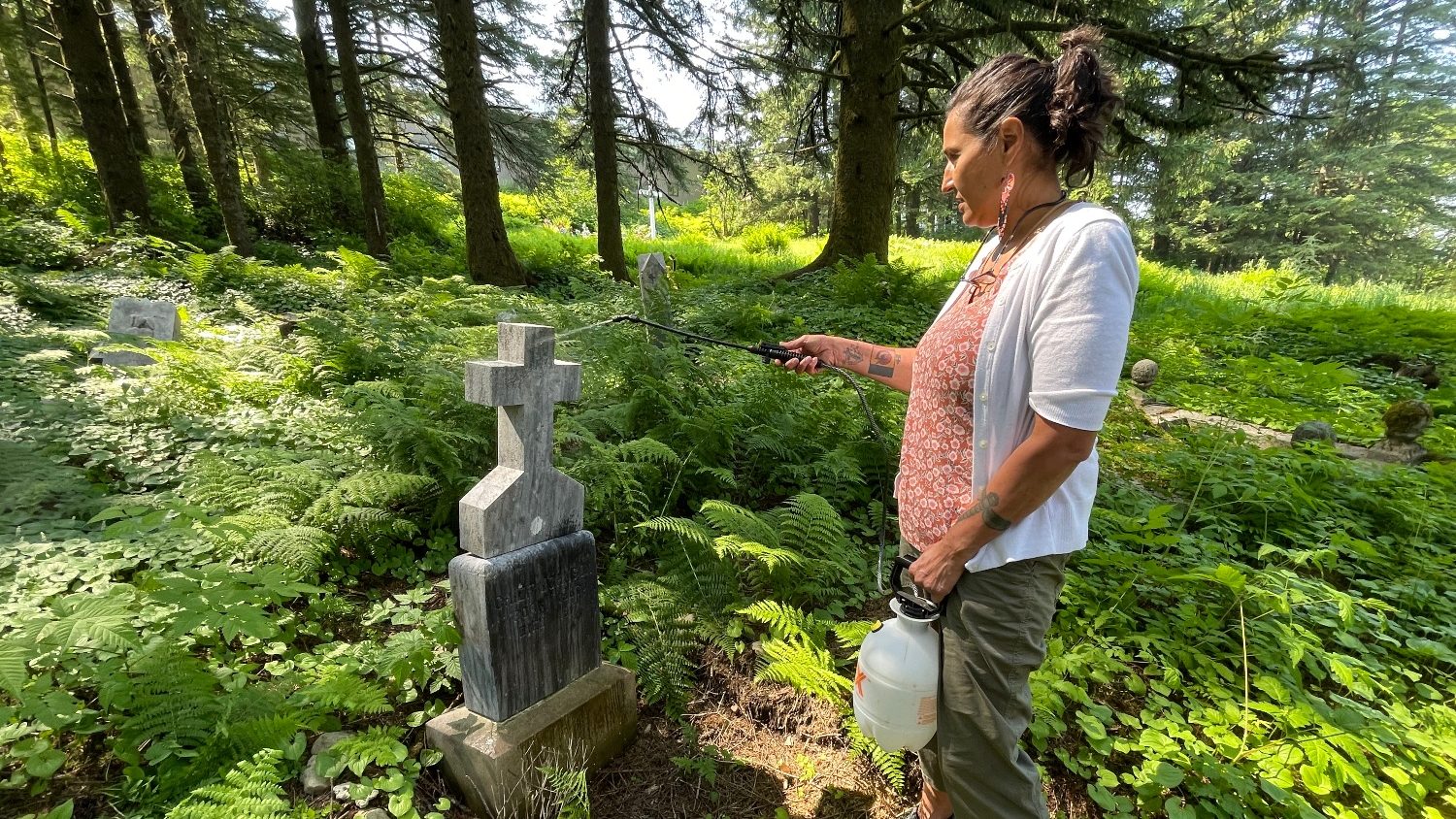 Jamiann S’eiltin Hasselquist plays a song from his phone at a grave near Lawson Creek on Douglas Island in Juneau. She puts the phone on the ground.

“It was a T’aaḵu Kwáan song, the song of the wolf. I suspect he’s part of the T’aaḵu Kwáan, and so I played the song to honor him and his people and have him heard through the floor,” Hasselquist said.

The tombstone has a Bible at the very top with the gates of heaven below and a wolf below. It has two names: Kitchoshan and Kakantan. The person was born on July 5, 1850 and died on June 3, 1901.

This is just one of hundreds of mostly neglected resting places found off the Douglas Highway around the Lawson Creek area, many of which are owned by Aboriginal people. Hasselquist is one of a group of volunteers who spend time restoring and discovering Aboriginal graves, “not letting them be forgotten and preventing them from being rebuilt,” she said. “We know that kind of thing happened here.”

A little further south, along the Douglas Highway, is Sayéik Gastineau Elementary School, which was built on an Aboriginal cemetery in the late 1950s.

Since last April, Hasselquist said volunteers have spent hundreds of hours on weekends and evenings ‘finding their way through’ all the growth and foliage – cutting down bramble bushes, weeding and cutting branches. trees and old dead trees.

“You would remove enough bushes to clear the grave you were looking at. And then you would look through the stems and you could see other graves keep coming and going,” she said.

A 1995 City and Borough of Juneau Report on Historic Douglas Cemeteries states that approximately 514 graves are in cemeteries recognized as “Catholic, Eagle, Douglas Indian, Mason, Odd Comrade, Municipal, Serbian , Asian, Native and Russian Orthodox. “Today, some of these sections, such as the Eagles and the Catholics, are well maintained, but some others are not.

The group of volunteers restored or uncovered dozens of Aboriginal graves, Hasselquist said, including Chief Johnson, chief of the T’aaḵu Kwáan.

“His stone was completely finished. We didn’t even know who it was. He just flipped over,” she said.

The volunteers found numerous footprints in the ground, but not the markers for each. Some were buried a few centimeters underground and discovered during the cleanup. “So we suspect there are other markers there; we just have to go find them,” Hasselquist said.

“Everyone deserves a place to rest with honor, dignity and respect,” Hasselquist said. “We all have the inherent right and responsibility to care for these areas, whether we are connected to them or not. It’s part of our community.

Hasselquist was inspired to do this work by Sitka resident and cemetery restoration expert Bob Sam. She first saw her work with Sitka Cemeteries on Facebook and later saw it in person. Last April, the two connected when Sam was in Juneau working at Lawson Creek Cemetery.

For Sam, restoring and maintaining cemeteries – whether in Sitka, Juneau or Japan – is his life’s work. “It’s something I’ve been doing since I was little,” he said. Work is “not a one-time thing. It is a perpetual care.

Sam, 68, has family buried in Juneau. He began cemetery restoration in Juneau in the early 1990s at Evergreen Cemetery, particularly the Orthodox Church section. Then he started working at Lawson Creek after learning more about it from Lingít’s elder, Marie Olson.

“The Indigenous section of Lawson Creek has been neglected, forgotten and destroyed. Every tombstone has been knocked down. There was little evidence of their existence,” Sam said. “It took years of cutting brush, clearing trash, standing headstones just to find the aboriginal section of Lawson Creek. I could not have done this work without the support of the Elders who also donated tools and other things.

Sam said it is a responsibility to care for and maintain ancestor burial sites.

“We are all human beings and how we treat the dead defines our humanity,” he said. “If a cemetery looks neglected and forgotten, it is abused. But if you clean it up, make it really beautiful, it gets to a point where it takes care of itself, where people pick themselves up and show respect.

Although the intention was to dig up and restore native graves, Hasselquist and other volunteers also spent a lot of time at other neglected and forgotten resting places.

“We extended after reclaiming salmonberry bushes from our ancestral region,” Hasselquist said.

But first, the band had to go through a healing process.

“A lot of things were said out loud, verbalized, just bringing out the frustrations that we weren’t being cared for and we won’t be invisible anymore, we’ll be seen, they’ll be seen and remembered,” Hasselquist said. .

“And so when we went through all of that, a weight was lifted, and we were looking at the other areas, and we were like, ‘Let’s go. Let’s start working on it. “

Hasselquist would like to focus and work specifically on the Aboriginal section.

“But we focused so much on other areas that it took our time. So if we could get others to take responsibility for the other areas at least take care of them by mowing and weeding and keeping control of the bramble bushes and things like that because that’s just a jungle on this side.

Schampf, one of the volunteers, is slowly working on a cemetery database that will eventually be public.

“All the information I have collected is publicly available; much of it is freely accessible online. However, it is very dispersed. I hope to bring this all together in a way that makes it easier for families to find their loved ones and find information about them more easily.

“Many of those buried at Douglas fought to be recognized and respected in life, and fought to be remembered in death. It takes continued effort to sustain this, and much of the history of these cemeteries is already irretrievably lost – the loss of physical records, the loss of living memories, and the neglect of the cemeteries themselves have all played a role. It’s important to work on it now before others are lost,” Schempf said.

The issue of maintaining Douglas’ historic cemeteries was recently brought to the attention of the City and Borough of Juneau in 2018 when former Mayor Merrill Sanford offered to transfer the well-maintained Eagles Cemetery to the city, with the understanding that the city would continue the maintenance. The city explored what this process would entail, but ultimately no action was taken. Sanford also asked the city to consider acquiring the other Douglas cemeteries.

Cemeteries and burial sites near Lawson Creek in Douglas are owned by various parties and precise land ownership is not something the City and Borough of Juneau have ever been able to determine.

A 2019 memo to the Lands Committee said: “There has been controversy regarding the ownership of the Douglas cemeteries since the late 1800s. Discussions about the maintenance of the cemeteries and whether or not they were owned the city began as early as the 1940s, and the subject has been brought to the attention of the municipal governing body (Douglas City and the City and Borough of Juneau respectively) every decade since.

According to the city, “there hasn’t been much movement” on the issue of maintenance of Douglas cemeteries since the 2019 memo.

“I think it could be taken up if the Assembly made it a priority, which could be the result of citizens raising it,” said lands and resources manager Dan Bleidorn.

The city’s Parks and Recreation Department currently maintains the Douglas Indian Cemetery, which is across from Sayéik Gastineau Elementary School and separate from the other cemeteries surrounding Lawson Creek. Although the city does not own it, the city has provided weekly maintenance since 2012, when a renovation at the school disrupted the human remains.

Hasselquist said that, for her, the choice to restore Indigenous graves “has to do with the trauma of my personal life.” The trauma stems from his ancestry and family attending residential schools and “the things that were brought home to us and taken away from us.” She is the first generation of her family that did not attend boarding school.

When the remains of hundreds of Indigenous children were found on the grounds of a former boarding school in British Columbia last summer, Hasselquist said working to restore the graves “contributed to the anxiety and triggering that was happening”.

“It helps me find more peace,” she said. “And then it feels good to take care of our ancestors and take care of these places. They deserve to rest in a beautiful place, with honor, dignity and respect.

The work of volunteers has inspired others to join them through cemetery restoration and cleanup events posted on the group’s Facebook page. Hasselquist hopes to “ignite a spark” in the youngsters to take care of the zones.