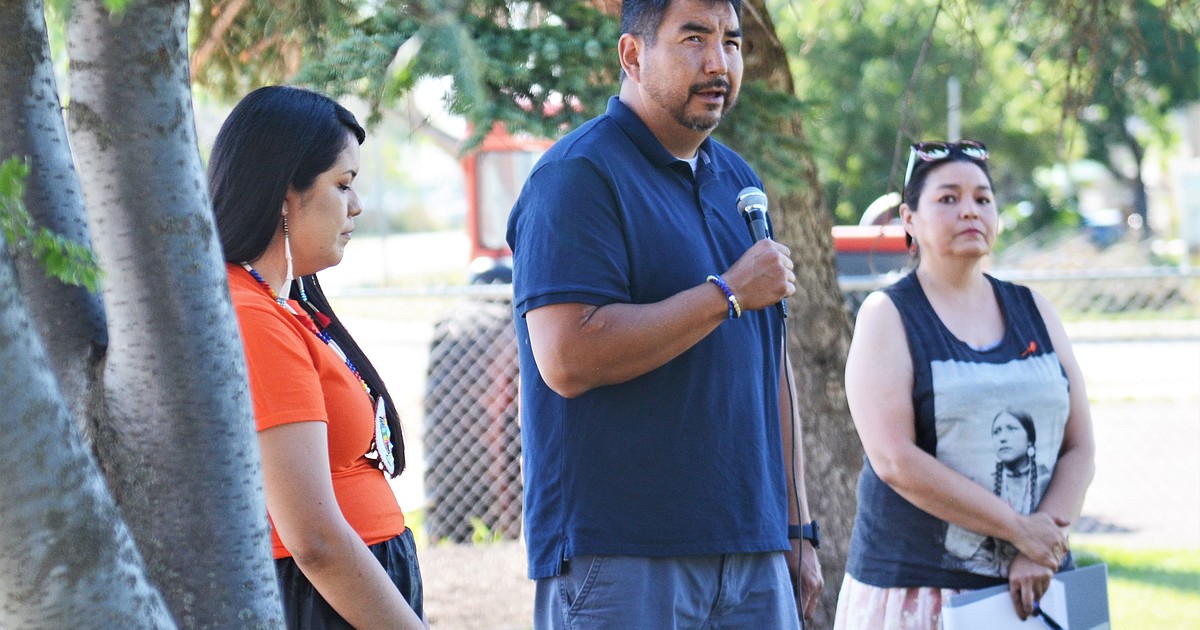 ST. IGNATIUS – The recent discovery of hundreds of children’s bodies at the sites of several Indian residential schools in Canada has raised awareness of the widespread abuse suffered by Indigenous children in many of these schools in Canada and the United States

During a vigil Saturday at St. Ignatius Mission Church, the site of a former Indian Residential School, it was clear that the memories and destructive effects of those times are still fresh, raw, and personal to those who live there. ‘lived, as well as for their descendants and community.

The vigil was hosted by Karissa Trahan-Sorrell and Claire Charlo to honor the thousands of Indian children who were taken from their families and forced to stay in one of the residential schools. Several members of the Confederate Salish and Kootenai tribes shared personal family stories and historical accounts that touched on the terror, torture, loneliness and even death these children faced, and the trauma that continues to affect their families. and their community, even after decades. Flowers, teddy bears and LED candles were placed in a field memorial in their memory.

The Saint-Ignace Mission School was one of 17 Indian residential schools in Montana listed by the National Native American Boarding School Healing Coalition, out of 367 in the United States. The schools were federally funded, but mostly run by churches, part of an overt effort by the US government to strip indigenous peoples of their culture and language and assimilate them into white culture. Many students have been subjected to severe punishment, starvation, neglect and sexual abuse because they have been denied the use of their own language, culture and family. Often, children were sent to distant schools or adopted and brought up far from their families and cultures. Some are still trying to find their way back.

What happened in the residential schools, said Claire Charlo, â€œwas an act of genocide. And it went on and on for decades. The children, grandchildren and great-grandchildren of the survivors â€œstill suffer from the trauma of the Ursuline boarding schoolsâ€. The Ursulines were the order of nuns who established and ran many schools, including that of St. Ignatius.

Tribal councilor Martin Charlo, Claire’s brother, said at the vigil that he had been an altar boy at the church and had many fond memories. But her father attended school during a time from the 1940s to the early 1970s, when student abuse – physical, emotional and sexual – was rampant at school. Legal action was filed in 2011 on behalf of 232 of the abuse survivors or their descendants, some of whom, now adults, provided detailed testimony in court. The lawsuit was resolved with a multi-million dollar settlement in 2015.

â€œIt seems like it was so long ago,â€ said Councilor Charlo, â€œbut our parents are among the survivors of this generation from whom we are not so far removed. This is something to be aware of, our history, both good and bad, with this place here. It will always be our homeland, it will always be what we are. I think we can recognize the bad things that have happened and hopefully as people we will grow and heal and move on. But never forget the people who sacrificed their lives for our generation. Without them we wouldn’t be here.

â€œWe must always be aware of our history,â€ he said. â€œMake sure you don’t repeat it, make sure you keep growing as people. We are resilient people. Either way, we survive, succeed and do well. We wouldn’t be who we are without our history and our past.

Cheryl Eagle, a Blackfoot and Lakota Indian, learned of the vigil and came from Butte. Eagle is a sexual abuse survivor. Her brother’s murderer never faced justice, and she said she was keenly aware of the trauma experienced by generations before her.

â€œI think we need to prepare for what’s going to be revealed here in the United States,â€ Eagle said. â€œAs Aboriginal people, our true healing will come by discussing what happened at residential school with our great-grandparents, grandparents and parents. We are a powerful people. We have been attacked. They tried to kill us and we are still here. What is happening now is a good thing, not a bad thing. As we approach the pain, we walk towards our healing. We are in a change.

Patrick Matt Jr., director of the Familes First program for the Confederate Salish and Kootenai tribes, said he was disturbed by the accounts of those who testified in the trial.

â€œTheir stories are horrible,â€ Matt said. â€œIt makes me tremble right now, what these kids had to go through. So when they call our people â€œsurvivors,â€ they mean survivors.

â€œSince these children are in our land which we call Turtle Island, one of the saddest things is that it doesn’t surprise me. … There is a new rage, a new anger. The Indian country needs answers.

Matt called for a â€œpowerful reconciliation in America,â€ asking members of the religious community to come forward with tribal, state and federal leaders to â€œcome together and sit at the table. People need to be heard, people need to be felt, people need to be spoken to, and so now is the time. It’s now.”

Reading the statements of survivors who testified in the trial, Matt said, â€œIt wasn’t the money. What they really wanted was for their stories to be heard, and for society, and for a judge or a jury to stand up and say, â€œYou’ve been wronged. We recognize as a people that you have been wronged.

The crimes, he said, were perpetuated because of “racism, hatred for our people, ‘manifest destiny’ and because we were people standing in the way of what others wanted. And our children weren’t as valued as theirs.

Clair Charlo, who works with the CSKT Tribal Defenders Office, spoke about those who were traumatized by schools not knowing how to become parents when they were growing up because they were “lost in their own trauma that led to addiction. “. Alcohol, she said, was probably responsible for 70% of crimes found in tribal court. Working with the grandchildren of residential school survivors, she said many were disconnected from their culture, turning to drug addiction and perpetuating “intergenerational trauma.”

Claire’s father was one of the local â€œday schoolsâ€ who returned home at the end of the day. But he has heard stories of what happened that night and still suffers from the guilt of not being able to help. Many of the deaths listed as caused by pneumonia were in fact suicides, she said.

Karissa Trahan-Sorrell read a love letter she wrote to her four children and to “all the children stolen by residential schools”. She found herself thinking, as she comforted her own baby, “It really hurts that there are children and babies who couldn’t be comforted in residential schools.” This is where it hurts the most, is as a mother. Because at the end of the day, they’re all kids and babies, whether you’re Indigenous or not, they’re still babies.

Home Secretary Deb Haaland recently announced a Federal Indian Residential Schools Initiative, a comprehensive review of the troubled legacy of federal residential school policies. This will include reviewing historical records with a focus on potential cemeteries or burial sites for future work on the site which many believe will find and identify deceased children in schools.

â€œThe Home Office will address the intergenerational impact of residential schools to shed light on the unspoken traumas of the past, no matter how difficult it will be,â€ Haaland said. â€œI know this process will be long and difficult. I know this process will be painful. It will not undo the grief and loss we feel. But it is only by recognizing the past that we can work towards a future that we are all proud to embrace.

Migrants: the murderous waters of the western Mediterranean