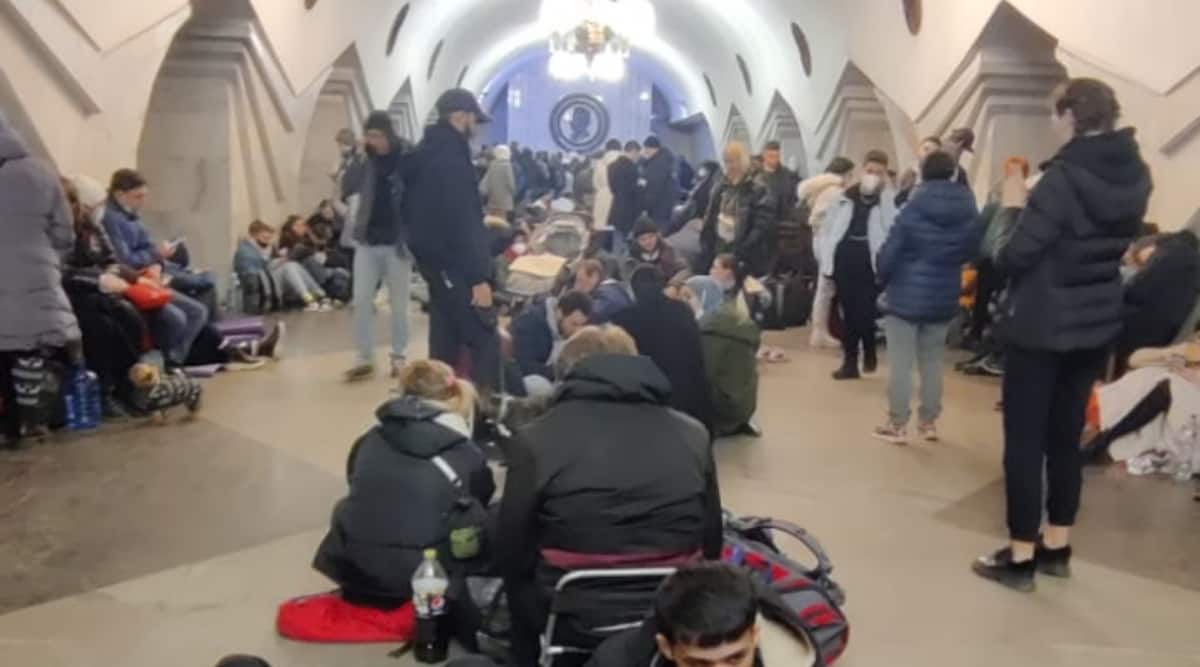 ‘The problem was that we trusted them’: Rajasthani students stuck in Ukraine say their universities misled them

As many as 23 more Rajasthani students were evacuated from Ukraine via Bucharest to Romania on Friday, bringing the total number to 57. The students will soon reach New Delhi and Mumbai, a Rajasthan government press release said.

Srivastava, while speaking to The Indian Express, said, “We have been trying to evacuate students for a few days now. But there were problems as flight frequency and availability were less than usual and fares were higher. There were even problems with the transit visas required for students.

Rajasthan BJP Chairman Satish Poonia in a letter to External Affairs Minister S Jaishankar said: “Many medical students and others are currently stranded in Ukraine and they are worried and in the current situation they will not do not feel safe. Poonia urged the government to ensure a safe return of students from Rajasthan.

Earlier on February 24, Russia successfully invaded parts of Ukraine and fired rockets, carried out air raids and dropped bombs. While some students in Rajasthan managed to return on February 23, many are still stranded.

“The government should have brought these students back earlier. There was a serious miscalculation in bringing them back. The decision was made later on February 22. Even Ukrainian universities made mistakes in judgment and asked students to stay calm and stay back,” Srivastava added.

Aryan Suman, a resident of Kota and MBBS student in the city of Chernivtsi, returned on February 23. “When I left, everything was fine. All roads and even Kiev airport were normal. But my friends, who were due to take off on February 24, were asked not to take their flights and to return to their hostels and apartments by the universities.

Anuj Chaudhary from Jaipur, an MBBS student in Ivano-Frankivsk, said: “My brother and I came back only because our father forced us to, but I’m glad we did. When we left everything was fine but as soon as we landed here my phone was flooded with photos and videos of explosions sent in by my friends from Ukraine. Ivano airport was hit by a missile and my friends tell me that the Russian army is visible everywhere. ATMs dried up and the food supply was hit.

Chaudhary added that air tickets cost around Rs 60,000 while usually a round trip costs him Rs 40,000. “Even our university made an error of judgement. They kept saying nothing would happen, it was all political pressure and things would calm down and our online classes would continue. This is the main reason why we never thought of coming back because 100% attendance is required in our university and for every class we miss we have to pay 600 rupees.

Pushpendra Meghwal from Udaipur, a 5th course MBBS student at VN Karazin Kharkiv National University, said: “At 5am on February 24, we heard explosions and were told to stay in underground bunkers since. Subway stations are filled with people from all over the world. There is no place to sleep. We returned to our apartments to collect provisions that we had stored in advance. We saw closed markets and deserted streets. We were in the apartment when another attack took place…it was extremely loud and even the buildings shook. We have a limited amount of food and water that we had stored and once they are exceeded, we don’t know what we will do? »

Many live in bunkers inside unheated underground subway stations and apartment building basements with minimal food, water and no blankets. (Express)

In Kharkiv right now, Mohit Kalal from Dungarpur who is pursuing MBBS studies at Kharkiv National Medical University said: “This is the worst situation I have ever witnessed. My parents are extremely worried. I want to come back as soon as possible. Kharkiv is in a very bad state at the moment. When I returned to my apartment on Saturday, I heard loud explosions and saw smoke billowing from the buildings. We sent emails and tweets to the Indian Embassy even before the war started, but received no response as they probably thought everything was fine. The government’s response was extremely late. Even the coordination between our university and the embassy was poor since our university kept telling us that everything was going to be fine and that classes would continue as usual. Our university asked us to stay back and convinced us that the situation would not escalate. The problem was that we trusted them.

The Ukrainian government imposed martial law in the country on Thursday. This would allow authorities to restrict the movement of civilians, block rallies and even ban political parties for national security reasons. This decision means that the army will apply the law and not the police.

Akshat Agarwal, a first-year MBBS student from OO Bogomolets National Medical University in Kyiv, a resident of Jaipur, said that since martial law was imposed, they could not get out at all because they would get shoot them if they did.

“We’re stuck and we don’t know how long it would take to get out. We don’t have food or water and we’ve been asked to stay calm, but how can we do that? It’s scary and horrifying, my roommate was at Kyiv airport when the Russian army attacked the place, he’s safe but we’re all worried about him.

Speaking about the situation in Kyiv, Agarwal said everything, including markets and transport, had been shut down and there was a sense of fear among students at his hostel.

“We constantly see fighter jets and airplanes. We run to the basement as soon as the street sirens go off before the attacks. For the past few hours, it has been going off every 5 minutes. We were also told that our building would be attacked by missiles, so we hid in the basement. But, thank God, nothing happened.

Agarwal also spoke about the difficulties he and his friends were having in getting in touch with the Indian Embassy. “There are a lot of hotline numbers but it is rare for anyone to answer or for us to get a proper response. Contacting the Embassy is extremely difficult. Even the government of Rajasthan has not contacted us directly.

After Ukraine closed its airspace, the Indian government sought to evacuate students from neighboring Ukrainian borders with Poland, Romania, Hungary and the Slovak Republic. The Indian government has asked students to reach the borders on their own or wait for transportation arrangements made by the government.

The government on Saturday issued an advisory to Indian citizens not to travel to border posts without prior coordination with Indian government officials at the border posts.

The notice said: “The situation at various border checkpoints is sensitive and the Embassy is continuously working with our embassies in neighboring countries for a coordinated evacuation of our citizens. The embassy is finding it increasingly difficult to facilitate the passage of Indian nationals who reach border posts without being informed beforehand. He added that those residing in the eastern sector and western cities of Ukraine should stay where they are.

Traveling to the Polish border with three of his friends in a car from Kyiv, Aakash Choudhary, an MBBS student from OO Bogomolets National Medical University, said: “The situation in Kyiv is extremely bad since troops Russians surrounded the city. There is smoke everywhere from the constant shelling. Russian planes and tanks are visible everywhere. It got really scary because this road was the only way out of Kyiv and there was talk of closing it as well and shutting down the internet. We decided to leave because it was the only possible option we saw.

While the government has made arrangements with neighboring countries, many students face a problem in reaching Ukrainian borders. Meghwal said: “I live in Kharkiv and the distance to the Polish border from here is 13 hours. With no one on the streets and all transport closed, how are we going to get there? »

Agarwal said, “Government arrangement is only possible after we reach the border, but we are not even allowed to go out here. Kyiv is in the center of Ukraine and to reach any border we need proper transportation. The situation here is extremely tense.

Meghwal said that although they are in constant contact with the Indian Embassy, ​​they want the Embassy to help them find suitable shelter.

“We understand that the evacuation process is time consuming and may take longer than expected, but we want the Embassy to help the Indians get proper shelter and more food and water as we will miss you soon.”

Another MBBS student, studying at Vinnytsia National Medical University, said: “We are not safe here. We have been living in the bunkers since last night without food, water or blankets. The embassy tells us that the student evacuation plan will be from Romania, Poland and Hungary. But how can we reach these borders if there are no means of transport. We just want to go home.