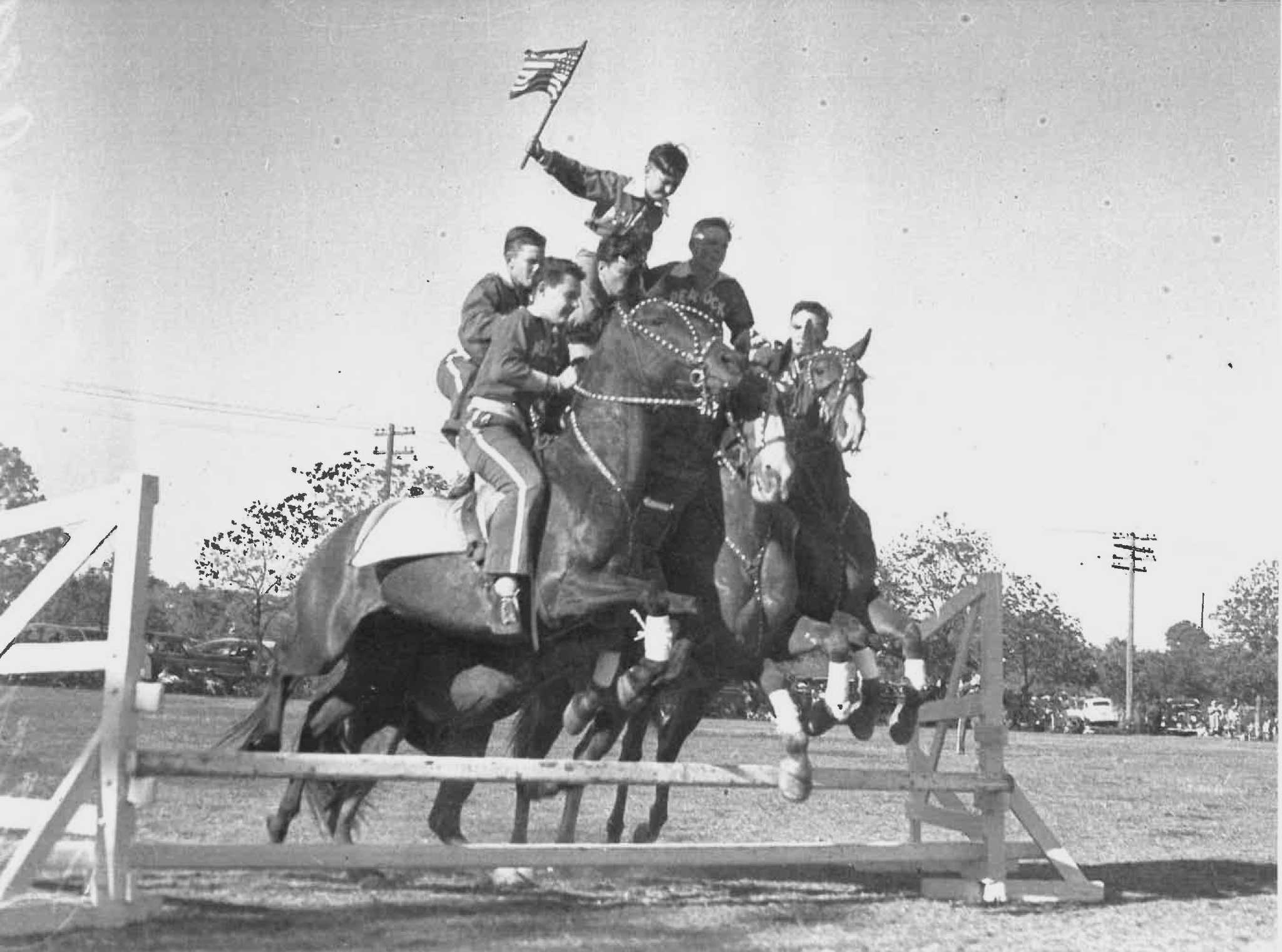 In the early and mid-1950s, my father was on the faculty of the Peacock Military Academy. The campus near Lake Woodlawn between Cincinnati, Wilson, and Woodlawn is now a Salvation Army residential and social service facility. The school was very prestigious in its heyday, with several alumni becoming increasingly prominent in the San Antonio community. I was very young when my father was at Peacock, but I have very fond memories of campus life, especially the annual parades during the Fiesta which included performances by the Zouave Unit and the Monkey Equestrian Team Drill.

The 1954 school year, titled “Kadet”, was dedicated to my father and Colonel Wesley Peacock Jr. I would appreciate knowing more about the history of the school and the Peacock family.

It was the kind of school that could only exist in its time, that is, from 1894 to 1973 – a relatively short period that spanned light years of social change.

When Wesley Peacock Sr. came to San Antonio in 1893, you could be superintendent of schools at Uvalde, as he had been, decide to start your own private school and name it after you, all at 29 without lots of experience. . (Two previous jobs would do – teaching in Jasper, principal in Uvalde.) Along with his wife, Seline, and their 2-year-old son Wesley Jr., the newcomer scouted a place in the sparsely populated West End (now Woodlawn ) because it looked promising and was served by a tram line.

He placed an economical but extremely confident advertisement for his new venture, Peacock’s School for Boys, in the San Antonio Light on December 10, 1894: “Number limited to 90. Days $8 a month; half price on city (street) cars. Practical training. Prepare young men for college. I give all the instructions myself. Wesley Peacock, Ph.B., University of Georgia.

Somehow, this terse entry inspired parents to send nine students to boarding school and 17 day students that first year, the school’s entry in the Handbook of Texas says. Eventually, even with the acquisition of 20 acres and a building program, Peacock would have to limit enrollment to 200, with students from many states, territories and foreign countries, especially Mexico.

It was not a denominational institution, unlike many in San Antonio at the time, and originally it was not a military school, but Peacock quickly caught on to a trend.

“During the Spanish-American War, the wave of patriotism resulted in the establishment of 83 additional military schools from 1898 (the year of the war) to 1907,” said John A. Coulter “Cadets on Campus: History of Military Schools in the United States.” Several other than Peacock which opened in San Antonio at the turn of the last century are listed in a state-by-state appendix to Coulter’s book: West Texas Military Academy (later Texas Military Institute) was founded by the Episcopal Diocese of West Texas in 1893. , Lakeside Classical Institute (covered here May 22, 2014) in 1905, Garden Military Academy and Marshall Training School (covered here March 4, 2017 and March 11, 2017) in 1908, and Lukin Military Academy in 1917. Coulter saw a photograph of Wesley Jr. dressed in “(Admiral George) Dewey style attire just before the Peacock School’s 1900 conversion to military.”

Advertisements in 1902 still called it “Peacock’s School for Boys”, but noted that it was “a military school” with an illustration of a boy (aged 8–22) wearing a similar uniform to the cadet hat of the United States Military Academy (West Point). and period jacket. The school was known as Peacock Military Academy or PMA in 1906. When the film “The Immortal Alamo” was made in 1910, the cadet uniforms were resplendent enough for Peacock students to play Mexican soldiers in the scenes of the 1836 battle. And no less a military hero than future General Dwight D. Eisenhower was hired to coach the Peacock football team in 1915 while stationed at Fort Sam Houston.

On ExpressNews.com: Pioneering filmmakers made a lost Alamo movie here

Peacock’s military identity grew rapidly in the early decades of the 20th century, with its corps of cadets receiving U.S. Army honors and the fledgling Veterans Affairs Office (later administration) renting space on the campus in the 1920s for a rehabilitation center.

The founder’s two sons, Wesley and Don – who took over administration of the school after their father’s departure in 1926 – both went on to pursue distinguished military careers, and most of the male teachers had also served. Students marched in Fiesta parades – woolen uniforms and all – and Woodlawn neighbors woke to bugle calls and watched the regular “dress parades” that polished the prowess of Peacock cadets in drills closer.

Most memorable of all, however, were a few elite units that showed off certain skills the San Antonians weren’t likely to see elsewhere.

One was the school’s famous Monkey Drill Team, an equestrian team that had to be seen to be believed (still possible at 25:41 of the KLRN-TV documentary, “Remembering San Antonio: The Good Times,” available on the PBS website, www.pbs.org). It was a group of expert riders with no hands (sometimes no helmets) who trained on the school’s stable of over 40 horses, including safer chutes, until they be prepared to perform acrobatic stunts that stunned onlookers at local horse shows.

The Elite Team’s name comes from a cavalry tradition of combining or “monkeying” with well-known tricks and moves in a dazzling improvisational sequence.

While serving at Fort Clark, a cavalry post near Brackettville, Don Peacock was inspired by such a team and returned home to form the first PMA Monkey Drill team.

“A typical team consisted of 10 to 14 boys and a few ‘backups’ in case someone fell,” explains Donna Peacock in “Parade Rest: Book One, Peacock Military Academy, 1894-1941”. Using unusually long reins and “sturdy pads” instead of saddles, riders practiced stunts, including “Roman riding”, standing and riding two or more galloping horses at a time.

Audience at an interscholastic horse show (pictured in this column, April 2) ‘didn’t know what to expect’ from a ‘Monkey Drill Team’s roster of programs,’ a story in the Light says , May 9, 1937. The six horses with blankets tied in place of a saddle galloped and galloped as the young riders rose to stand on the backs of their steeds and launched into the an even more amazing stunt of riding two tied horses at once, reminding some of “The show the Fort Clark monkey drill crew put on at the (Texas) centennial (in Dallas) last summer.” This sight “seemed to be too good to come from a group of school children”, says the Light. “The young people put some spice back into a one-day program that was bogged down for lack of variety.”

In the show’s typical finale, says Donna Peacock – Don Peacock’s daughter – the riders formed a pyramid of four boys on four horses, with the fourth and smallest boy standing on the shoulders of the middle team member and holding an American flag, and ending the routine with a daring backflip by the tallest student, “caught by the seat of his pants by his standing teammates.”

The team performed from 1935 to 1957 at rodeos and horse shows across Texas and Mexico and must have been great publicity for what the boarding school could do to whip a boy into crackerjack shape.

More from Paula Allen: The uniforms of the military schools were numerous, varied

Another visible element during the field days was the Peacock Zouave unit. The boys in this unit wore a distinctive uniform consisting of trousers, waistcoat, blouse, tassel sash and MC Hammer fez, derived from 19th century Algerian troops in the army French and much copied by Civil War outfits on both sides. They were known for their fast-paced, precision drilling maneuvers and a popular display of wall scaling.

In 1948, King Antonio XXVI Park Street saw the Zouaves during his annual visit to Peacock scale a 12-foot wall in a record time of 49 seconds, according to an article in the Light of April 28, 1948, titled “King Sees Peacock Strut.”

The school was booming then, attracting prominent families with its blend of tradition and innovation. In a few decades, however, the “oldest private school in Texas under continuous family management” would be challenged by new trends in society at large.

Next week: The Peacock Triumvirate (plus one); family final