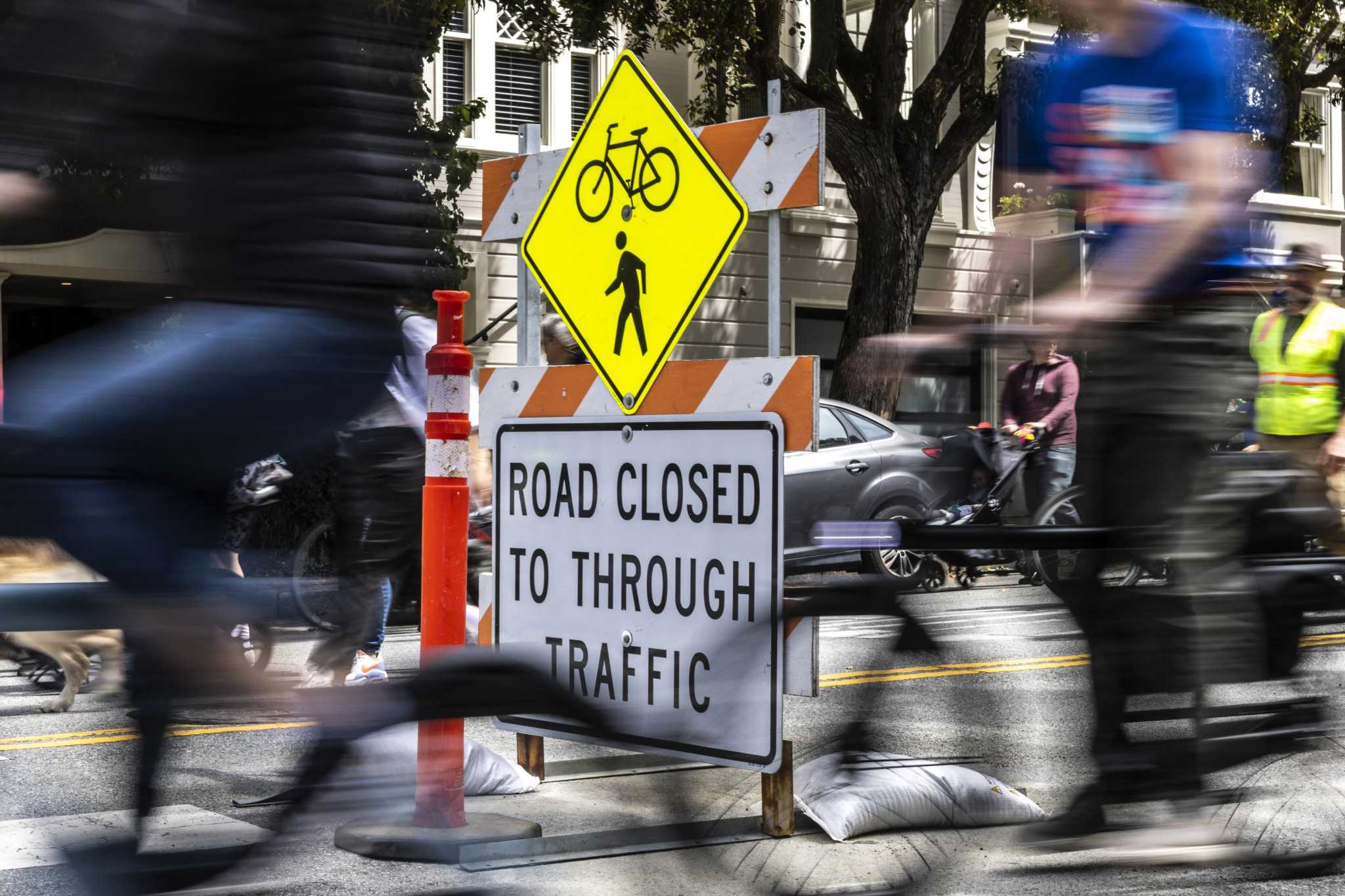 SF’s Slow Streets face a crucial vote on their future. Does the Mayor of London Breed support them?

San Francisco officials could soon make changes to the pandemic-era neighborhood road closures that are dividing through-traffic, with a vote expected next month on a permanent Slow Streets program.

The city’s transport agency must decide the program in a politically tense environment that Mayor London Breed also navigates.

From the earliest days of the pandemic, the city closed 31 streets to through traffic to make room for people to walk and ride bikes. Last year, four roads – Lake Street, Golden Gate Avenue, Sanchez Street and Shotwell Street – won approval to become “post-pandemic” slow streets. This decision was followed by community sensitization on the future design. The resolution for last year’s vote said “the decision to make Slow Streets permanent will be subject to applicable public hearings, approvals and review.”

In September, the San Francisco Municipal Transportation Agency Board of Directors will vote on a permanent program that includes these streets, and may add or remove others.

The fight over slow streets mirrors other bitter debates in San Francisco over how the city should use its public roads and how to balance competing needs, with disputes over JFK Drive in Golden Gate Park and the Great Highway equally intense.

Breed has not publicly stated whether she supports the continued existence of Slow Streets. The mayor appoints MTA board members, who have “complete discretion” to remove or add slow streets, an agency spokesperson said.

Breed wrote in a blog post last Friday that as a resident she “enjoyed” seeing the impacts of Slow Streets, but the program “needs to evolve.”

She said the city would make decisions about a permanent network based on accessibility, safety and reduced emissions, “not just to provide exclusive routes or turn public streets into private streets for local residents.” Some Slow Streets routes make sense and some don’t, while others should be considered for new interventions, she said. She said advocacy often focuses on wealthy areas and low-income communities are “left behind”.

But Slow Streets supporters say internal documents and conversations with MTA staff show the mayor is lukewarm on the program and his staff are lobbying to roll him back. After months of lobbying by both sides on Lake Street, culminating in a design that supporters oppose, Breed policy director Andres Power expressed a “strong preference” in a June email. to remove Slow Streets signs ahead of the September vote, despite being told they must stay to comply with the policy.

However, a document says Breed staff support the programs — its transportation consultant, Alexandra Sweet, asked MTA staff in a May email for safety statistics to “reinforce our reasons for maintaining this program.”

Mayor’s spokesman Jeff Cretan said the city will end the pandemic-era program when the COVID emergency ends and create a citywide connected network, and denied the documents, which he says were taken out of context and misinterpreted, show that Breed staff led the process. .

Opponents say the mayor’s office provided a balanced view of the program, relaying the concerns of both sides to the MTA, which they said was more in line with supporters.

Transit activist Chris Arvin, a member of the MTA’s Citizens’ Advisory Council, said internal documents obtained show Breed’s team was involved in the cancellation of the program. The mayor’s transportation adviser wrote on a document shared with MTA staff in April that “we plan to lay down ‘slow streets and transition roads’ back to their original use or to nearby streets, which are quiet, residential streets, with less frequent traffic diversions.”

Cretan said “there are a lot of theories and conspiracies,” but the city is ending Slow Streets in its emergency form, one of several pandemic programs adjusted to become permanent.

Arvin said the mayor seemed to be reversing her stance from 2020, when she tweeted that Slow Streets had transformed neighborhoods “and will continue to do so even after this pandemic is over.”

Supporters say if the mayor is serious about climate change, we need more slow streets.

They point to the city’s climate policies that aim to reduce carbon emissions by 80% of trips by 2030 and recommend expanding slow streets. Supporters also point out that the city is not making progress on its goal of eliminating road deaths by 2024, but data shows that collisions and vehicle speeds have decreased on slow-moving streets.

Luke Bornheimer, a Slow Streets supporter, said documents show the mayor ‘trying to dismantle the Slow Streets program’, which he called a ‘failure of leadership’ on climate change and transportation safety in common.

Others are also convinced that the mayor is not a huge fan. A former MTA employee, whom The Chronicle does not name in accordance with its anonymous source policy, said MTA staff have long known the mayor was “ambivalent” about Slow Streets and that Breed was not willing to support the program because it is a “political mess”.

Slow Streets supporters are concerned about the future of the program, particularly after the city proposed a design for Lake Street that advocates a reverse lane to keep traffic from crossing the road.

Documents obtained by supporters show that prior to the design proposal, the mayor’s office and MTA staff met and corresponded with both parties for months.

Members of Open Lake Street, which has more than 3,000 members on its mailing list, said the closure has worsened traffic congestion, speeding and pedestrian safety on nearby roads. MTA data shows traffic and safety on nearby streets didn’t change much in February.

February data from the MTA shows traffic and safety on nearby streets haven’t changed much.

Tina Han and Alison Fong, who both live on Lake Street, said they were unaware of the vote to make the closure permanent last year, and MTA’s outreach for its investigation was inadequate. for people who do not speak English or are not. techie.

MTA spokeswoman Erica Kato said the agency had conducted an extensive awareness campaign. A February poll showed that more than 53% of Richmond District residents and 83.5% of Lake Street residents wanted a slow street.

Fong and Han said they want a comprehensive strategy to meet the city’s climate change and traffic safety goals that addresses the concerns of all residents, such as families who must drive their children to school. school. For Han, the issue was fairness, since only some residents benefited from a safer route.

Breed met with both sides of the Lake Street debate in January. His transportation adviser said in a December email that the group opposed to Slow Lake was “important to the mayor.”

Fong said his group did not receive any promises at the time. In March, a day after meeting with MTA and the mayor’s staff, the group told its mailing list that “the mayor has asked SFMTA to re-evaluate the entire Slow Streets program.” Cretan said the statement “isn’t entirely accurate,” saying staff informed the group they were already working to turn the emergency program into its permanent form.

In June, the MTA proposed a design with traffic-calming measures they said would make Lake Street “less accessible” to through traffic, but Slow Streets supporters protested that it would not eliminate through traffic, which they say is key to making the street safe. Ten days before a public hearing on the design, Breed’s transportation consultant wrote MTA staff a list of agenda items for the meeting that included “Going ahead with Lake Street – open it with traffic calming.

Critics say it shows his staff ran the result of a “fictitious” hearing. The former MTA employee said the watered-down design and involvement of the mayor’s office was “deeply flawed.”

Cretan denied that any decisions were made on Lake Street before the meeting, which was called off. He said the agenda laid out what could possibly happen so the mayor has a full picture of the eventual outcome, but that was not the only meeting where options were discussed.

Kato said MTA’s approach to Lake Street evolved after public feedback. The agency held a hearing on traffic-calming measures on the street on Friday, with a decision expected next week, although the mayor’s adviser had already said in a June email that the agency had intends to move forward “as soon as possible”. The design could change if the board gives a different direction in September.

Supporters say the future of Slow Streets depends on political will and pressure.

“Safer streets are something we have to fight for,” Arvin said.

Mallory Moench (her) is a staff writer for the San Francisco Chronicle. Email: [email protected]: @mallorymoench

Nigerian universities are good, if not better than foreign institutions: Garba Shehu