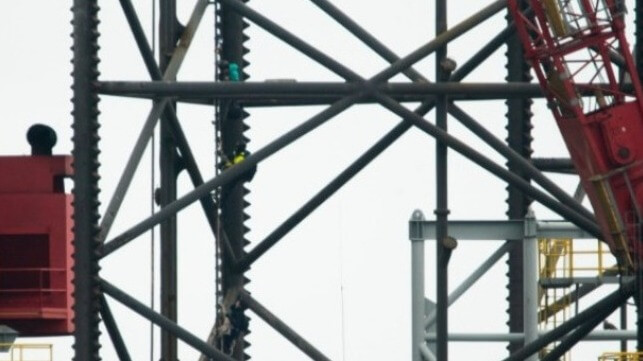 Seven activists from the climate action group Extinction Rebellion were fined in connection with a protest aboard an offshore platform in Dundee, Scotland, in January 2020.

The demonstration took place aboard the jackup belonging to Valaris Valaris JU-122 (Ensco 122), which was preparing to leave the River Tay for a drilling campaign for Shell. XR’s goal was to prevent the platform from leaving port, and the group scheduled the operation to last up to 10 days.

Seven activists approached the platform in a small rubber tire and attempted to climb onto it. However, weather conditions in early January in Scotland did not match their plans: the three people who managed to board the platform had to disembark within five hours due to high winds.

Local police, the Royal National Lifeboat Institution (RNLI) and other agencies incurred a total expense of approximately $ 40,000 for the response to the boarding.

After the action ended, the police arrested the seven people in connection with the arrest. The activists were identified in court documents as Federico Pastoris, 25, Mark Quinn, 23, Marco Tenconi, 24, Guy Bowen, 32, Alison Orr, 28, Joanne Venables, 36, and Fiona Cormie , 27 years old. (Cormie, Venables and Orr were the only three who accessed the platform and climbed on its jack-up legs, according to the local sheriff’s deputy.)

In March 2021, all seven pleaded guilty to direct action misconduct. On Monday, a judge fined them $ 200 each and an additional donation of $ 330 each to the RNLI.

“I have no objections at all to the message you all tried to send, just the way you tried to send it, which caused the Coast Guard, Police and Rescue Services worry, expense and tremendous effort to ensure your own safety, â€said Sheriff Grant. McCulloch, according to The Courier: â€œI think it’s appropriate that each of you make a contribution to the RNLI.