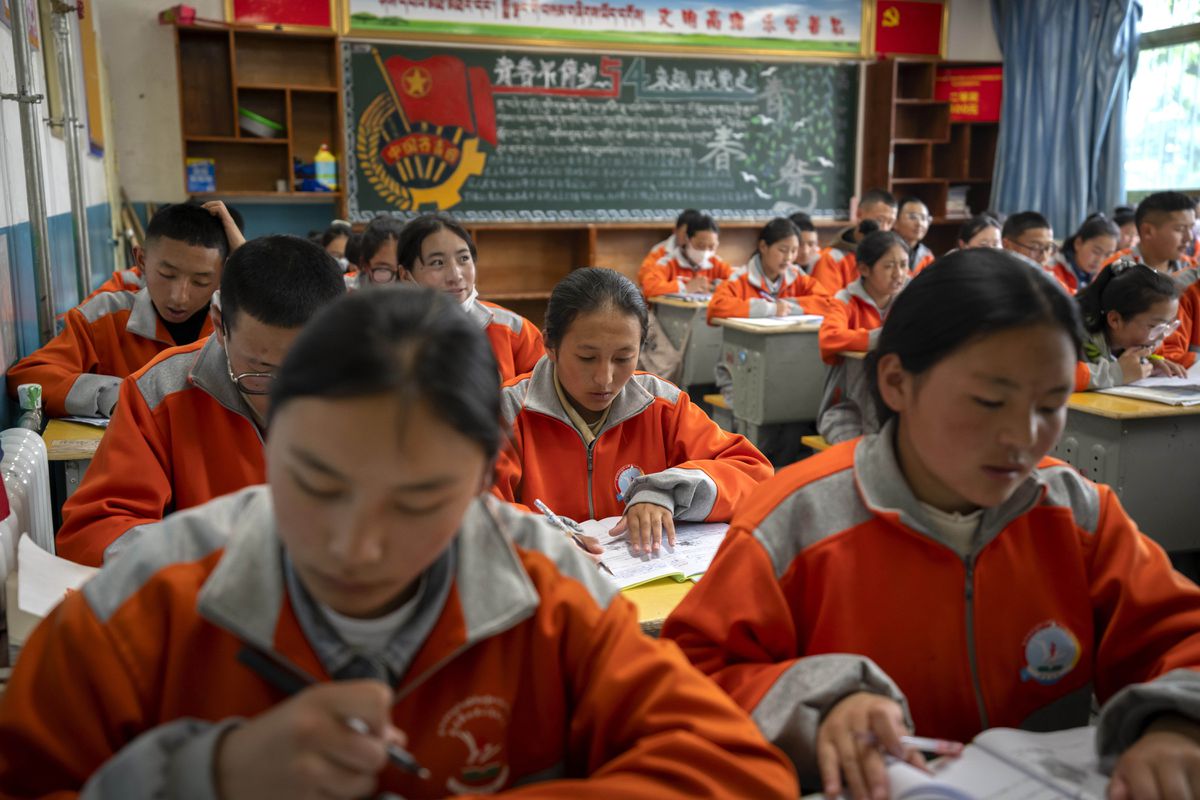 Almost 80% of Tibetan children in China have been placed in a large system of government-run boarding schools, where they are cut off from their families, languages â€‹â€‹and traditional cultures, according to an analysis of official data by local authorities. researchers of Tibet Institute of Action.

The US-based NGO found that more than 800,000 Tibetan children between the ages of six and 18 “are now housed in these state-run institutions.”

â€œThe colonial boarding school system in Tibet is a central part of the Chinese Communist Party’s systematic efforts to co-opt, undermine and ultimately eliminate Tibetan identity in an effort to neutralize Tibetan resistance to Chinese rule,â€ the group said in a report released Tuesday.

For years, Tibetans have sounded the alarm bells about what they see as Beijing’s assimilationist policies. Academics agree that the implementation of such policies has intensified following large-scale unrest in parts of Tibet in 2008 and the coming to power of Chinese President Xi Jinping in 2012. Growing crackdown in Tibet has coincided with a crackdown in the neighboring Xinjiang region. in recent years, which has seen around two million ethnic Uyghurs go through a system of “re-education” or “de-radicalization” camps.

While boarding schools for Tibetan children have been state-sponsored for decades, the scale of the system and its growth since 2008 has not been previously reported. The Tibet Action Institute used official data to estimate that 806,218 Tibetans between the ages of 6 and 18 are currently attending boarding school, or 78% of the 1,039,370 children attending school in Tibetan regions.

Much of the data is publicly available and supported by other official Chinese documents and statements reviewed by The Globe.

China’s Foreign Ministry did not respond to a request for comment sent by fax. In the past, officials have defended education policies in Tibet saying they are aimed at alleviating poor educational standards and widespread poverty in the region and claiming that “bilingual education” protects and promotes Tibetan languages â€‹â€‹alongside from Chinese.

When Tibet was invaded by the People’s Liberation Army in 1951, the Chinese government promised that the â€œbeliefs, customs and religious habits of the Tibetan peopleâ€ would be respected.

After an uprising in 1959, the Dalai Lama – the spiritual leader of Tibet but also a former political leader, as his predecessors often were – fled to India, and Beijing took full control of the Autonomous Region of Tibet. Tibet. Since then, Chinese leaders have remained nervous about potential support for Tibetan independence, which they generally blame on foreign actors, including the â€œDalai separatist cliqueâ€.

At times, Chinese rulers have promoted and protected Tibetan languages â€‹â€‹and culture. This peaked with the constitution of 1982, which states that â€œpeople of all nationalities have the freedom to use and develop their own spoken and written languages â€‹â€‹and to preserve or reform their own customsâ€.

At the time, Tibet was, as it is today, one of the poorest regions in China, and Beijing made significant investments in education, including the establishment of a few boarding schools.

A Tibetan who attended one of these schools – which the Globe and Mail identifies as Tenzin so he could speak freely, regardless of his family in Tibet – said that while teaching was still widely taught in Tibetan, “the content of what we studied was almost entirely Chinese.

“The history we studied was entirely communist or China-centric, even when we were studying world history.”

Kunchok, a Tibetan now living in exile in New Delhi who asked to be identified only by his first name, said he was sent to a boarding school in Markam, an eastern town on the border with Sichuan, in 2000, when he was seven years old.

â€œWe weren’t allowed to go home on weekends or holidays – the whole time [my first year] I haven’t seen my parents, â€he said.

Widespread unrest ahead of the 2008 Beijing Olympics, along with chronic poverty and economic hardship in Tibet that some officials have blamed on limited use of the Chinese language, have prompted Beijing to rethink its policies in the region. – just as Mr. Xi came to power.

“There was a feeling that the education and propaganda work had not been taken as seriously as it could have been, with too much emphasis on ethnic autonomy,” said James Leibold, expert in Chinese politics and ethnic minority politics at La Trobe University in Melbourne. .

Tenzin also linked the policy change to the events of 2008. “If you look at a map of Tibetan protests and self-immolation protests, they overlap with places where there was a strong cultural or linguistic identity,” he said. he declared. “Almost all of Qinghai and Gansu counties [provinces] were converted to Chinese middle school education. There is a policy to reduce any place for Tibetan language learning or cultural spaces, to suppress potential future manifestations. “

In a speech in 2014, Xi stressed the need to “bind the peoples of every ethnic group with a single strand of rope.” The following year, the Council of State urged the authorities to “strengthen the construction of boarding schools” in ethnic minority areas and “regularly promote bilingual education”. The latter policy has in fact led to the teaching of Chinese first in practice and the continued marginalization of Tibetan and other non-Chinese languages, according to a 2020 Human Rights Watch report.

Peng Shuai showed how to speak the truth to power, and not to him. Time’s Up should learn the lesson

By 2016, even a state media report noted that almost all schools in Tibet used Mandarin Chinese as the primary language of instruction. He added that some parents and teachers “have taken steps by opening Tibetan language schools.”

Many of these alternative schools, often run or managed by Buddhist monks, have since been closed. According to Amnesty International, in 2018, the government urged the public to report groups that run Tibetan language classes, calling them “criminal gangs linked to the Dalai Lama’s separatist forces.”

Xi himself oversaw this shift in assimilationist politics, according to classified documents leaked to the Uyghur Court, an independent UK-based body that examines allegations of genocide and other crimes in Xinjiang. Documents released by the group include speeches by Xi from the mid-2010s demanding that children in western China be sent to boarding schools “to study in school, to live in school.” , grow up in school â€.

“Many other policies designed to assimilate and control the region’s ethnic groups, including Chinese (Mandarin) language education in centralized boarding schools … may be directly linked to Xi Jinping’s statements or explicit demands,” he said. writes academic Adrian Zenz in a summary. documents disclosed.

Tenzin, who now lives in the United States, said that â€œnow children as young as five are being taken from their hometowns and their surroundings and placed in this school system.

â€œWhen you are cut off from your language, your culture and your history, you lose a sense of who you are, and ultimately you feel like you are losing the very fabric of your humanity,â€ he said. . “You don’t feel complete.”

Speaking at a press conference in 2019, Wu Yingjie, party secretary for the Tibet Autonomous Region, praised the â€œcentralized school system,â€ as the boarding school network is sometimes called, saying that it could help solve “the problems of the vast area of â€‹â€‹Tibet and sparse population.”

Sichuan officials recently released a “Ten-Year Action Plan for the Development of Education in Ethnic Minority Areas,” which calls on local governments to “advance the boarding school system” with the aim of increasing capacity for 820,000 students by 2030.

In the TIA report, the authors directly compared the situation in Tibet to that of colonial societies elsewhere, including Canada. This year, researchers in Kamloops, British Columbia, uncovered the anonymous graves of more than 200 Indigenous children, forcing Canada to consider the horrors of the residential school system. Since then, more mass graves have been discovered, prompting calls for further measures and repairs.

One of the report’s authors, Lhadon Tethong, said her research into the residential school system resonated with her not only as a Tibetan but also as a Canadian. She was born in Victoria and attended the University of King’s College in Halifax.

â€œThe parallels were very stark,â€ she said. “We are fully aware that the situation in Tibet is not the same as for First Nations people in Canada, but what is clear is that the state’s objective in separating children from their families is the same. The main thing is to eliminate identity and to transform children into something that they are not, to take the language out of their tongue, to remove the cultural roots from below them.

When the Kamloops and other anonymous graves were discovered this year, Chinese state media extensively covered the story, while authorities took the opportunity to highlight Canada’s abuse and mistreatment of indigenous peoples. .

â€œIndigenous lives matter,â€ Foreign Ministry spokesman Zhao Lijian said in June. â€œCanada claims to be a model of human rights and an open advocate. However, he is reluctant and blind to his own crimes and human rights stains which can never be erased or justified. Such hypocrisy and a double standard is shameful. “

Our Morning Update and Evening Update bulletins are written by the editors of The Globe, giving you a concise summary of the day’s most important headlines. register today.