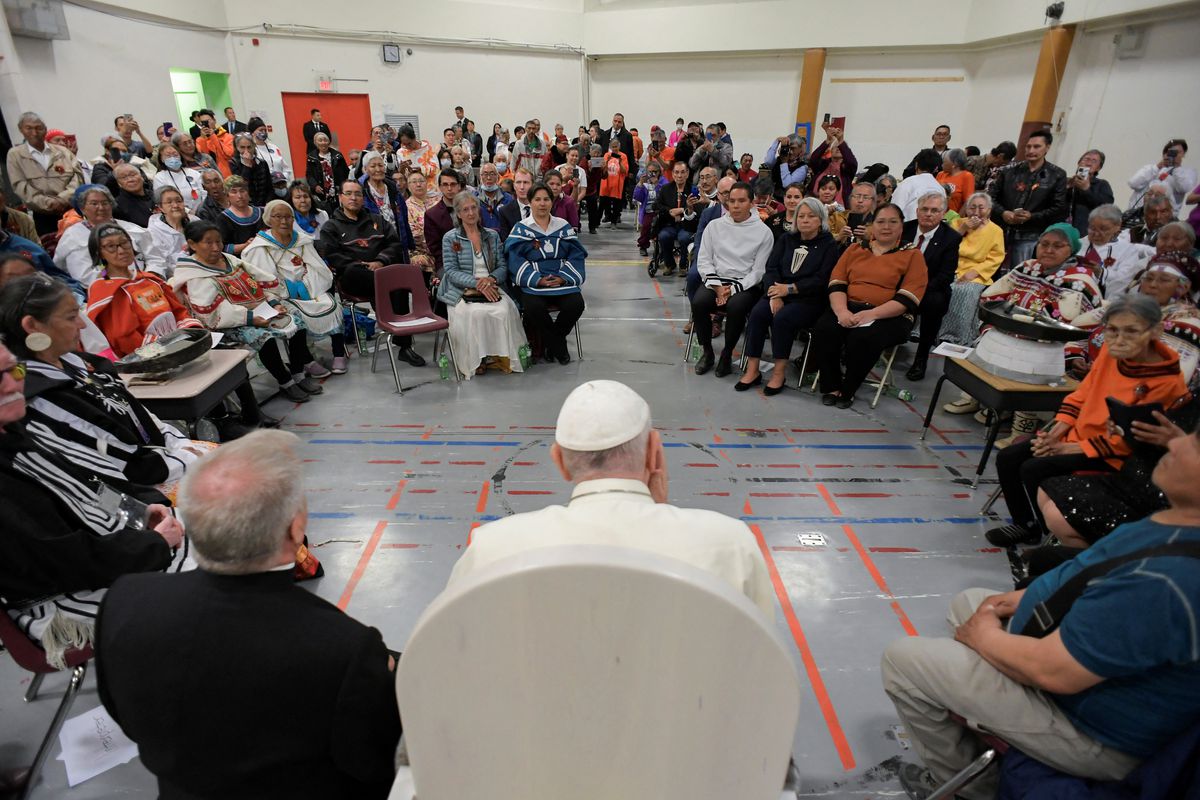 In Iqaluit, Pope Francis’ final stop on his historic six-day tour of Canada, his address to Inuit youth and elders in the plaza of an elementary school alternated between expressing regret for the sins of the Catholic Church and providing encouraging guidance to girls and boys seeking direction.

Her trip to Canada, from Alberta to Quebec to Nunavut, focused on dealing with the traumatic legacies of residential schools and colonization. On Monday, near the site of a former residential school in Maskwacis, Alberta, the pontiff acknowledged that many Christians had oppressed Indigenous peoples, including through cultural destruction and forced assimilation promoted by the residential school system. On Wednesday, in Quebec, the Pope once again apologized.

On Friday, he met with several survivors from the school in Iqaluit before an outdoor performance that included traditional throat singing and drum dancing. His speech in front of hundreds of people began with another apology for the “evil perpetuated” on indigenous peoples by church members. Speaking in his native Spanish, Francis’ speech was translated into English and Inuktitut. He told them he was sorry in Inuktitut, a significant gesture for many onlookers.

“Thank you for having the courage to tell your stories and share your great suffering that I could not imagine,” he said in Spanish. “It only renewed in me the outrage and shame I had felt for months.”

The pontiff’s tour fostered the healing of some school survivors and the anger of others.

Last March, Francis met with First Nations, Métis and Inuit representatives in the Vatican, including survivors. After those meetings, he said he was sorry for the “deplorable conduct” of church members who abused children in residential schools and vowed to visit Canada.

Many Indigenous leaders and survivors had hoped he would expand on his remarks during his visit to Canada and issue an institutional apology. Although he repeatedly expressed his deep sadness and shame for the actions of many Catholic members and institutions, he did not apologize for the role of the Catholic Church in overseeing the schools, which were funded by Governments.

In 2015, the Truth and Reconciliation Commission called on the Pope to apologize to Canada for the Church’s role in schools.

Early Friday, before his flight to Iqaluit, Pope Francis held a private meeting with an Indigenous delegation at the residence of the Archbishop of Quebec, Cardinal Gérald Lacroix. At the end of the meeting, Ghislain Picard, regional chief of the Assembly of First Nations for Quebec/Labrador, declared that it will be up to everyone to decide if the Pope’s trip met their expectations.

“It’s really up to them to take the measure of it all, if it’s going to provide that kind of a path for their healing,” Mr. Picard said after the meeting. “That is going to take time.”

For Johnny Kolok, 60, the Pope’s speeches throughout the week did not go far enough. As he awaited Francis’ final remarks in Iqaluit, he said the pope appeared to be letting the Catholic Church as a whole off the hook for the serial abuses it was responsible for in residential schools.

“It seems he doesn’t want to name the church itself in these crimes,” said Mr. Kolok, a local property manager for an Inuit business. “We have a lot of people who have been taken from here. The nuns and priests who are still there and who participated in these abuses should be held accountable. »

Francis’ brief visit to the capital of Nunavut marks the first time a pope has visited the territory. Organizers had dressed the event stage to look like a qammaq – a type of traditional Inuit house often built using turf as a foundation, animal bones as a structure and sealskin as a covering.

It was a type of house that Piita Irniq, a former commissioner of Nunavut, lived in seasonally with his family while growing up in Naujaat (formerly Repulse Bay). In 1958, at the age of 11, Mr. Irniq was taken from his parents by Catholic priests and flown to a boarding school in Chesterfield Inlet, at the northwest end of Hudson Bay.

“I had never been on a plane before they took me away from my parents,” the 75-year-old, who now travels the world to share his knowledge of Inuit culture, said in an interview. to the Globe and Mail earlier today. the week.

At Sir Joseph Bernier Day School, he and the other students were not allowed to use their Inuit dialects. He recalls a time when a nun painfully slapped his open palm with a long ruler for speaking in Inuktitut with her peers.

Mr. Irniq predicted that the ceremony with the pope would be a “memorable” occasion for the Inuit, a chance to showcase a culture that has resisted decades of attempts to dismantle it by several institutions in Canada, including the Catholic Church.

“He is going to see our culture. He will hear our language,” said Mr. Irniq who apart from participating in the private audience with the pope also performed a drum dance in front of the crowd gathered outside Nakasuk Primary School.

Mary Eetoolook, who is from Taloyaok, was in the private audience for residential school survivors with the pope ahead of the public event. In 1959, Mrs. Eetoolook and her brother were taken to the Sir Alexander Mackenzie residential school in Inuvik when she was 8 years old.

Of the pope’s visit to Iqaluit, she said, “That’s why I didn’t go south, to Edmonton or anywhere else. I wanted to stand on Nunavut soil, in my homeland, when he apologized. And I’m glad he came.

“I’m here for my parents because my parents had no way to say no. Even if they said no, they would still take us. They put us on a plane and took us away.

Another survivor was Paul Quassa, former Premier of Nunavut. Mr. Quassa was not allowed to watch or talk to his two sisters while he and his siblings attended Joseph Bernier School, except for an occasional reprieve from this rule on some weekends.

In an interview with The Globe earlier this week, he recalled the impact Catholic and Anglican missionaries have had on his home community of Igloolik, located on a small island off the northeast coast of Qikiqtaaluk region in northern Nunavut.

“It was a community that was split in two. Igloolik was more like Northern Ireland in the 1960s, family against family, because of religion,” Mr Quassa said. “That’s how they tried to destroy us, but they couldn’t. They never succeeded. »

Mr. Quassa was the chief negotiator of the Nunavut Land Claims Agreement that led to the territory’s creation in 1999. He said his experience at the Chesterfield Inlet residential school inspired him to fight for self-sufficiency and Inuit self-determination.

“That’s why we got Nunavut,” he says. “To ensure that our future generations never experience what we experienced, when we weren’t allowed to speak our own language.”

As the final leg of the Pope’s tour of Canada, the visit to Iqaluit also raised the question of what comes next.

While it was an emotional moment, Mr. Quassa on Monday welcomed the pope’s apology to Maskwacis, which he watched on TV from Iqaluit. However, “[Francis] emphasized that Canadian Catholic Bishops need to follow up on some of these steps that need to be taken,” he noted.

In his view, this means bringing retired Catholic priest Johannes Rivoire to Canada. For years, survivors in northern Canada have alleged that Mr. Rivoire engaged in a pattern of sexual abuse at several Catholic schools over several decades.

In March, Mr. Rivoire, now 93, was charged with sexual assault as part of a Canada-wide warrant from the RCMP in Nunavut. On Wednesday, the Federal Minister of Justice confirmed that an extradition request had been sent to France, where Mr. Rivoire currently resides.

“We need justice,” Mr. Quassa said. “We know very well that many of these attackers have left. Even if we see one or two, I think it will satisfy us, for those who live. Because no parent would ever want to see their children end up in this situation. It is criminal. It’s degrading. »

With a report from The Canadian Press

Our Morning Update and Evening Update newsletters are compiled by Globe editors, giving you a concise summary of the day’s most important headlines. register today.