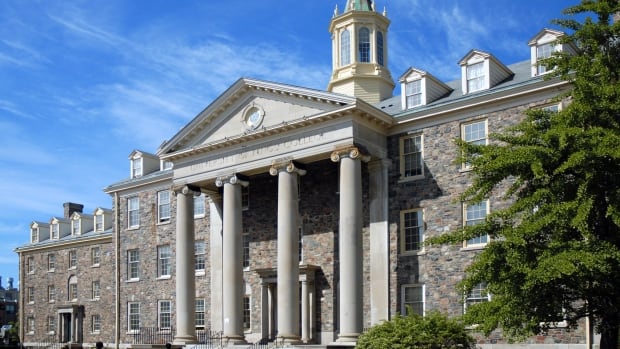 Nova Scotia is home to some of the oldest universities in the country. The 10 institutions are steeped in history and tradition.

Many of them are also in poor condition.

Government documents released in response to an access to information request show schools face a combined deficit of more than $ 600 million in deferred maintenance.

“A number of universities have approached the province for support for capital plans to replace or renovate existing infrastructure,” according to the briefing prepared for Minister of Higher Education Brian Wong.

“To balance their budgets, universities are delaying spending on maintaining aging infrastructure.

But according to the CEO of the Association of Atlantic Universities, the shortfall is much higher than what the briefing note indicates.

“In the projects that we have identified, only in the areas of green energy efficiency, accessibility and digital infrastructure, our last assessment, which was carried out very recently, shows that the deficit is around 1, $ 3 billion, “said Peter Halpin in an interview. Tuesday.

“So this is a very important problem.”

Halpin said deferred maintenance, or renewal of campus infrastructure, is “the most critical issue” facing universities and is her organization’s # 1 priority when advocating with provincial governments. and federal for their support.

The situation poses a financial threat to universities in the province, he said.

“It’s no different than being a homeowner. You can’t live with a leaky roof or windows, because that ends up affecting the integrity of the whole structure.”

The organization has spent the last few years trying to get the federal government to invest in campus infrastructure for all universities in Atlantic Canada. They put special emphasis on projects related to green technologies, energy efficiency, digital infrastructure and accessibility, said Halpin.

Provincial governments are important partners in these efforts and Halpin said he hoped they could be allies in advocating with Ottawa for more support.

The provincial minister of higher education said he heard about the issue before when he started out as a member of the new provincial government.

“As far as deferred maintenance goes right now, it’s just a topic we’re talking about to see how we’re moving forward,” he said.

The Conservatives have pledged big cash infusions to help address challenges in the health care system and the affordable housing market, but Wong said that does not mean there is no money for more. other issues.

Universities receive annual funding from the province through a memorandum of understanding, along with other allocations. Wong said how these allowances are spent is up to university officials, although this is not always the case.

The province provided universities with $ 3.6 million in 2018-19 and $ 20 million in 2019-2020 specifically for deferred maintenance, according to the briefing note.

The public benefits from university infrastructure

Halpin said universities are public institutions and his organization continues to advocate for the province to play a significant role in capital investment. He said the public and communities can benefit from access to things such as sports and recreation facilities, meeting spaces, libraries and art galleries.

While there is a correlation between maintenance needs and the size of universities, Halpin said the age of institutions is also a factor. He cited the University of King’s College in Halifax – one of the smallest but oldest universities in Canada – as an example.

“They have real challenges in terms of maintaining the infrastructure on this campus – not just maintaining it, but bringing it to a quality that you know meets the expectations of students today.

“And it’s no different for many of our universities across the province.”

After mismanaging suicide, Reflections Academy will close on Saturday | 406 Politics