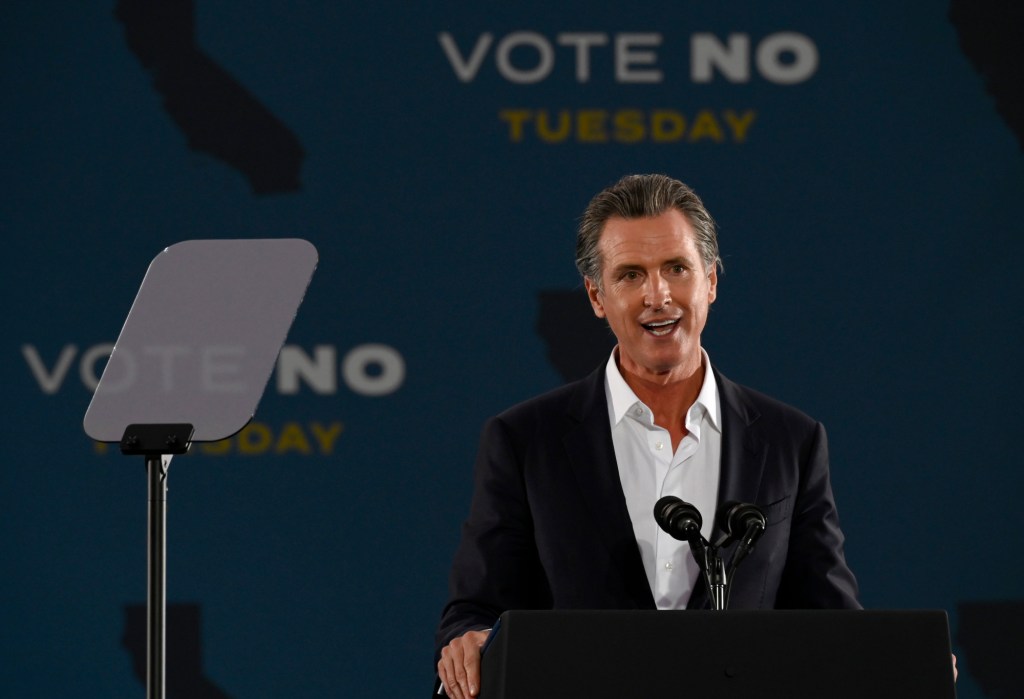 Governor Newsom’s victory in the recall election should not be interpreted as a vote of confidence. With Republicans making up only a quarter of registered voters and anti-recall forces spending more than double of all other candidates combined, there was little doubt of the result.

Despite this result, Californians seem unhappy. In the past two years, 500,000 more people have left California than those who have moved there. This net flow of people â€œvoting with their feetâ€ explains why California lost population for the first time in its history and why it will lose a seat. in the House of Representatives. This is happening as Texas and Florida and five other states will likely each add a seat in the House.

The fact that so many people choose to disrupt their lives and incur the expense and emotional trauma of leaving their home countries reflects deep-seated issues that will not go away with the defeat of Newsom’s recall. Indeed, these are issues that the electorate will increasingly demand fiery and visionary leadership. And if those demands aren’t dealt with in a convincing and convincing manner, Governor Newsom will likely have some serious explaining to do in next year’s regular gubernatorial elections.

California faces a multitude of challenges. Currently, they appear to be focusing on housing, COVID policies, homelessness, K-12 education, taxes, and regulatory policies. These are deeply rooted and seemingly intractable problems. The public is smart enough to know that these problems will not be solved overnight. Despite this, the public has the right to demand and expect coherent and clearly articulated strategies that address these issues.

In housing, Governor Newsom’s call to build 500,000 units per year is ludicrous. California is fortunate to build 120,000 homes each year. Worst of all, the 500,000 unit target is based on a woefully flawed McKinsey study. The governor appears focused on driving the draconian zoning mandates of local jurisdictions down their throats. But there is no guarantee that these awkward zoning mandates will result in the construction of homes. And if built, will these new homes be priced low enough and designed to attract buyers? One need only look at the United States’ experience with the disastrous high-rise urban renewal projects of the 1950s to recognize the utter failure of the public sector to affect the supply of housing.

Rather than imposing higher residential zoning requirements on cities, a more informed and rational strategy is for the government to grease the wheels while reducing the high cost of construction and impact fees. It should also streamline regulatory approval. Then the government should step back and let the housing market do its job.

On the COVID front, if Newsom’s anti-recall ads are any indication, the governor is proud of his record in this area. The facts indicate otherwise. The cumulative death rate from COVID-19 from January 1, 2020 to August 10 this year in California is 165 per 100,000 people. This is only slightly lower than the US average of 173. And although Florida’s rate is 182 compared to California’s 165, this difference is entirely due to Florida’s higher population density ( higher density leads to higher COVID-19 case and death rates) and the fact that Florida’s percentage of the population over 65 is the highest in the country at 20.5 versus 14.3 percent in California, a percentage lower than the US average of 16.5.

Yet Florida elementary schools were open year round and their mandates targeted the most vulnerable, such as those in older cohorts. Its strategic use of warrants has resulted in less economic losses for the state. That’s part of why Florida’s unemployment rate is close to the US average of 5.1%, while California’s is the second highest in the country at 7.6%. In an article I published in the Journal of Bioeconomics, I presented data suggesting that California’s COVID-19 policies resulted in the loss of 500,000 jobs while Florida gained 70,000.

On the roaming front, it’s clear this isn’t just a California problem; it is national in scope. But our state is at its epicenter. Consider that with just 12% of the nation’s population, California is estimated to have half the homeless population. The immediate problem, however, is not that we have a homeless problem. It’s not even necessarily a funding issue, certainly not with $ 12 billion targeted for the homeless in the last state budget and $ 355 million per year provided for in Measure H funds for the homeless. next ten years.

The real problem is that the Governor has not articulated a coherent multi-year plan with coordinated strategies to deal with it. Before spending money on the problem and fueling an environment where corruption and corruption are rampant, a plan is needed to ensure that every public dollar is spent strategically.

To get started, check out Ron Simon’s â€œRSI Dream Community Planâ€ as an example of how entrepreneurial strengths can be harnessed to tackle this deeply rooted social problem.

Conclusion: We need visionary leadership to develop a plan based on treating every homeless person with dignity and respect.

Governor Newsom’s maskless dinner with friends at the exclusive French Laundry restaurant is well known. The fact that he did so while preaching the importance of avoiding gatherings smacked of hypocrisy. But this incident pales in comparison to the governor’s well-known opposition to charter schools and vouchers while sending his children to private schools. Advocating for policies that limit the capacity of parents who do not have access to charter schools or cannot afford private schools while ensuring that your children have this opportunity is, in my opinion, the crowning achievement. hypocrisy.

And what about that loss of half a million Californians to other states over the past two years? Our research in Chapman indicates that taxes and regulations are the main reasons for this theft. In a ranking of all state and local taxes, California ranks second after New Jersey. When it comes to regulation, the Mercatus Center at George Mason University ranks California number one.

In a recent study, we ranked states in order of taxation and regulation relative to each state’s net inward migration. The top ten states in terms of taxes recorded an average loss of 0.34% in net inward migration. This compares to an average gain of 0.45% for the ten states with the lowest taxes. Likewise, states with the highest regulatory burden lost an average of 0.07% in net migration, while those with the least regulation gained 0.43%.

It is clear that people vote with their feet when they are disappointed and frustrated with where they live. While the flight from California has increased sharply in recent years, net domestic migration in the state has been negative every year since 2011. So it’s not just a recent and short-lived phenomenon that will soon pass. It demands the governor’s attention.

I suggest that Governor Newsom appoint a bipartisan commissioner with legislative approval to recommend changes focused on improving California’s economic competitiveness. In 2009, Governor Schwarzenegger did something similar when he appointed Gerald Parsky to chair a committee tasked with proposing changes to the tax code. Unfortunately, however, the changes recommended by Parsky’s “Commission on the Economy of the 21st Century” were totally ignored by the legislature. This time around, if a similar commission is established, it should contain a clause that its recommended changes be passed – either up or down by the legislature – but at least implemented.

Voters gave Governor Newsom another chance. Hopefully he takes this opportunity to provide the kind of dynamic leadership that will help make California a place people want to live, not leave.

James L. Doti is President Emeritus and Professor of Economics at Chapman University.