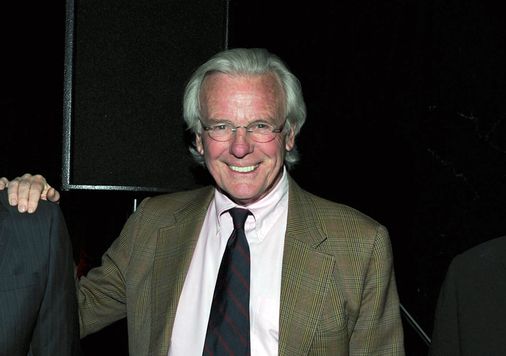 A Harvard University graduate who lamented his alma mater’s descent to “stardom”, Mr Aldrich was 86 when he died on March 8. His daughter Liberty told The New York Times that he died at his home in North Stonington, Connecticut of complications from Parkinson’s disease. disease.

Fast forwardA look at the news and events that shape the day, delivered a few times a week with a side of humor and a dash of attitude.

“Institutions can outlive their notoriety; they can hardly survive without it, not for 350 years anyway,” he wrote of Harvard in a 1986 Globe essay as the university celebrated its 350th anniversary.

“But when an institution becomes a celebrity, it feeds its notoriety on the capricious appetite of fashion,” he writes. “Reputation rarely survives this experience unchanged.”

He himself lived on the verge of fame, or at least in the realm of the well-known. His father, grandfather and great-grandfather were wealthy.

In Boston, where he worked for a time at the Globe, Mr Aldrich realized he risked being mistaken for his father, a prominent architect, if he identified himself by less than his full name. .

“Once in a while, when phoning someone for information on a story, I would introduce myself, dropping the ‘Jr.’ for the sake of brevity: “Hello, this is Nelson Aldrich at the Globe, and I…” Whereupon the man on the other end of the line said, “What? WHO? Nelson Aldrich? I thought you were an architect — what the hell are you doing at the Globe? And so I left,” he recalled in the 1992 essay.

Leaving Boston, he escaped the trappings of an easily recognizable name, but he could never leave behind his privileged upbringing.

In “Old Money: The Mythology of America’s Upper Class,” he was candid about those who grew up in wealthy households, including his own, and the paths they took later.

“Almost every kid at Old Riches has two kinds of driver stories to tell: one of fame and one of embarrassment,” he wrote.

Elsewhere, there was this confession: “Sometimes I feel like everything I’ve done in my life was a hobby.

“What Aldrich writes about, of course, is not money but class,” Globe critic Mark Feeney wrote in a 1988 review of “Old Money.”

“The great-grandson of a robber-baron U.S. senator, he is related to the Rockefellers and a product of St. Paul’s and Harvard,” Feeney said of Mr. Aldrich. “Yet he also taught in Harlem and spent several decades in journalism – not notable professions for their white shoe riding. In “Old Money”, he poses neither as an apologist nor as a muckraker. On the contrary, he is equal parts memoirist, sociologist, psychologist and, inevitably, moralist.

Born in Boston on April 11, 1935, Nelson Wilmarth Aldrich Jr. was the son of Nelson W. Aldrich, who, alongside his work as an architect, had served as president of the Institute of Contemporary Art and co-founded the Boston Arts Festival.

Mr. Aldrich’s paternal great-grandfather, U.S. Senator Nelson W. Aldrich of Rhode Island, had chaired the National Currency Commission and was considered the father of what became the Federal Reserve system.

His mother was Eleanor Tweed Aldrich, whose own mother was a countess by marriage to a Hungarian earl.

In a 1988 profile, People magazine said Mr Aldrich was 3 years old when his parents divorced. At the age of 8, he was sent to a boarding school to learn the “Silver Spoon Program”, he later called it.

Although he graduated from St. Paul’s School in Concord, NH, and Harvard College, Mr. Aldrich found himself without the sprawling fortune that seemed like a birthright to him.

“The moment Aldrich discovered he would inherit almost no money of his own – his father, an architect, lost a small fortune in business, and his mother, who married four times, left the much of his to housekeeper – he was so steeped in trust fund culture that he found himself uninterested in making a living,” People magazine reported.

In an oral history, he recalls that he traveled to Paris after graduating from Harvard in 1957 and worked as an editor at the literary journal The Paris Review, which had been founded a few years earlier. Mr Aldrich said he “got the best possible tutorial in magazine editing” from Robert B. Silvers, who went on to co-found the New York Review of Books.

Mr. Aldrich’s writing, editing and teaching work included reporting for the Globe; working as a public school teacher in the Harlem section of New York; as an editor at Harper’s Magazine; become editor of Civilization, the magazine of the Library of Congress; independent magazine articles; and a teacher at Long Island University and City College, City University of New York.

His other books included “Tommy Hitchcock: An American Hero” (1985), a biography of a famous polo player who died during World War II while testing a fighter plane.

“Aldrich’s access to Hitchcock’s wartime correspondence provides a rich portrait of those early days of solo combat by the seat of the flying pants in clamshell planes,” Sports Illustrated said of the book.

Mr. Aldrich also edited “George, Being George” (2008), which details the life of George Plimpton, the longtime editor of The Paris Review.

The book was a “sprawling and immensely entertaining oral history of the man who practically invented the genre,” Vanity Fair editor Graydon Carter wrote in a New York Times review.

According to the Times, Mr Aldrich’s survivors include his daughter, Liberty, from his marriage to Anna Lou Humes, which ended in divorce, and Mrs Humes’ daughter, Alexandra, whom he adopted.

Details of a memorial service were not immediately available.

“My daughter tells me that whenever she tells people she’s going to Harvard, they all say, ‘Ooooh, you must be so smart!’ Nobody ever told me that,” Mr. Aldrich wrote in his 1986 Globe essay.

“They thought I went to Harvard because I was born with such privileges, and they didn’t admire me for that,” he said. “I thought I was privileged, too, in a vague way. The thought weighed on me like a duty.

“Boston has always seemed to insist not only that I act responsibly, but that I’m responsible,” he said, adding, “There’s not a lot of wiggle room in cold-roasted Boston.”

Bryan Marquard can be reached at [email protected]