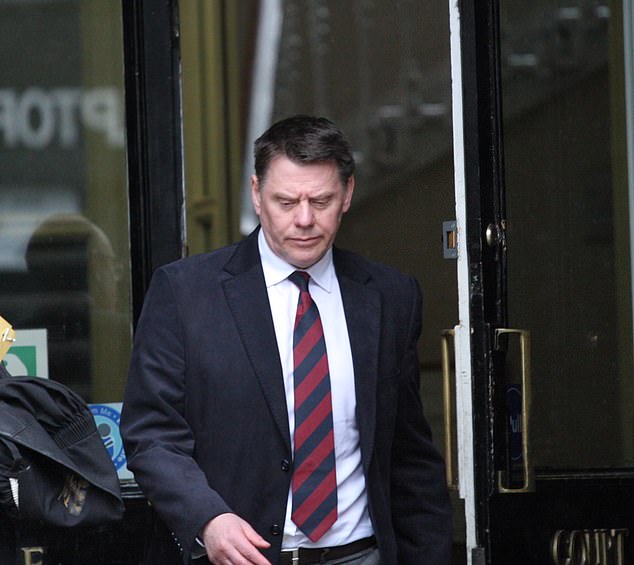 By Tim Bugler for the Daily Mail

A music teacher was jailed yesterday for assaulting teenage girls at a boarding school with chopsticks.

James Clark, 56, a former chief drummer and bagpipe instructor in the military, had been convicted of common assault by hitting or touching their buttocks.

He was also convicted of breach of trust through sexual activity with or directed against students and indecent communication with a girl.

Clark was sentenced to one year and nine months in prison after assaulting seven girls between the ages of 13 and 18. Falkirk Sheriff’s Court has heard that he used to touch girls on the buttocks at school in Perthshire.

A former pupil, now 23, said she felt ‘raped’ after being repeatedly punched in the back, often during the fitting of plaid skirts in the school store.

James Clark (pictured), 56, a former chief drummer and bagpipe instructor in the military, had been convicted of common assault by hitting or touching their buttocks

She said on a musical trip to Switzerland, Clark, pictured, slapped her on the butt “almost all the time.” Other ex-students said that when they challenged him to hit rock bottom with his hands, chopsticks or a rolled up copy of the ledger, the father of six Clark, known as “Drummie,” their would say, “I am your Father school. ‘

One victim said that when she was 16, Clark cornered her at a Christmas concert at school and told her, “We should both have kids together.”

He also reportedly hugged girls and walked into a student’s room while she was sleeping, sat on her bed and kissed her on the forehead.

Jurors have learned that Clark engaged in sexual activity with a 17-year-old in 2018, kissing her in a closet and performing a sexual act in the bagpipe shop.

Clark was sentenced to one year and nine months in prison after attacking seven girls, aged 13 to 18. Falkirk Sheriff Court (pictured) has learned he used to touch girls on the buttocks at school in Perthshire

The victim, now 20, said Clark had “abused” her in his car, in the group’s hut, “in the drying room … and at one point in the children’s closet.” She said he put his hand under her T-shirt and under her skirt.

Clark, from Edinburgh, had denied the charges. Sarah Livingstone, defending, said he had an “illicit affair” with the girl, but prosecutor Cheryl Clark said the victim had been treated.

Sheriff Alistair Brown, on sentencing, said: â€œSexual activity by a man in relation to a girl under the age of 18â€¦ in a position of trust is absolutely prohibited. “exceptions. It’s still a crime. Clark, now a gardener, showed no emotion when he was taken to the cells. He would never work with the children again.”