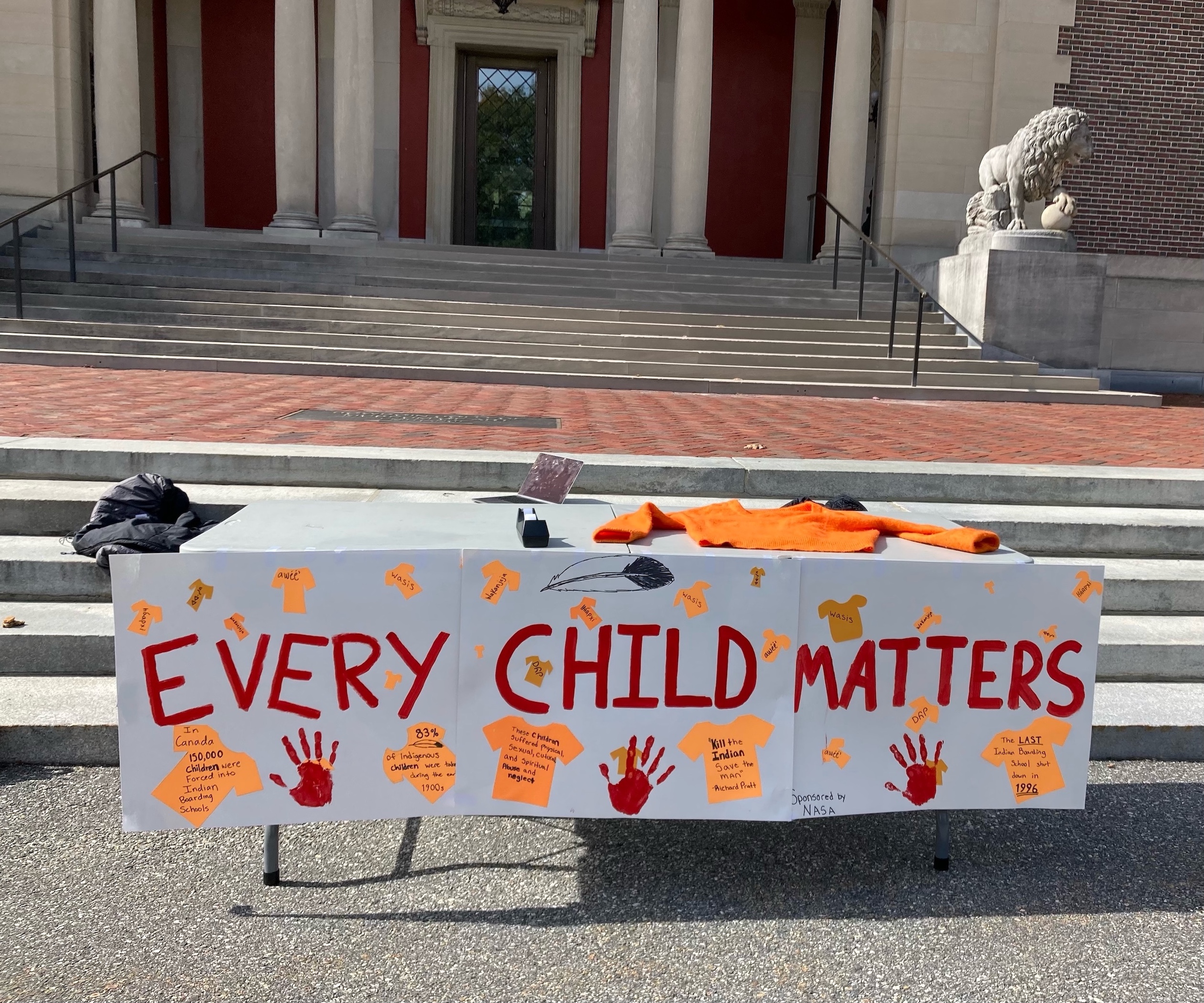 For National Indian Residential Schools Remembrance Day on Friday, September 30, the Native American Student Alliance (NASA) of Bowdoin installed a memorial on the steps of the Bowdoin College Museum of Art (BCMA) which was removed by the College.

NASA officer Amory Malin ’24 worked with fellow club members to organize an on-campus event recognizing this part of history, but encountered many obstacles in the process.

“We originally planned to hold a drop-off event at Smith Union where we would hand out orange shirts and talk about history to students, faculty and anyone who passed by, but that event was canceled. by student activities because of alumni. [Homecoming] Weekend. Former students were apparently going to take over all of Smith,” Malin said.

NASA wasn’t sure they could hold an event due to the cost of offsite accommodation, but their passion for the cause led them to seek solutions.

“We thought it would be just that and we would just post on Instagram and that would be the end of it, but when we told the other Indigenous students at Bowdoin what happened, they really, really wanted to have something, and so we decided to create a memorial for the children who did not come out of these boarding schools alive,” Malin said.

The NASA memorial consisted of posters featuring the word “child” written in all of NASA’s Indigenous languages ​​in remembrance of the young victims of residential schools, as well as facts about the recency, fatality, and abuse of the residential school system. NASA installed the posters on the steps of the BCMA on the night of September 28. However, it was only a matter of hours before the display was taken down.

“[The next morning] it was still there intact. It was around 8:30 a.m., and at nine o’clock it was gone. We didn’t know what happened,” Malin said.

Malin approached security and the student activities office and discovered that the College had removed the memorial. According to Malin, the College felt it pulled it because the posters weren’t explicitly attributed to NASA and because it didn’t want the content hanging on the BCMA.

NASA succeeded in having the memorial restored, but on the condition that it stick to it. Malin and other NASA members sat outside with the posters for hours, talking to passers-by about the impact of residential schools.

“I hadn’t had time to mentally prepare myself to have to relive this story again and again. It was quite a tough and long day,” Malin said.

Malin and Atcitty said this was just one of many instances where Indigenous students carried the burden of informing others.

“Indigenous students quite expect them to educate everyone around them rather than exist as students of their own volition in this school,” Malin said.

They not only said Indigenous students are expected to teach others about their history, but also that they lack the on-campus support systems they need to deal with the generational trauma of boarding schools and other systems. of oppression.

“It’s a lot of emotional work to revisit these wounds that we’ll never heal from and no native people will ever heal from,” Atcitty said.

To help deal with this history, Atcitty hopes the College will provide more support for Indigenous people on campus in the future.

Malin also hopes the College will extend its support and resources to Indigenous students.

“I feel like a lot of Indigenous issues on this campus are only addressed when it’s convenient,” Malin said. “I think that was demonstrated especially with the grad weekend; it wasn’t practical to prioritize Orange Shirt Day for Bowdoin, so it wasn’t a priority.

Join the club or face the consequences in AFTERSCOOL #4