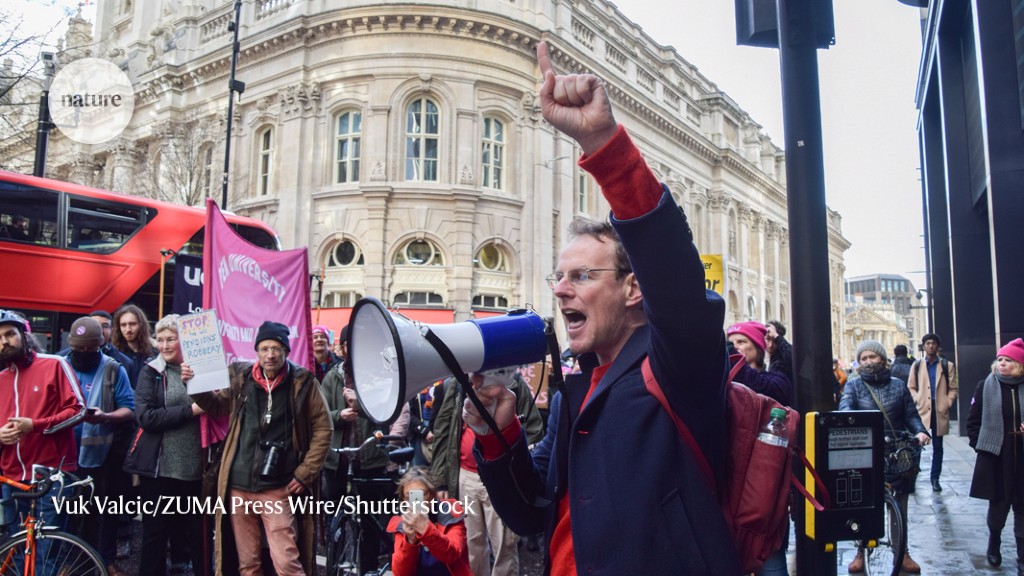 Thousands of academics walked out of universities across the UK this week to protest poor pay and conditions, as well as cuts to their future pensions.

Relations between employers and members of the Universities and Colleges Union (UCU) have been strained since 2018, when staff first went on strike over pensions. Academics’ concerns have since escalated to include what the union says are unmanageable workloads – exacerbated by the COVID-19 pandemic – as well as a reduction in long-term real wages, unequal wages and a lack of security. employment. The latest actions and planned new strikes are expected to affect lectures, lectures and lab work at dozens of institutions.

“We have the feeling that this is a sector that has reached the end of the road. The conditions people work in are unbearable and they feel exhausted,” says Felicity Callard, a geographer at the University of Glasgow.

More than 50,000 union members went on strike at 68 UK institutions on February 21-22, following industrial action at 44 institutions the previous week. Ten days of strikes are planned in total.

The London Universities and Colleges Employers Association, which represents institutions, says the impact of the strikes has been small. However, union members say striking staff had to temporarily abandon experiments, leaving some lab samples unusable, and missed funding application deadlines and conferences.

Lopa Leach, a vascular biologist at the University of Nottingham, says she missed at least one grant proposal deadline due to her strike. “Before the staff were angry, now they say, ‘I’m done with this’,” she adds. “We’re just at the end of our tether, really.”

The dispute is likely to escalate further. On February 22, the board that oversees the pension scheme at the heart of the debate – the Universities Superannuation Scheme (USS) – voted to ratify the proposed cuts and reject a UCU counter-proposal. This led the union to warn against further action, including a tagging boycott. The UCU estimates that under the USS plans, an average member of staff will see a 23% reduction in their pension benefits. However, USS employers’ calculations suggest that the reduction will be more modest, in the range of 10-18%.

Employers say the cuts are needed to shore up the scheme’s finances, while avoiding increases in staff and employer contributions of an additional £200m ($272m) a year. Such an increase “would have a significant and detrimental impact on the sector’s collective ability to deliver high-quality education and research,” a spokesperson for ASU employers said in a statement.

But the UCU says the assessment underlying the proposals – which was made in March 2020, when the stock market was at its lowest level in years – is no longer valid. Although the numbers remain volatile, new data shows the deficit has fallen from £14.1bn in March 2020 to £2.9bn in January 2022.

“There is a lot of anger, especially among junior staff who will be most affected,” says Martin Bayly, an international relations researcher at the London School of Economics and Political Science. “Overall, morale is pretty low.”

The pension dispute is just one of the concerns of staff, who the union says are facing burnout. In December 2020, 78% of respondents to a UCU survey reported an increased workload during the pandemic, which has seen teaching delivered both online and face-to-face. Staff risked their personal safety to teach in person during the pandemic, and many reported working weekends frequently, says UCU general secretary Jo Grady. “The fact that we love what we do makes us easily exploitable,” adds Leach.

Other contested issues relate to salaries and contracts. The union says pay rises for staff have not kept up with inflation, representing a reduction in real terms of 25.5% since 2009. And although it is narrowing, the gender pay gap in UK universities remains at around 15%, while the pay gap between black and white staff is 17% and the disability pay gap is 9%. Researchers say job insecurity has also taken its toll: 24% of full-time employees at UK universities have fixed-term rather than permanent contracts, according to the Higher Education Statistics Agency in Cheltenham . Such contracts force staff to overwork, strain their sanity and stifle their research creativity, Bayly says. “You’re not going to get into risky projects because they incur costs if they go wrong,” he says. “Precariousness is not only unfair and disproportionately affects women and minority employees, it is also harmful to the health of universities.”

Some research institutions and funders have expressed a desire to improve the work culture of UK researchers, through measures such as tackling harmful incentives and tackling bullying and harassment. “But I think a lot of us think that if you don’t address the conditions under which people are employed, it’s very difficult to make a difference in the culture of research,” Callard says.