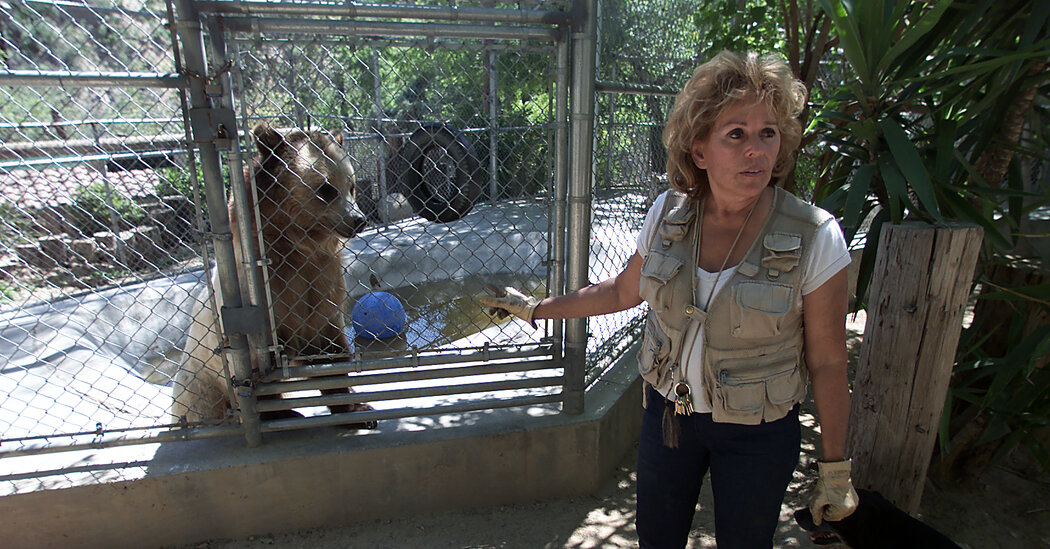 Martine Colette, the founder of Wildlife Waystation, an exotic animal sanctuary that operated for 43 years just outside the Los Angeles city limits, died Jan. 23 at a hospital in Lake Havasu, Arizona. She was 79 years old.

The cause was lung cancer, said Jerry Brown, his publicist and friend.

Waystation, which Ms. Colette established in 1976 in the Angeles National Forest, was one of the first such sanctuaries for abused, abandoned, orphaned or injured exotic animals. He would rehabilitate them and, if possible, return them to the wild.

After financial difficulties and staff unrest in recent years, Ms. Colette retired in 2019 and Waystation was closed. During the sanctuary’s existence, according to its website, it has rescued more than 77,000 creatures, including Siberian and Bengal tigers, lions, leopards, jaguars and camels, as well as native wildlife. , including foxes and various reptiles and birds.

Many of the animals were discards from the pet trade, traveling roadside attractions, or research labs; others had been brought from nature. Some came from nearby Hollywood, where they had been used on film and TV sets and brought home as pets, only to become a nuisance or danger to the owner.

Ms. Colette helped California develop many of its rules and regulations regarding exotic animals, including restrictions on their introduction from the wild and keeping them in homes. She was named an animal expert for the city of Los Angeles, and Waystation has become a model for similar shelters around the world.

Mrs. Colette had moved to Hollywood with her husband, the first of three; all marriages ended in divorce. (Survivor information was not immediately available.) She started a costume design business there and even appeared in a few movies and an episode of the TV series “Garrison’s Gorillas.” In 1965, she rescued her first animal, a mountain lion she had seen in a five-by-five-foot cage at an animal show.

Within a decade, the Los Angeles Times reported, she had amassed a house full of beasts and a yard full of feral cats. At that time, she sold her costume design business, moved to Little Tujunga Canyon, and opened Wildlife Waystation, which at 160 acres was larger than most municipal zoos.

The sanctuary gained an international reputation and needy animals were sent there from all over the world. Ms. Colette brought school children to Waystation and conducted outreach programs. In one of her most legendary adventures, she organized and led a caravan in 1995 to help rescue 27 big cats from a dilapidated game farm in Idaho.

But the shrine had longstanding problems, including overcrowding and unsanitary and unsafe conditions. Authorities banned him from taking any more animals in 2000 and closed him to the public; it reopened nine months later, after making $2 million in upgrades and reducing the animal population.

Despite Hollywood’s support, Waystation, which had an annual budget approaching $3 million, was struggling financially and managing the facility became increasingly difficult. Many staff resigned or were fired in the following years, and the sanctuary faced the constant threat of natural disasters; a major fire wreaked havoc in 2017, followed by massive flooding two years later.

Ms. Colette resigned as president and chief operating officer in May 2019 and moved to Arizona a few months later, the board of directors voted to permanently close the establishment.

The California Department of Fish and Wildlife stepped in to oversee the care and relocation of more than 470 animals, including lions, tigers, wolves, owls, alligators and chimpanzees.

Eighteen chimpanzees and two hybrid wolfdogs were awaiting placement, a department spokesperson said by email on Wednesday. Eleven of those chimpanzees will likely be sent to new homes later this year, he said, while funds are being raised to find homes for the remaining seven.

Martine Diane Colette was born on April 30, 1942 in Shanghai. The Waystation website said her father was a Belgian diplomat and she grew up in Nairobi, Kenya, where she attended boarding school. She spent much of her childhood traveling with her father through Africa.

“It was during those formative years of witnessing the horrors of trapping camps, hunting and animal exploitation that she recognized her true life calling,” the website says. .

Mrs. Colette had a special affection for chimpanzees, having rescued many of them from research laboratories, and she formed close ties with them; Waystation’s website said she calls them her “hairy kids.”

Among his last words, according to the website, were these: “Soon I will be walking with tigers.”