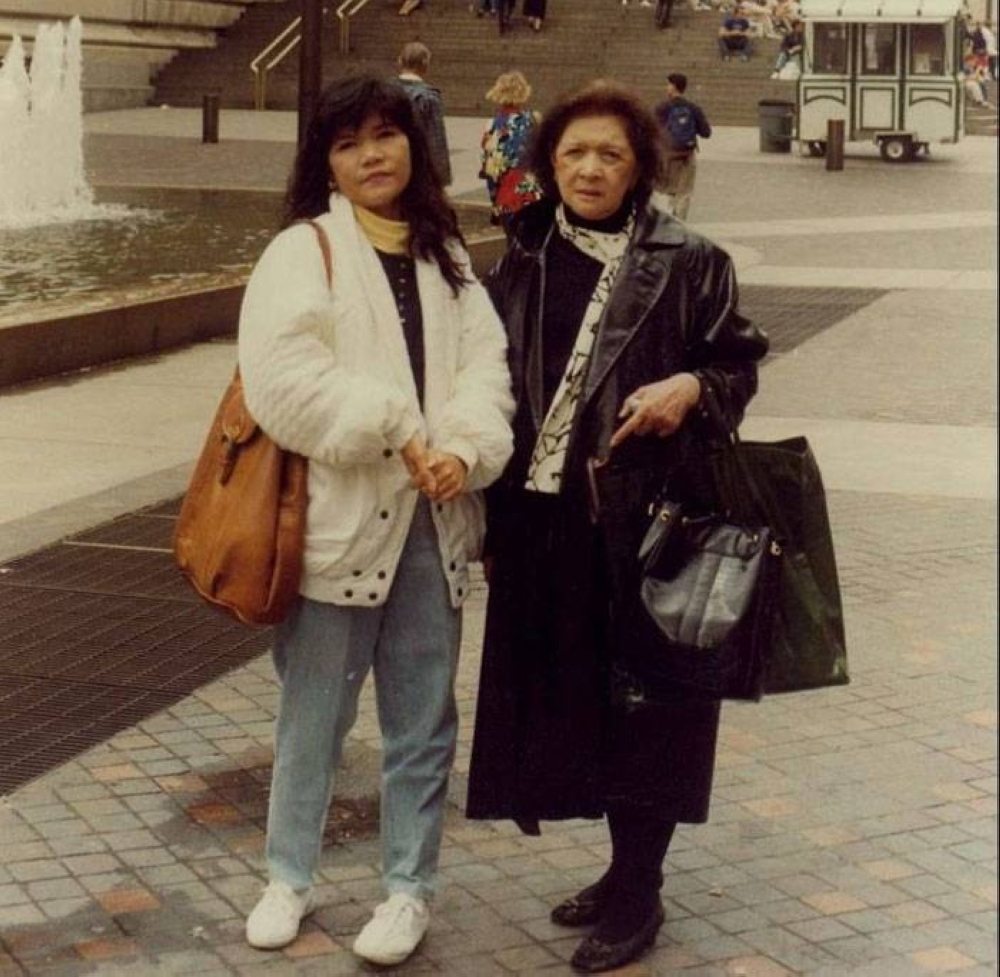 The author with his mother.

It is raining. I said “Okay” at a meeting at the Balesin Club in Makati, but it’s raining tonight. These days, I avoid going beyond three miles from my home to any of the villages in Quezon City. I am horrified by the EDSA and C-5 traffic that is building up at all times of the day. Imagine how even more horrible it gets when it starts to rain outside.

The rain is reminiscent of beautiful walks on the beach and “laughter in the rain”. The rain brings me back to an early childhood memory. A very sad one. It was raining when my father died. It was raining when we buried him in a Catholic cemetery. I watched the big drops fall from the sky onto the muddy ground forming small puddles of water. I heard my mom scream, “Don’t worry, Joe. I’ll take care of the kids,” as I watched a red earthworm squirm in the rain. God did not hear my prayer for my father to live longer. He allowed me to be fatherless so early. In the spring of my life, fall has come too soon.

I remember being twelve years old and being in first grade at a new school. Again. The school was half the size and worse, so old that my mother shouldn’t be joking when she told me that she had gone to this same institution, just like JosÃ© Rizal’s mother. I didn’t believe her, and I didn’t care. I only know that the building reeked of the old smell and the goosebumps feeling.

I remember going through a large wooden door that looked as hard as the nun who greeted my mother and me. The nun had platinum hair that protruded from her white and black headdress, a futile attempt to disguise her wrinkled and hostile forehead.

My mom left without a real goodbye, a hug, or “you’re gonna be okay” assurance. I was very scared and didn’t want to be there. Mom knew, so she left without warning. It was raining.

I remember the narrow hallway and the red and yellow tiles of Machuca leading up to what must have been my classroom.

I walked into the room and felt all eyes on me, the awkwardness of it all so palpable as I stood out so strangely in a powder blue brocade gown among a sea of â€‹â€‹girls in uniform gray plaid skirt and white blouse. â€œJust swallow me up, Earth. “

The school bell rang. I walked into the cafeteria on my own as a complete stranger to a strange new place. My eyes were warming, tears were flowing, like dark gray clouds threatening to turn into a heavy downpour. I courageously held them back. Cry in front of others? Oh no, not me. Maybe in the rain I would have. But the rain had stopped. Two round faces with kind smiles asked, “Are you crying?”

To which I replied, “No, I am not. I have a cold.” The two girls stayed with me and gave me a quick tour of what would literally be my second home for the next two years.

On the second floor was the science lab, where there was a jar with an aborted fetus floating in a dark yellow liquid. The door to the lab’s slash library was always open, giving everyone a direct view of the fetus in the jar, as a daily reminder or warning to us young women.

Up another flight of creaky stairs were the nuns’ private quarters that were inaccessible to us. There was the dining room with two long tables where we had study time after class and, of course, ate our rationed meals. The interns’ dormitory had eight to ten single beds arranged like a hospital ward. We shared a sanitized shared bathroom with four toilets, two toilets and two shower rooms. There was a smaller room that housed two very young boarders who no one would pick up on weekends or school holidays.

The entire third floor was guarded by two large wooden doors. One was just after the landing of the stairs and the other, just before the dining room and where the interns slept. These doors were closed with horizontal latches and padlocked at seven forty-five in the evening. With grilled windows in our rooms, we slept in a fire trap every night. The lights were out at eight in the evening. We were to be washed and laid to bed at that time. From time to time, a nun would come to check if everyone was asleep. She would do it by flashing a light on our faces.

I was an intern at this school in Intramuros where stories were told of ghost sightings of Japanese soldiers and nuns and exciting and daring escapes of notorious students – by nun standards – who encountered the boys from a nearby college. These stories were repeated often when we boarders gathered by the tree in the Small Campus after saying our evening prayers in the Little Chapel after dinner.

The life of an intern was as regimented as that of a cadet in military training. It was not a happy time for me. I missed my dad, and I missed home even though I wouldn’t find him there again. He died barely a year before my mother sent me to boarding school. I was angry with him for doing it for a very long time. Did she love me less than my older siblings who stayed home with her? I discovered the answer seventeen years later on a rainy morning.

It was late November in New York. My mom made my simple breakfast of fried eggs, sausage, and fried rice. She was an excellent cook, having obtained a degree in home economics from a university for women. Her father trained her to be a wonderful hostess for the big parties he loved to throw at the time. My mother was orphaned by a mother when she was three years old. My grandfather, who people called Don Julian, never remarried. He was very busy with his tobacco plantation in the north and his other businesses in pre-war Manila. My mother was in the care of aunts and nannies. It was a motherless girl who married an orphaned son from the south, who was my father.

These are bits of the one-sided conversation we had that morning. Mom spoke to me like a grown girl and not like her baby, but that didn’t interest me. I wanted to sort out something with her that I wasn’t aware I had fed for so long until she said something that she found funny. I yelled at him for the first time in my life. I gave free rein to my imprisoned feelings, then a word vomited: “Why do you always compare me to others? Why am I never good enough for you? Why do you always criticize me?

She answered candidly, “I didn’t know you were sensitive …” and continued to cook.

All those lonely nights in the college dorm, all the years I held back and pretended I was okay because it was the only way to survive the confusion and pain of facing the Adolescence deprived of parental care through death and migration, I liberated the mall. I wanted to go out with mom, but it was freezing rain outside. I wasn’t going to risk getting pneumonia because I already had my own young family waiting for me in Manila. So I stayed there. Livid and weeping.

“Why did you dump me as an intern when I needed to be home with you? I was so young! What kind of mother would do that!”

Mom froze, ladle in hand. She was stunned, then she looked down. Slowly she said, “I’m sorry. I’m sorry …” And then she cried. I made my mother cry. How terrible it was.

She continued, “I thought that was what was best for you. I thought you would be better taken care of there because we just lost Dad, and I had to run the businessâ€¦”

The freezing rain turned to ice, but my cold, steel-armored heart melted. That day, I understood. A mother always decides what she thinks is best for her child. From one mother’s heart to another, I understood. I forgave him although no forgiveness was needed. I should forgive myself for carrying all this resentment, yet I felt I had a right to be angry.

Mourning and loss had no names, so it was left unspoken and put on the back burner. Awkward conversation, so much pretension until you were like “Enough!” “

We had to face the collective sadness. And that’s what mom and I did on that rainy November morning in New York City.