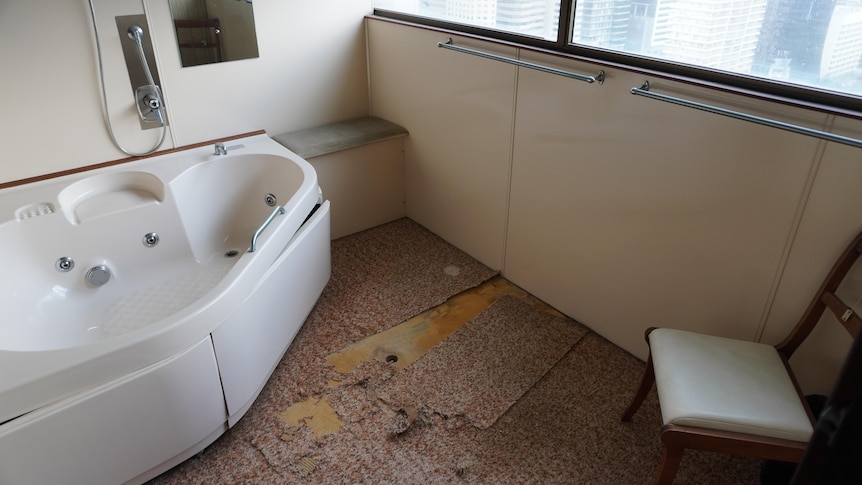 It was only in Queensland, under the presidency of Sir Joh Bjelke-Petersen in the late 1970s, that a spa bath could be built for his personal use in parliament.

The extension was built next to a security office with one-way glass windows facing the elevator so guards could be posted outside the former prime minister’s room.

Speaker of the Queensland Parliament and MP for Mulgrave Curtis Pitt said the halls gave insight into the thinking at the time of the controversial former prime minister.

“There had certainly been significant and real threats against the prime minister before the annex was built,” Mr Pitt said.

“I think it probably also highlighted a bit of paranoia in terms of security issues.

“There were certainly a lot of things that were planned when the annex was originally built in the 1970s that you just couldn’t do today.”

A symbol of a bygone era

These little-known rooms – which are symbolic of a bygone era – and others will soon be demolished as $41 million worth of renovations are underway to the Parliamentary Annex.

The $20 million concrete building was constructed in 1979 and saw Queensland become one of Australia’s only parliaments to provide on-site accommodation for regional members during sitting weeks, as well as offices, ministerial suites, lounges and reception areas.

Mr Pitt has been in the annex since childhood while his father, former MP for Mulgrave Warren Pitt, served under the Goss, Beattie and Bligh governments.

He said the work will be the largest to take place on the annex since it was built, with some parts remaining untouched for decades.

“It’s not really about cosmetic changes, it’s really about functionality and making sure we have a modern space for members to reside in,” he said.

“I’ve been there for five terms and I can tell you this place is definitely a home away from home.

“And obviously if we can make that as comfortable as possible for rural and regional MPs, that’s really important.”

Funding was set aside for the renovation in the latest state budget, with spending for the 2022-23 fiscal year spurred by security concerns.

Last year, areas of the parliamentary precinct were closed because concrete was falling from the building’s facade.

Burdekin MP Dale Last was inhaled by smoke and needed medical attention after the air conditioner in his bedroom caught fire a few years ago.

“The AC unit they removed from my bedroom was installed when it was built in the late 70s,” he said.

“Unfortunately it caught fire one night and without the smoke detector I might not be here today.

“It’s not a pleasant feeling to wake up in a room full of toxic black smoke.

“It’s absolutely long overdue – we have concrete falling off the sides of the building, we’ve had endless electrical and plumbing issues.”

Although politicians spending taxpayers’ money on themselves could be an unpopular move, Mr Pitt said the renovations were needed because of security concerns for MPs, staff and visitors.

“Frankly, when you have fire and safety issues like that, it’s not a safe place to work,” he said.

“It was to the point where we had to do something about it.

“A lot of things were considered, some of which included complete demolition and rebuilding, but ultimately the best value for money at the moment was renovation.

“So I think people will hopefully be very happy that it’s a good use of public funds.”

The renovations are expected to last at least a year, with MPs to be accommodated in surrounding hotels in the city.

They will be moving after Budget Week later this month so work can begin.

Many current MPs have fond memories of the Annex – and its history – from their childhood when they visited and stayed as members of the MPs’ family.

While the building is described by some as a home from home, Maroochydore MP Fiona Simpson said she preferred to think of it as “a very unusual boarding school, a necessary evil”.

“It was part of the time, what was happening [when the building was built] were they fixing the old parliament at the time,” she said.

“There was a big effort to make sure the current parliament didn’t collapse, the foundations had to be rebuilt, they had to redo the roof, which was leaking.

“They had West Indian termites in it, so they actually moved the whole parliament into the annex – it wasn’t just housing and offices.

“Parliament actually sat in the annex until they repaired and got our beautiful parliament back in working order.”

Ms Simpson is one of the oldest current members of Queensland’s Parliament and remembers camping in the bedroom of her father, former Sunshine Coast MP Gordon Simpson.

“The worst memory I have is when I was a college student and thought I could go home that night, only to find out that the house stayed until eight o’clock on next morning,” she said.

“And the bells [rang] all night, so in terms of comfort, it was good for parliamentarians but not good for visitors.”

Traeger MP Robbie Katter is the third generation in his family to be MPs and remembers coming to Brisbane from North Queensland when his father, Bob Katter, was a state deputy for nearly 20 years.

“Dad was elected in 1974 and I was born in 1977, so I’ve probably been in the annex since I was born and through my childhood,” Mr Katter said.

“I was elected in 2012 and hadn’t been there since dad left and was surprised to find that the room I was appointed to was pretty much exactly the same as 20 years older early when I was there when I was little.”

Mr Katter agreed that the annex needed updating and that the right decision had been made to renovate it.

“It really needs updating, you can tell the air conditioning is really old,” he said.

“I am more than happy with the accommodation as it is, but I think there are serious concerns about the health of the building.

“I think the sooner they can fix it the better, it’s probably a tough sell to the public, but if you calculate the cost over the next five or 10 years to put us in hotels it would be more profitable.”