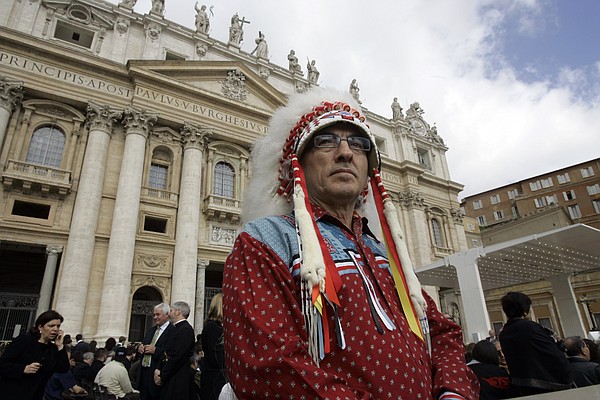 TORONTO — When a delegation from the Assembly of First Nations traveled to the Vatican in 2009 to meet with Pope Benedict XVI, the pontiff told them in a private meeting of his “personal anguish” over the abuse he had suffered. by Aboriginal children in church-run residential schools. schools they were forced to attend in Canada.

What was then called an expression of regret is no longer considered enough after the discovery last year in British Columbia of about 200 graves of unmarked and previously undocumented children in what was the largest residential school in Canada.

Indigenous leaders expect nothing less than a public apology from Pope Francis — with government officials all the way to Prime Minister Justin Trudeau lending their support — for the church’s role in residential school abuses. The pontiff is due to meet First Nations, Métis and Inuit survivors at the Vatican this week ahead of a visit to Canada that could take place later this year.

“We’re trying to give a voice to the voiceless by going there,” said Gary Gagnon, who will represent Métis people of mixed European and Indigenous ancestry on the delegation. Originally scheduled for December, the visit was postponed due to the covid-19 pandemic.

More than 150,000 Indigenous children were forced to attend state-funded Christian schools from the 19th century until the 1970s in an effort to isolate them from the influence of their homes and cultures and to Christianize them and assimilate them into mainstream society, which previous governments considered superior.

The government has admitted physical and sexual abuse is rampant, with students beaten for speaking their native language. This legacy of abuse and isolation has been cited by Indigenous leaders as a root cause of the epidemic rates of alcohol and drug addiction on reservations.

Nearly three quarters of the 130 boarding schools were run by Catholic missionary congregations.

Last May, the Tk’emlups te Secwepemc Nation announced the discovery of graves near Kamloops, British Columbia, found using ground-penetrating radar. The sites have yet to be excavated, but they have renewed a national reckoning as Indigenous groups across the country search for graves at other boarding schools.

“What really got things going was Kamloops,” said Phil Fontaine, who was national chief of the Assembly of First Nations in 2009. “It got so many people’s attention.”

Fontaine, 77, said he and his classmates suffered physical and sexual abuse as a child at Fort Alexander Indian Residential School in Manitoba, where he was forbidden to see his family except for two hours on Sundays , even if they lived nearby.

“Eventually, Canadians say, ‘Oh, that’s right. That’s what happened in residential schools,'” he added. “And I think that put a lot of pressure on the Catholic Church and the Vatican. Don’t forget that the Prime Minister himself asked Francis to apologize.”

A National Truth and Reconciliation Commission holds records of at least 51 children who died at the Kamloops school between 1915 and 1963.

Nationally, the commission identified about 3,200 confirmed deaths at residential schools in poor conditions, some due to tuberculosis, but noted that the cause of death was not recorded for nearly half of them. ‘between them.

FILE – People gather for a ceremony near the former Kamloops Indian Residential School to honor the more than 200 children whose remains were discovered buried near the facility, in Kamloops, British Columbia, Monday, May 31 2021. (Darryl Dyck/The Canadian Press via AP, File)

FILE – Assembly of First Nations Chief Phil Fontaine responds to the government’s apology for over a century of abuse and cultural loss involving residential schools, in the House of Commons on Parliament Hill in Ottawa , Ontario, Canada, June 11, 2008. From the 19th century until the 1970s, more than 150,000 First Nations children had to attend publicly funded Christian schools under a program to assimilate them into Canadian society. (Fred Chartrand/The Canadian Press via AP, File)

FILE – People gather around a makeshift memorial on a monument outside the former Kamloops Indian Residential School, honoring the 215 children whose remains were discovered buried near the facility, in Kamloops, B.C. on Friday, June 4, 2021. (Darryl Dyck/The Canadian Press via AP, File)

FILE – Canadian native Phil Fontaine, right, national chief of the Assembly of First Nations, and Archbishop James Weisgerber, president of the Canadian Conference of Catholic Bishops, hold a press conference after attending the general audience of Pope Benedict XVI in St. Peter’s Square at the Vatican, Wednesday, April 29, 2009. A group of Canadian indigenous representatives attended the pontiff’s general audience on Wednesday ahead of a private meeting where the pope expressed concern over recognized abuses and “deplorable conduct” of some church members in Canadian schools Canadians were forced to attend, in an effort to assimilate them into Canadian society. (AP Photo/Pier Paolo Cito, File)

FILE – People walk past the former Kamloops Indian Residential School after gathering to honor the 215 children whose remains were discovered buried near the facility, in Kamloops, British Columbia, Monday, May 31, 2021. (Darryl Dyck/The Canadian Press via AP, File)

FILE – A group of young people lead a drumming and singing band as the sun sets outside the former Kamloops Indian Residential School, to honor the 215 children whose remains were discovered buried near the facility, in Kamloops, B.C., Friday, June 4, 2021. (Darryl Dyck/The Canadian Press via AP, File)

FILE – Pope Benedict XVI greets the faithful during the weekly general audience in St. Peter’s Square at the Vatican, Wednesday, April 29, 2009. A group of native Canadians attended the pontiff’s general audience on Wednesday ahead of a meeting private where the pope expressed concern over the admitted abuses and “deplorable conduct” of some church members in the Canadian schools that Indigenous Canadians were forced to attend, in an effort to assimilate them into Canadian society. (AP Photo/Pier Paolo Cito, File)

FILE – Pope Francis waves from his studio window overlooking St. Peter’s Square in the Vatican to a crowd of worshipers and pilgrims gathered for the Sunday Angelus midday prayer, Sunday, June 6, 2021. The Pope Francis expressed his sadness at the discovery in Canada of the remains of 215 residents, but did not offer the apologies requested by the Canadian Prime Minister. Francis, in public remarks on Sunday, called on political and ecclesiastical authorities to work to shed light “on this sad affair” and promote healing. (AP Photo/Domenico Stinellis, File)