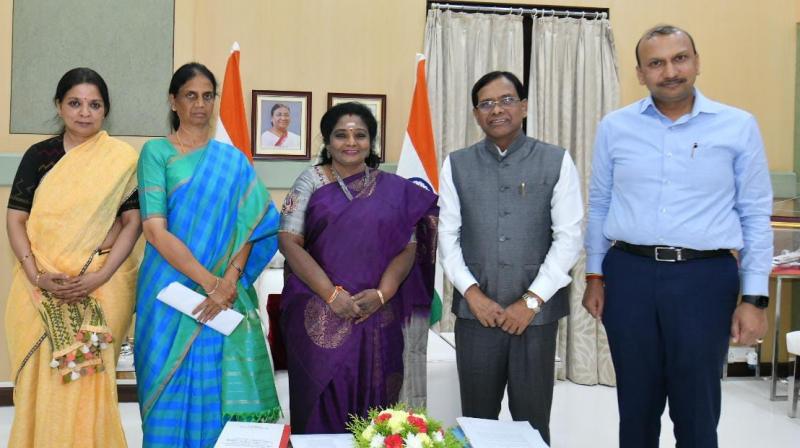 HYDERABAD: Education Minister Sabitha Indra Reddy met Governor Dr. Tamilisai Soundararajan a day after she was asked to check with Pragathi Bhavan or the CMO to see if she had received any letter from her regarding the project Telangana Universities Joint Recruitment Board Act. The Governor advised him to “give top priority to improving infrastructure at state universities, with an emphasis on improving hostel and laboratory facilities.”

The minister visited the Raj Bhavan with senior education department officials to address the governor’s concerns over the bill, a day after Dr Tamilisai seriously disputed claims that she was “sitting on the law Project”.

Dr Tamilisai had said she had written the minister a letter asking him to come to Raj Bhavan to discuss important issues related to the bill, but Sabitha Indra Reddy claimed she never received the letter.

According to a statement by Raj Bhavan, the governor conveyed his concerns to the minister over the proposed Joint Recruitment Board “in the wider interest of the public and state-owned aspirants”. The Governor raised a number of issues during the meeting, including the need for full transparency in the Board recruitment process, to undertake recruitment as early as possible in an impartial manner, to maintain recruitment based on eligibility, to strictly adhere to UGC standards for faculty recruitment, and to address the concerns of in-state aspirants.

The Governor also directed the Minister and officials to strengthen Chancellor Connects Alumni across all universities to encourage alumni participation in overall university development. Sabitha Indra Reddy was accompanied by Education Secretary Vakati Karuna, Chairman of Telangana State Council for Higher Education Prof. R. Limbadri and Commissioner of College and Technical Education Navin Mittal for the meeting at Raj Bhavan.