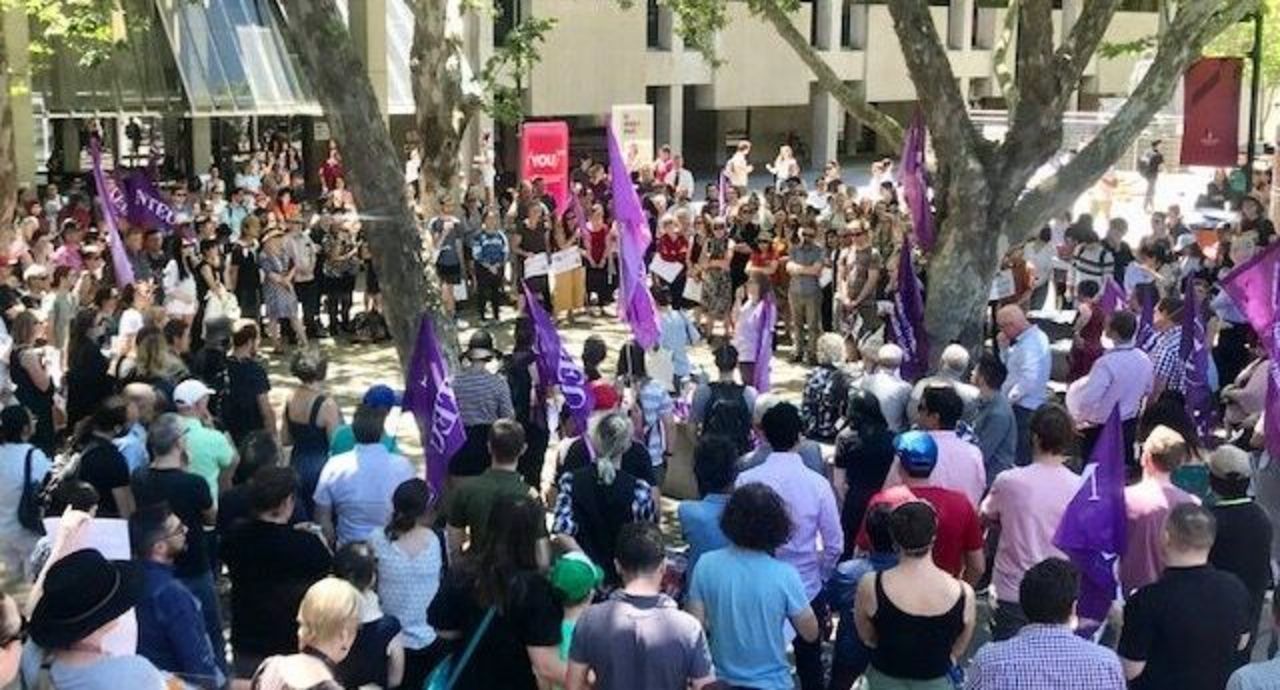 Students at universities across Australia are beginning to express their anger over for-profit plans to force students back into crowded lecture halls and classrooms amid massive COVID-19 infection and death . Universities plan to reopen this month, and early next, despite tens of thousands of infections and dozens of deaths being recorded each day.

Other universities are moving forward with a full on-campus return.

The campaign to force students and staff onto unsafe campuses continues with the support of unions, including student unions and the National Tertiary Education Union (NTEU), which covers university staff.

NTEU Deputy National Secretary Gabe Gooding confirmed the union’s cooperation for the return to campus, writing last November – as the daily number of COVID cases nationwide exceeded 1,000 and rising – in the union magazine, Attorney: “This period of transition out of lockdowns is when we need to seize the moment and make sure we are not ‘transitioning back’, but rather ‘transitioning forward’.”

Amid a massive backlash from staff and students to reopening plans, Monash University was hit last Friday with a Provisional Improvement Notice (PIN) issued by a Monash health and safety representative under state law. According to the NTEU, the PIN directs the university “to cease work when returning to on-site work and face-to-face teaching until meaningful consultation has been carried out”.

The union has taken only limited action in support of the PIN, lest widespread hostility among students and staff threatens to spiral out of its control.

Now the union is trying to divert that anger behind senseless appeals to management and half measures that won’t protect health and safety.

In a press release, the NTEU Monash branch lamented that the union was not sufficiently consulted during the planning. His “requests” included providing N95/KN94 masks and rapid antigen tests (RATs) for staff, not students. The union also called for “e-learning to remain a option for all students and staff. All of this is compatible with management’s desire to reopen.

Online comments to the NTEU Monash press release indicate the feelings of students and staff. A science student wrote: “In the first semester of 2021, domestic students were given the option to choose to take each course online or in person. It was when there were no cases. It’s ridiculous that we don’t have the opportunity to do this anymore, when covid is rampant in the state. I shouldn’t have to choose between going to college and seeing immunocompromised family or friends.

Another commenter wrote: “No one should be covid at work. It’s not sweet, and we’re not all going to get it. It is a serious multisystem disease. The University must prevent transmission at work.

A nursing student at Monash University said: ‘We asked for online learning to continue this semester – we got a similar response from the university saying they were improving ventilation so that’s OK to return to campus. Absolutely disgusted with this response as it feels like they are doing nothing and ignoring our safety despite a very clear request not to resume face to face teaching.

Nearly 200 Monash University nursing students have signed a powerful petition started by master’s nursing students opposing a return to in-person teaching. The petition states that students “are very concerned about current plans to return our course delivery to 100% on campus. The plan to return to campus was developed before the Omicron variant was detected internationally or in our community. We believe that continuing with this plan despite the new situation would cause unnecessary risks to our patients, ourselves, and disrupt our studies due to illness.

“We understand that Monash is currently following the requirements of the Victorian Government guidelines in its COVID safety plan. We do not believe these minimum requirements are sufficient to provide a safe or appropriate learning environment for us while doing hospital rotations with vulnerable populations.

“We do not plan to frequent campus for in-person learning which we consider unnecessary and which has proven to be unnecessary in the last year of online learning. While we look forward to joining the ranks of the nursing workforce that is in urgent need of replenishment at this time, we do not consider it reasonable that we are being asked to expose ourselves to unnecessary risk in the classroom to make it happen. .

The petition calls for “lectures and workshops to continue in online mode” and that “surgical masks provided in lab classes be replaced with N95 masks.”

The Monash Law Student Society reported on Facebook that the law school has confirmed classes will resume in person with no ability to watch lectures online.

Students in the Facebook group voiced their opposition to the decision. One wrote: “Now when Omicron is at its peak, they expect us to go straight back to the classrooms for record-breaking lessons with no ability to watch recordings. And you bet they’ll turn around and say “in-person learning was found to be more effective” like that’s not a huge rollback from what they’ve been saying for 2 years.

Another said: ‘I’m quite concerned about this… My grandmother shares her bedroom with me and I live in a household of 7 where neither of us have our own bedroom to isolate so I’ve been quite cautious due to the recent surge and stayed home most of the time over the holidays.

“I find that the change of 1.5[-hour] from online lectures and options to an unrecorded extended 3-hour in-person seminar to be the complete opposite of “safe” for us, the students and lecturers themselves. It’s really ironic that some of us have taken such drastic measures to protect ourselves and our families, just to be forced to attend classes to pass when before it was clear that classes in line had worked for us.

The student continued: “I know if I’m here it’s not by choice and all I’ll do is wonder when I can leave and when I’ll bring my new Covid friend home in my family.”

Another replied: “My grandmother has just finished her chemotherapy and I need care for her. She’s highly immunocompromised, and I’ve been so careful for the past two years. I feel like the university doesn’t care about people’s personal circumstances. I feel like I have to choose between my studies and the safety of my family.

At Western Sydney University (WSU), Vice-Chancellor Barney Glover sent a mass email on Friday in which he said the university had “been reassured in recent days by more positive news from NSW Health regarding the number of cases and hospitalizations”. Glover continued, “The University will resume face-to-face instruction on campus and the libraries will operate during normal hours.”

A WSU student commented in a Facebook group: “I asked two of the coordinators from two of my units if there were any online options and they both said the respective field dean said no. because the university tries to get as much on campus as possible – I think it’s kind of a shame for immunocompromised students that some units don’t even have the ability to zoom.

Students are force-fed the lie that returning to campus is done with their sanity and education in mind. That couldn’t be further from the truth.

Universities and schools across the country are being reopened under the murderous “let it rip” policies of governments around the world. For the ruling financial elite, reopening schools and universities to face-to-face learning is integral to ensuring that workers return to work to continue generating profits for the corporate elite. Unscientific claims that the Sars-Cov-2 virus will become “endemic” and the lie that young people are at minimal risk from COVID-19 have been used to justify this pro-corporate campaign.

In addition to the university unions, this campaign is supported by the student unions, which not only did not mobilize against the reopening, but in most cases did not even say anything about it.

Showing the way forward, students and teachers in France, the United States and Greece are protesting the deadly return to face-to-face teaching. Students must unite with university workers and form rank-and-file committees – completely separate from pro-corporate unions – to advance the fight against this deadly reopening and the demand for full campus closures and a transition to online learning. to protect students and staff.

The International Youth and Students for Social Equality (IYSSE) – the youth and student arm of the Socialist Equality Party – explains that this fight requires an international struggle of young people and the working class against the murderous capitalist response to the pandemic. The goal must be the elimination of COVID and the protection of health and life. Contact the IYSSE to get involved.

Join the fight to defend public education! No dangerous return to schools!