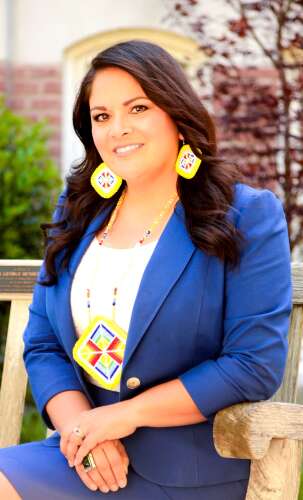 Shotton, who previously worked for the University of Oklahoma as chair of the Department of Educational Leadership and Policy Studies and director of Indigenous Education Initiatives, replaces LeManuel “Lee” Bitsóí, who left FLC for a new role at Brandeis University.

Shotton said she was inspired by the mentors she had while earning her undergraduate degree.

“Honestly, I was inspired when I was in college myself as an Aboriginal student. I had two mentors, who were Indigenous professors, who really sparked my passion for education and research,” she said.

Shotton is a citizen of the Wichita and Affiliated Tribes and is of Kiowa and Cheyenne descent.

She said she had both a curiosity and a desire to understand the experiences of Indigenous students at college. Shotton said that’s something she can bring to FLC, where nearly half of the student body is Native American.

She looks forward to participating in the work that FLC has done with reconciliation given the school’s history as a former Native American boarding school.

“It’s really essential work and work I look forward to taking on when I’m on campus.” she says. “More broadly, I’m really excited about Fort Lewis’s commitment to creating space for students from diverse backgrounds and thinking about the transformative capacity of higher education.”

Coming from another college, Shotton said his new position will require a lot of listening to better understand the specific issues facing FLC.

“I think Fort Lewis already has amazing staff, faculty and students, and I see my role as someone who can come in and work from a shared leadership position to really help think about the possibilities for Fort Lewis, from curriculum and broader inclusivity to reflection. about the specific communities they serve,” she said.

Shared leadership is a concept that Shotton believes in. It is an approach of increasing the number of people involved in a decision-making process regarding academics and the organization of a school.

Many factors made FLC an attractive choice for Shotton. Having worked her entire career in the field of Aboriginal education, she finds the history of the college interesting and knows that history.

She salutes FLC’s dedication to growing around diversity, equity and inclusion. Shotton is impressed with the intentional effort the school has made to partner with the Four Corners Tribal Nations.

“The stated and demonstrated commitment to DEI appeals to me,” she said. “There is tremendous leadership at Fort Lewis and more importantly there are amazing students and I am so excited to work with the students who make up this great institution.”

Teacher, 14 among hundreds of Americans hit by gunfire over the weekend