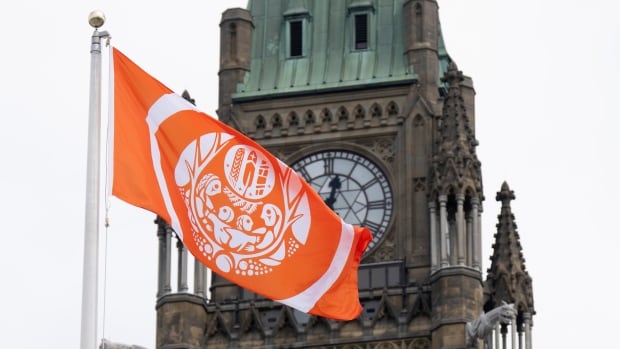 “Today, we raise the Survivor flag high over these colonial buildings, where lawmakers are now listening to our truths and seeking to work together toward reconciliation,” Durocher said.

In his remarks, Scott asked elected officials to take a moment during their work to pause when they see the flag.

“An Expression of Remembrance”

Trudeau called residential schools a “shameful” part of Canadian history and said the survivors’ flag would serve as a way for Canadians to remember what happened at government-funded, government-run institutions. church for more than a century.

“This flag is an expression of remembrance,” Trudeau said.

“It is meant to honor all survivors and all lives across generations who have been, are and will continue to be impacted by the residential school system.”

The flag was designed in consultation and collaboration with survivors, with every element of the design having been approved by the consulted group.

The elements include a depiction of a family with seeds underneath meant to represent the spirits of children who never returned home.

Eugene Arcand, a Cree survivor who attended St. Michael’s Indian Residential School in Duck Lake, Saskatchewan, spoke of the shared responsibility of Canadians in pursuing reconciliation efforts and urged people to get to know the survivors.

“There are not many of us left,” Arcand said.

“Take the opportunity to meet us. Know who we are.”

Last year, ground-penetrating radar located what are believed to be hundreds of unmarked graves on the grounds of former boarding schools, sparking efforts to remember survivors.

The flag will remain flown on Parliament Hill until 2024, when a decision will be made on its permanent residence.

Support is available to anyone affected by their residential school experience or recent reports.

A National Indian Residential Schools Crisis Line has been established to provide support to former students and those affected. People can access emotional and crisis referral services by calling the 24-hour national crisis hotline: 1-866-925-4419.

Mental health counseling and crisis support is also available 24/7 through the Hope for Wellness Helpline at 1-855-242-3310 or by online chat at www.hopeforwellness.ca.

Cisco: The Role of Universities in Accelerating the Transition to Net Zero