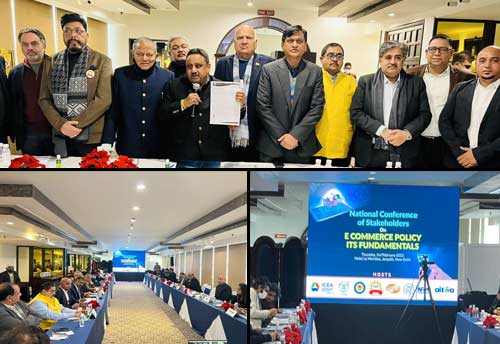 New Delhi, 4 Feb. (KNN) In order to protect the interests of small traders against e-commerce players, the Confederation of All Indian Traders (CAIT) has issued a 14-point request to the DPIIT for the formulation of an e-commerce policy. This decision comes after a huge push given by the Minister of Finance to digitization.

Called the Delhi Declaration, the document contains 14 e-commerce related points emphasizing the creation of an independent e-commerce regulator to protect the interests of small traders, startups and MSMEs.

A unanimous resolution was passed at the national meeting organized by CAIT with various other stakeholders on Thursday.

Praveen Khandelwal, Secretary General of CAIT, said that at a time when the priority of digitization of large-scale infrastructure is in the Union budget, e-commerce is set to grow across the country and it is therefore necessary that a clear policy should be declared for e-commerce activities.

CAIT also suggested that the marketplace platform entity does not, directly or indirectly, control the seller’s inventory.

Additionally, it required that the Marketplace not act as a wholesale seller for its registered sellers, and that e-commerce businesses in the Marketplace must not own trademarks or create their private labels.

He made several other recommendations covering aspects such as sellers, consumers, service providers, strong KYC, and due diligence of sellers before onboarding so they don’t end up selling illegal products.

The conclave also decided to form a special working group made up of organizations working in different verticals.

Although they were invited to this conference, other e-commerce companies including Amazon, Flipkart opted out, while senior executives from ITC, Hindustan Lever, Coca-Cola, Amway, Udaan , Urban Ladder, Big Basket, Reliance, etc. attended the conference and spoke on the trade issue.

All the speakers at the conference said that instead of competition in e-commerce, it is necessary to complement each other, while strict rules should be established in e-commerce policy so that no one can break the rules. and the laws. (KNN Office)

Crypto, NFT, Web3: People Hate the Future of the Internet