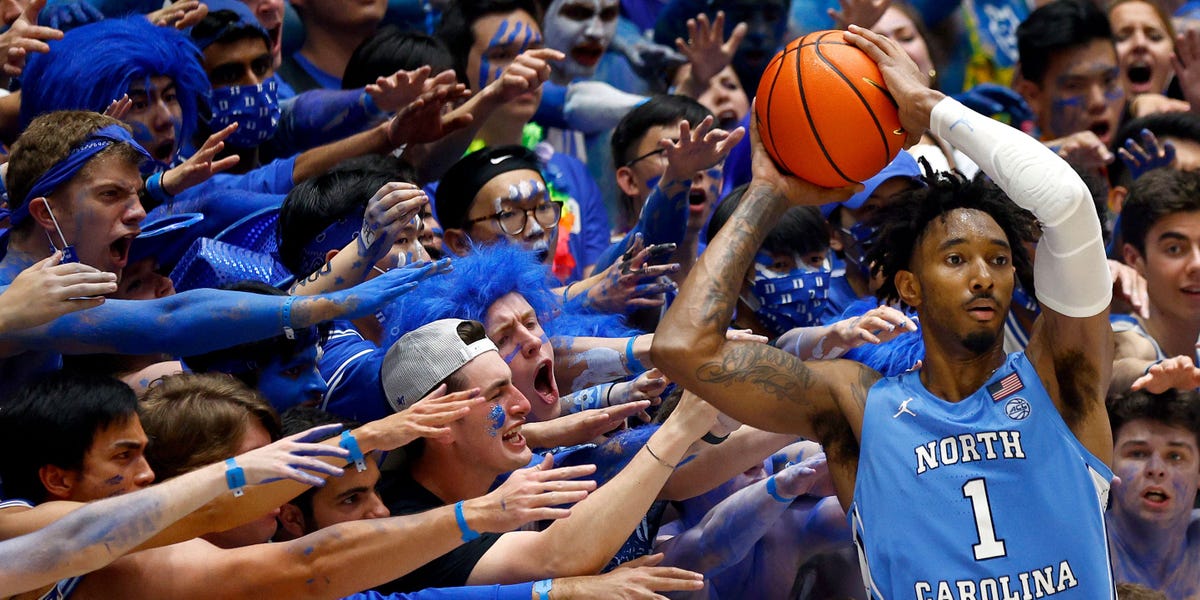 Duke and UNC are separated by 8 miles. Some fans are caught in the middle.

Lisa Ruth knew she hated Duke before she knew she was going to North Carolina.

“We joke that the hatred of Duke seems to just be pumped into the Chapel Hill water system,” Ruth told Insider.

Ruth’s family moved to Chapel Hill while she was still in high school. While she would earn a bachelor’s degree in philosophy and American studies from UNC and then a master’s degree in library science, she says her hatred of the Blue Devils existed long before her love of the Tar Heels.

“Even though I wasn’t 100% sure I was going to Carolina, I knew I hated Duke,” she repeats.

And yet, love finds a way.

“The first day of class, I thought he was cute,” Ruth says of the first time she met her future husband. “Then you go around and everyone shows up, and he said he went to see Duke. I was like, ‘Oh, forget it. There’s no way. “”

A group project finally brought them together, and now Ruth and her husband, Jim, are one of the couples who stand in the midst of the biggest rivalry in college sports.

Duke and North Carolina basketball teams have met 256 times in a rivalry that spans a literal century. But this weekend, they will meet for the very first time in the NCAA Tournament. It’s a match straight out of a dream for those watching from afar. But for those with ties to both schools, it’s closer to a nightmare.

“We are both so terrified that the tensions are very high,” Ruth said. “One of the things that makes the rivalry so beautiful is that there is no real answer to who is the best. We are so much equal. But it’s bragging rights forever .

“It has the potential to shut everything down,” she said. “We are terrified.”

Despite her best efforts, Ruth is now the last Carolina fan in her family, with her two children eventually finding a love for Duke basketball in them.

Ruth’s daughter, who initially stood up to her mother and the Tar Heels, also recently switched sides after attending a few games at Duke’s famous Cameron Indoor Stadium.

“She’s gone to the dark side,” Ruth told Insider. “She’s trying to straddle the line. You ask her, she’s like, ‘Well, that’s complicated.’ No, it’s not complicated. There is darkness and there is light.”

With less than 10 miles separating the two basketball powerhouses, the Ruths aren’t the only ones caught in the middle.

Lisa’s brother-in-law, Aaron Kirschenfeld, graduated from Duke with a degree in history in 2007.

When we talk on the phone, he corrects my language – I had referred to the upcoming “UNC-Duke game”. “It’s done duke-Caroline,” Kirschenfeld kindly reminded me.

Kirschenfeld, of course, has a built-in bias; he was actually one of the Duke Blue Devils for three years. But he went to North Carolina for grad school, and while he says he’s still a Duke fan through and through, he also works at UNC.

“I teach a law course,” Kirschenfeld told Insider. “Usually on the first day of class I tell everyone that I support Duke. It’s law school, so some of them are from Duke undergrad. But I let them all hang out right from the start. departure.

“I don’t usually share the fact that I’m the mascot. But I don’t deny it.”

Kirschenfeld attended Duke-Carolina games as a mascot and a fan. According to him, they are unlike anything else in the sport.

“The floor vibrates, to the point that you wonder how they’re properly dribbling the basketball,” Kirschenfeld said. “I know it’s cliché to say you throw away all the records, but the energy in the building is so weird.

“It’s just…it’s like it exists outside of time,” Kirschenfeld said. “I have been in

for a certain time. I guess the feeling’s no different – where it’s like, Oh, I guess sports do that. It is able to take over your normal, everyday awareness, and you can kind of forget about it for a while.

“It always feels like there’s no air in the room or something. And it’s so loud.”

Kirschenfeld is a die-hard Duke fan and can elaborate on the game problem North Carolina presents to the Blue Devils in their upcoming Final Four showdown. But while his heart is clearly with Duke, he recognizes Carolina as a worthy rival.

“There’s always something for every team to celebrate at some point,” Kirschenfeld said. “The reality is you live with these people, you work with these people. I try not to object because they’ll have a good time later. I don’t see the point of being petty about this. topic.”

When asked where he would be watching the big game, Kirschenfeld offered a hesitant laugh.

Whether or not he watches the game as it happens, Kirschenfeld will follow the score via group chat with former Duke pals.

“I don’t deny that’s happening,” Kirschenfeld said of her potential decision to stay away from television. “I wish I was a stronger person and could say, ‘Yeah, I’m really excited to watch the game. Whatever happens, happens. I’m just not… It’s a lot of stress.”

But not everyone caught in the middle of the rivalry suffers from the same stressors. Mackenzie Warren is a sophomore at Duke – and also a second at UNC. You see, she is a member of the Robertson Scholars program.

“Really, I really love it,” Warren told Insider of her time in Chapel Hill. “It’s kind of sad to think about how the semester is already coming to an end.”

Warren assured me that the program did not make him feel like he was behind enemy lines, although some students were less outspoken than others in disclosing their blue devil status.

Warren said she’s not a huge basketball fan, but did follow the action ahead of this weekend’s game. Although she has an affinity for both schools, she will encourage Duke to advance to the national championship game.

Conveniently, the Robertson Scholars are hosting a Supervision Party for students from both schools on Saturday as part of a weekend that will be dedicated to welcoming the class of 2026 Robertson Scholars into the program. While the watch party will take place on the Duke campus, in the event of a victory in North Carolina, there will be buses taking those wishing to join the party eight miles away.

“If UNC wins, I’ll definitely jump on that bus,” Warren said. “I don’t know how the other Robertsons are going to feel. But I think mostly us Duke students who are on Campus Switch right now… there’s an affinity that I have at least for UNC.

“If Duke wins, I’ll definitely stick around for the after-watch party madness.”

Warren was the only person I spoke with for this story who didn’t express “fear” or “stress” regarding the upcoming game, instead beaming positivity over the phone. There was empathy for those on both sides of the battle lines that had been drawn.

Warren will clearly back the winner of Saturday’s game to win the national championship, but the support from both schools doesn’t hold true for everyone whose fandom is divided.

Lisa Ruth is grateful that her husband and son are going to watch the Final Four live in New Orleans.

“I keep telling everyone, it’s a good thing that several states separate us,” Ruth said. “Because I don’t think we could be in the same house.”

If Duke won, Ruth said her allegiance would not change. While her husband and son would stay in New Orleans to watch the national championship, would she hold her nose and her roots for the Blue Devils so her family would come home happy? Or hope that they are crushed in the final?

“There is no tipping.”