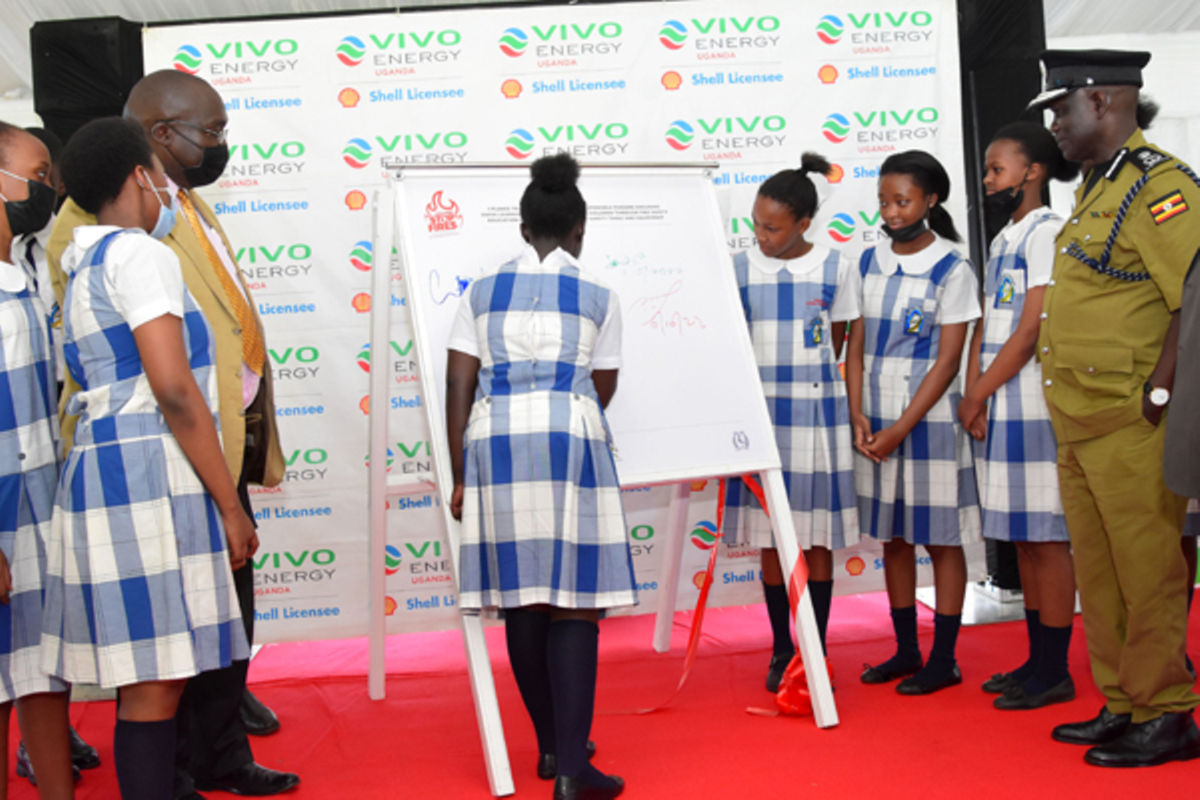 “Schools are meant to be safe learning spaces for our school children,” Dr Joyce Moriku Kaducu, Minister of State for Primary Education, said recently ahead of the launch of a fire safety education campaign. for schools across the country.

“It is truly disheartening to see that the high rates of school fires that go unchecked are due to negligence and a lack of preventative measures such as the installation of recommended firefighting equipment.”

Dubbed Cool Kids Stop Fires, the campaign led by Vivo Energy will be implemented in partnership with the Uganda Police Directorate of Fire Prevention and Rescue Services and the Ministry of Education and Sports.

The initiative, launched at Greenhill Academy last month, is being implemented as a measure to reduce incidents of school fires and the resulting injuries, deaths and property loss.

During the campaign launch, it was revealed that most school fires are intentionally set by students to settle personal scores.

In addition, the report “Security and Safety Guidelines to Educational Institutions of Learning”, signed by Inspector General of Police Martin Okoth Ochola, revealed that between January 5, 2022 and June 27, 2022, a total of 40 fires were recorded in 39 schools and institutions in Uganda.

“Investigations have so far established that of the 40 incidents, 17 were committed intentionally (deliberately); four were the result of negligence, four accidental, i.e. electrical fire circuits. The causes of the 15 fires have not been established,” said AIGP Mugisa, who represented Mr Ochola.

Other surveys have also established that the most affected schools are boarding schools and private properties, with the exception of Teso College, Kabalega SSS, Lubiri SSS and Iganga SSS.

The fires mostly occurred in dormitories when students were outdoors, with the exception of Kibedi Junior School’s New Crest and St. Mary’s Prepartix Girls SS in Entebbe.

“These rampant school fires pose risks to the lives of children, their property, the properties of the affected schools and have a disruptive effect on the economy of our country. There is an urgent need for mass awareness, firefighting training and improved fire safety measures by schools through the installation of smoke detectors and alarms,” noted the AIGP Mugisa.

Deputy Commissioner for Private Schools and Higher Education Institutes George Mutekanga, who received the report on behalf of the Ministry of Education and Sports, said most of the fires are caused by students in reaction to disciplinary measures caused by the school administration or as a result of disputes between students.

He quickly accused some school staff of having bad intentions.

“Some of these fires are started by students at one school copying what other students are doing at other schools,” he said.

“Sometimes the school administration also fails to implement the basic requirements and minimum standards of the Ministry of Education.”

But just like the police, Johan Grobbelaar, managing director of Vivo Energy Uganda, says the fires can be stopped through campaigning.

“We would like to use our vast expertise and knowledge to help the nation fight school fires which have increased and pose a significant threat to the lives of our children and school property,” Mr Grobbelaar said.

“Through this campaign, we will provide fire safety education to students and educational institution stakeholders and train them in the prevention, detection and management of fires in schools to avoid losses. life and property,” he said.

Government interventions to curb the increase in fires include the institution of a committee by the Department of Public Works and Transportation to review educational, commercial and residential facilities and assess compliance with fire prevention standards.

The committee includes representatives from the Uganda Police Force, Ministry of Public Works, Ministry of Education and Sports, Ministry of Gender, Labor and Social Development, Ministry of Justice and Constitutional Affairs and Landlords of private schools.

The police are urging educational institutions to “activate safety and security committees for staff and learners” as well as to “implement fire and security measures such as portable fire extinguishers”.

“The main role of the committees is to develop and oversee the implementation of safety and security policy for the respective institutions,” Mugisa said.

He added that there should be controlled access to the premises as well as ensure security inside the premises.

Another recommendation is that schools ensure that institutional structures comply with the provisions of existing legislation for design, construction, maintenance and change of use.

“Provide separate accommodation for each sex and age group; three to four square meters of floor space per student,” the report states.

Learners should bring the culture of school safety home.

“When you see your brother tampering with a cooker and tell him it could lead to an accident, you will have done a good job of safety. Keep it up and pass it on to your colleagues. The more security conscious we are, the safer we stay,” he said.

According to Dr. Kaducu, following the directive issued on the management of fire safety in schools, the ministry must intensify the inspection of this aspect to ensure compliance in educational institutions.

“I encourage school leaders to prioritize the safety of the children in their care by implementing these preventative measures,” Dr Kaducu said.

According to the Uganda Police, urgent issues that need to be addressed include increased security in schools with guarded dormitories when students go on vacation, schools installing fire alarms and cameras, fire awareness as well as exercises and regular inspection of schools for compliance. to safety standards.

Do not permit/permit the burning of trash or waste near dormitories, stores, classrooms, etc. Any burning of waste must be carried out in an incinerator controlled by specially designed workers.

Do not allow rudimentary but dangerous heat-producing electrical appliances and objects such as springs known as “suicide” into dormitories or any other premises.

Do not undertake hot electrical welding or cutting of metals, repair work in a dormitory or laboratory, store or office occupied with combustible materials, first remove combustible materials before worlds of welding or electrical cutting are undertaken. This work must be supervised before, during and after must have an emergency fire extinguisher before, during and after the work.

Every Main Character In The Teen Series, Ranked