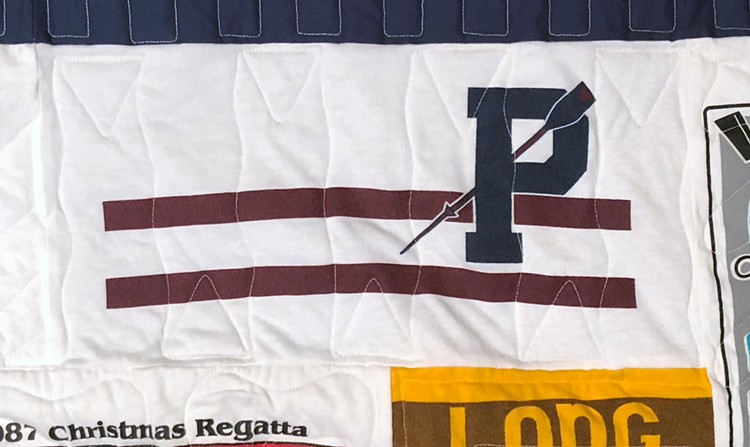 Book excerpt: Life is a metaphor for rowing, by Peter Mallory; Chapter 2: One Thousand and Five – Rowing Stories, Reports and Interviews

From the duvet of my life…

April 18, 1964. The Penn Lightweight Crew arrived from Philadelphia, Pennsylvania by bus. I’m an 18-year-old freshman sporting a shaved head of promise of brotherhood, and this Saturday morning I put on the revered University of Pennsylvania running jersey for the very first time. White t-shirt with two horizontal red stripes across my chest and a blue “P” with an oar above my heart, a heart that I can tell you is bursting with pride right now.

As the boats line up along the western shore of Lake Cayuga, the old and musty Cornell boathouse is far behind us until we enter the southern end of the lake, with the venerable Cornell campus which stands above. I look around and look past my teammates and past the ball of our boat. I can’t make out the finish line a short mile and five-sixteenths away.

By the way, that’s how far they row at the Henley Royal Regatta on the River Thames in England. . . or so I was told. The most famous regatta in the world. Coxswains wear coats and ties, can you believe it? Women in their best dresses and hats, men in blazers and boaters. Every rower on earth wants to row at Henley at least once in their life, and not least me. If I do the Penn Lightweight Varsity in a year or two, and if we win the Eastern Sprints, then we can go to Henley Royal Regatta. Oh my! I can not wait !

“One mile and five”. The legendary Henley distance. Soon I will be his master on Cayuga Lake!

Our opponents are sitting quietly next to us, and there is not a breath of wind. The lake is like a mirror, deadly still in this early spring, the buds are just beginning to form on the trees. I can hear my heart beating.

Earlier this morning, back at the boathouse, I ran into Chris Williams, a classmate of mine at boarding school, now a Cornelian, and now stroking their First First year light boat.

wow! I am impressed!

I never got to know Chris particularly well during our days at Kent School, a church-affiliated boarding school in a rural, hilly setting perched on the banks of the scenic Housatonic River in northwest Connecticut, where my father had gone in his time and where the rowers were the Greek gods of Mount Olympus, the captain of the first boat called simply “Zeus”.

I never ended up in Kent. I left for Shortridge in the middle of my fifth year (11th year), too soon to have seen Chris rise to 4th place in the Kent Second Boat, undefeated New England champions. In my absence, Chris became a deity under the tutelage of Coach Tote Walker, the ageless embodiment of what rowing stood for in all of our minds.

Now Tote was already a venerable institution in Kent when he befriended my father in the 1930s, and Tote was still there when I was there in the 1960s. Go ahead. Do the math. T. Dixon Walker was considerably older than the stained glass windows in the Kent School Chapel.

Tote went to heaven a few years ago. Grown men cried all over the world.

I was never coached by Tote Walker. I left Kent too soon, but even if I had stayed until the end, I was a peanut, less than five feet tall, well under 100 pounds and far too shy to even imagine being able to wear blue Sacred and Historic and Gray of Kent School Boat Club.

So today you can imagine how surprised Chris is to see me rowing. The last time he had seen me in a boat, I was not a rower but very small coxswain in the intramural program at Kent. . . and a surprisingly unsuccessful one at that!

In fact, it must have surprised Chris to see me again in any context because to him and my other Kent classmates, I literally fell off the face of the earth. It had been almost two and a half years since I had last sat in a classroom, the dining hall or a racing hull in Kent. And here’s how it happened: On a whim, on Thanksgiving night, November 23, 1961, at the age of 16, my roommate and I ran away from Kent School. It was quite a national scandal, eventually raising alarm in 31 states, and I only wish I could weigh as much as the Herald Tribune said! Ironically perhaps, the Trib has long since ceased operations.