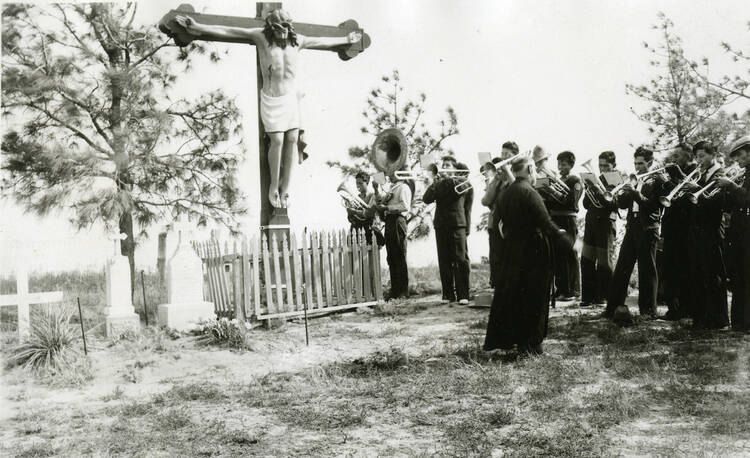 Atonement for sins against Indigenous peoples begins by facing the past. India’s Red Cloud School is leading the way.

When the Holy Rosary Mission was founded on the Pine Ridge Indian Reservation in South Dakota in 1888, many Jesuits and Franciscan Sisters who created the mission learned the Lakota language. The missionaries believed that this method of inculturation would be effective pastorally.

Ironically, at the residential school they founded at Holy Rosary Mission, they banned native Lakota speakers from speaking their own language, in accordance with federal government policy at the time. In doing so, the men and women religious have become complicit in the destruction of the Lakota culture.

We, a former Lakota Catholic student in Red Cloud and a White Jesuit in training, are working directly on the Red Cloud Indian School Truth and Healing initiative to address this story.

The founding of the Holy Rosary Mission was part of a much larger settlement project ultimately devised by the United States government. Over 300 boarding schools have been funded by the government and often run by various Christian denominations. Like the Holy Rosary Mission Residential School (renamed Red Cloud Indian School in 1969), these schools were places where aspects of Indigenous culture were intrusive and forbidden. The government’s vision for residential schools was explained by one of their architects, General Richard Henry Pratt of the Carlisle Indian Industrial School in Pennsylvania, as a method of assimilation: “Kill the Indian, save the man.” .

To ensure the effectiveness of this assimilation, boarding schools rely on the removal of children from their families. As the church today preaches the sanctity of family life and the need to pass on values â€‹â€‹and faith in the family, in the 19th and 20th centuries in North America, the church participated in the process that has systematically broken indigenous families.

A survivor of the Holy Rosary Mission described family separation as “damaging” to the bond between parents and their children. â€œThis is probably the most important thing they took away from usâ€¦. You lose that part of your cultureâ€¦. I think you spend the rest of your life not knowing who you are.

Long hair was cut, given names changed, and traditional clothing was banned in most of these schools, including Holy Rosary Mission. â€œI found that very ironic,â€ said one mission survivor of his haircut. “[They] told me one thing, then they showed us Christ on the cross who had long hair.

â€œWe regret our participation in the separation of families and the removal of indigenous sacred languages, cultures and ways of life,â€ the Jesuit Conference of Canada and the United States said in a statement last month. “While these practices and our participation in such schools ended decades ago, their traumatic effects have continued to reverberate through generations and are still very much present in many today.”

â€œThe basic structures and practices of these schools required indigenous children to be separated from their families and prohibited these children from speaking their language and practicing their culture. “

â€œWe regret our participation in the separation of families and the removal of indigenous sacred languages, cultures and ways of life,â€ said the Jesuit Conference of Canada and the United States.

Many Indigenous peoples recognize the history of Indigenous cultures two days each fall. In addition to Indigenous Peoples Day, which is celebrated this year on October 11 in the United States, several in Canada and the United States begin to commemorate the historical trauma suffered by Indigenous peoples as a result of colonization each September 30. , on the occasion of what is now known as Orange Shirt Day. Orange Shirt Day is named after Phyllis Webstad, a survivor of St. Joseph’s Residential School in Williams Lake, B.C., who remembers wearing an orange shirt her grandmother bought her on her first day school.

â€œWhen I arrived at the Mission, they undressed me and took off my clothes, including the orange shirt! Recalled Ms. Webstad of the Stswecem’c Xgat’tem First Nation. “I never wore it again,” she added. “The color orange always reminded me of that and how much my feelings didn’t matter, how nobody cared and how I felt like I was worthless.”

In addition to Indigenous Peoples Day on October 11, many Canadians and the United States begin to commemorate Orange Shirt Day every September 30.

The tensions we experience today in Red Cloud stem directly from its foundations as part of a similar colonial project. The Jesuits came to Pine Ridge at the invitation of Chief Red Cloud, but the deleterious impacts of their assimilation efforts, carried out in conjunction with the United States government, are undeniably still being felt – one of the reasons Orange Shirt Day resonates with Indigenous peoples. from Red Cloud today.

As part of Orange Shirt Day commemorations this year, Red Cloud students created a memorial using early 19th century school desks that they collected from our store. They painted the desks orange and invited the community to write on them, as well as donate memorials of flowers, fruits and traditional medicines as a way to honor the more than 6,000 children who died in Native American residential schools across the city. ‘North America.

From the same desks, students were once forbidden to speak Lakota, our students wrote, in Lakota, words of remembrance and honor.

From the same desks, students were once forbidden to speak Lakota, our students wrote, in Lakota, words of remembrance and honor.

Once an institution that systematically suppressed the Lakota language, Red Cloud Indian School is today a Lakota language immersion school. Lakota culture and sacred rites are also practiced and taught in our classrooms, and Indigenous artists and culture are supported by our Heritage Center.

Yet the changes that have taken place at Red Cloud over the years may seem hollow, as our tragic past has not been sufficiently recognized. That’s why we embarked on a process of truth and healing inspired by the research of Dr. Maria Yellow Horse Braveheart, a psychologist who has studied the effects of generational trauma and healing pathways. Dr Braveheart presents a four-pronged path to dealing with this trauma: confrontation, understanding, healing and transformation. We hope this process will help us recognize this damage and lead our community to collective healing.

At Red Cloud, we are now in the confrontation phase. This includes collecting survivor stories and facilitating frequent talking circles within our community to provide a space to unbox this story and its impact on our present. Some survivors carry stories of pain with them; others have fond memories and gratitude for their time at the Holy Rosary. Their stories will help create a complete picture of our history.

The confrontation also signified the initiation of a community-wide process that will culminate in the use of ground penetrating radar (GPR) on our campus. It is already clear to us that in our historic cemetery, there are graves that have lost their bearings. This technology will help us determine the exact location of these graves and allow us to mark and commemorate them in a way that honors those buried there.

The confrontation also prompted questions from students and educators about our classrooms and our curriculum. What does it mean to teach American literature, for example, in an English department of a former boarding school where English was once a means of assimilating children into white culture?

An exploration of our Lakota-Catholic identity is also fundamental to the experience of confrontation. We are fully aware that some members of the Lakota community wish that Red Cloud was no longer a Catholic school. Yet there are Lakota who wish Red Cloud to claim an even more vibrant Catholic identity. We believe that an essential component of confronting this past is to confront these questions directly and at their deepest levels. No amount of balancing Lakota and Catholic spiritual practices by equal weight or mandate can solve the fundamental problem of discomfort or anger towards Catholicism.

The Red Cloud Indian School is the starting point for the much needed intercultural and interfaith dialogue that seeks to address the tragic history of the Native American boarding system.

Red Cloud Indian School is the ground zero, in many ways, for the much needed intercultural and interfaith dialogue that seeks to address the tragic history of the Native American boarding system. For Aboriginals, it is a family affair. We have grandparents who were in these boarding schools and can draw a straight line through the trauma experienced through the generations. For Jesuits and other white Catholics, our spiritual lineage and privileges are directly linked to this history of colonization.

We are all hurt by this story. All people are affected by intergenerational trauma and feel both oppressive and downtrodden.

Delving into this story probes both the mysteries of evil and of grace. We don’t yet know what a decolonized church looks like. We hope, however, that by engaging with the past and its legacy, we can move forward towards collective healing and discover new avenues of relationship between Indigenous peoples and the Catholic Church.