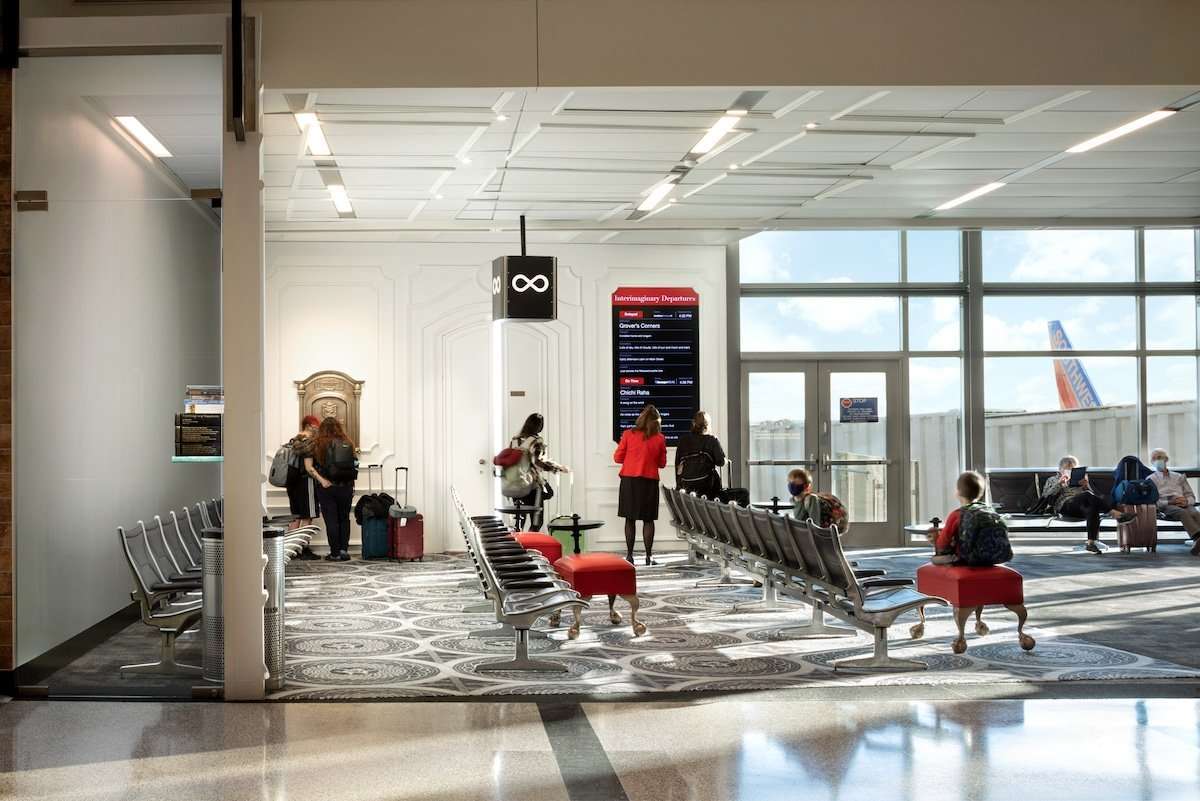 There is no Gate 13 at Austin-Bergstrom International Airport. Instead, between Gates 12 and 14 is Gate ∞ (the infinity symbol), an immersive and interactive permanent installation by Brooklyn-based artist Janet Zweig.

Called “Interimaginary Departures,” the installation opened late last year ahead of this summer’s wave of travel. The space is shaped like an airport gate area, but the rows of seats are set at a seven-degree angle and intersect a wall.

The imaginary fights that start from Gate ∞ go to 120 fictional locations. Spellbound Airlines flies to Narnia, for example, while JaneAir flies direct to Pemberley, UntitledAirlines will take you to Peyton Place and ArsLonga flies to the Emerald City. An audio component provides original announcements about imaginary locations.

On a touchscreen kiosk, visitors can answer a few interrogative questions – “If you do all there is to it, what can you do next?” — before printing a souvenir boarding pass. A large double door is partially open, a bright white light shines beyond.

“Intermaginary Destinations” was commissioned by the City of Austin’s Art in Public Places program and its $950,000 cost was funded by the Austin-Bergstrom International Terminal Expansion Capital Improvement Budget.

We asked Zweig a few questions.

Lines of Sight: Much of your artistic practice has been in the public domain. What intrigues you about public art and engages your imagination?

Janet Zweig: The art of galleries and museums attracts a very specific audience. When I do a public work, like the one I did for the Austin airport, people from all walks of life experience it. I try very hard to do work that assumes that the audience for public art is as intelligent and sophisticated as the audience for gallery art. it’s just a wider audience and I prefer that. I feel that I put art in a larger world.

S: You said that “Interimaginary Departures” is inspired by “The City & the City”, a novel about a murder investigation in two cities that simultaneously occupy the same space. Beyond the notion of simultaneity, what else has fed your creative process?

JZ: ‘Interimaginary Departures’ is inspired by so many things. The physical space of the room was designed with my studio assistant Kyle Hittmeier in the Rhino program. We designed the space together, tilted it at a seven degree angle, then dropped it into the existing airport space. Like “The City & the City”, the two spaces intersect. If you look closely, you’ll see some weird places where they intersect, like the ceiling grid and the ceiling coffers, not to mention the more obvious places where the airport benches intersect the walls and our red benches. The space to the left of the facility is formed as an actual airport space left by the intersection of the two spaces.

Another visual influence was the movie “2001: A Space Odyssey” – we imitated the walls in the last scene of this movie. And the rabbit designs come from a variety of sources: the rug is home to the iconic “three hares sharing three ears” that appears all over the world in the art of 6e from century old Chinese caves to medieval European churches. The “duck-rabbit” illusion on the cash dispenser is another image that has always fascinated me. I have used this airport piece as an opportunity to insert many of the visual marvels I have collected over the years, providing “easter eggs” for observant viewers who spend time with the piece.

In terms of content, the play owes a debt to fiction, science fiction and fantasy. I so enjoyed reading many books containing the fictional locations described in the article. Several books by Mark J. Wolf on imaginary worlds and Manguel and Gudalupi The dictionary of imaginary places were big influences.

S: “Interimaginary Departures” is very complex, layered, dense and requires considerable interaction. How did you balance that with being in a busy airport, a place where people’s attention is often drawn in so many directions?

JZ: Places of transit are spaces where people wait a long time without doing anything or rush to get somewhere. During these long waiting periods, travelers crave something to occupy the imagination. The responses we received convince us that people really enjoy the layered aspects of the play and are kept busy and entertained by the changing tableaux and announcements.

S: What kind of responses did you get from the people who got involved in “Départs interimaginaires”?

JZ: I’m glad to see the article is all over Instagram and TikTok, but I’m also getting personal emails from people who liked it. For instance:

‘Hi there! I wanted to write to you and thank you for this beautiful installation. I’m on hour 3 of my unexpected 5 hour layover in Austin, and the departure announcements are the only thing keeping me sane. Once the boarding call for Night Vale hits, I might have to go through those double doors. With gratitude from Present Me, but (more importantly) 10-year-old me.

S: In its early days, air travel seemed glamorous. Since the pandemic, it is now so fraught with frustration, tension and anxiety. Do you like airports, travelling, flying?