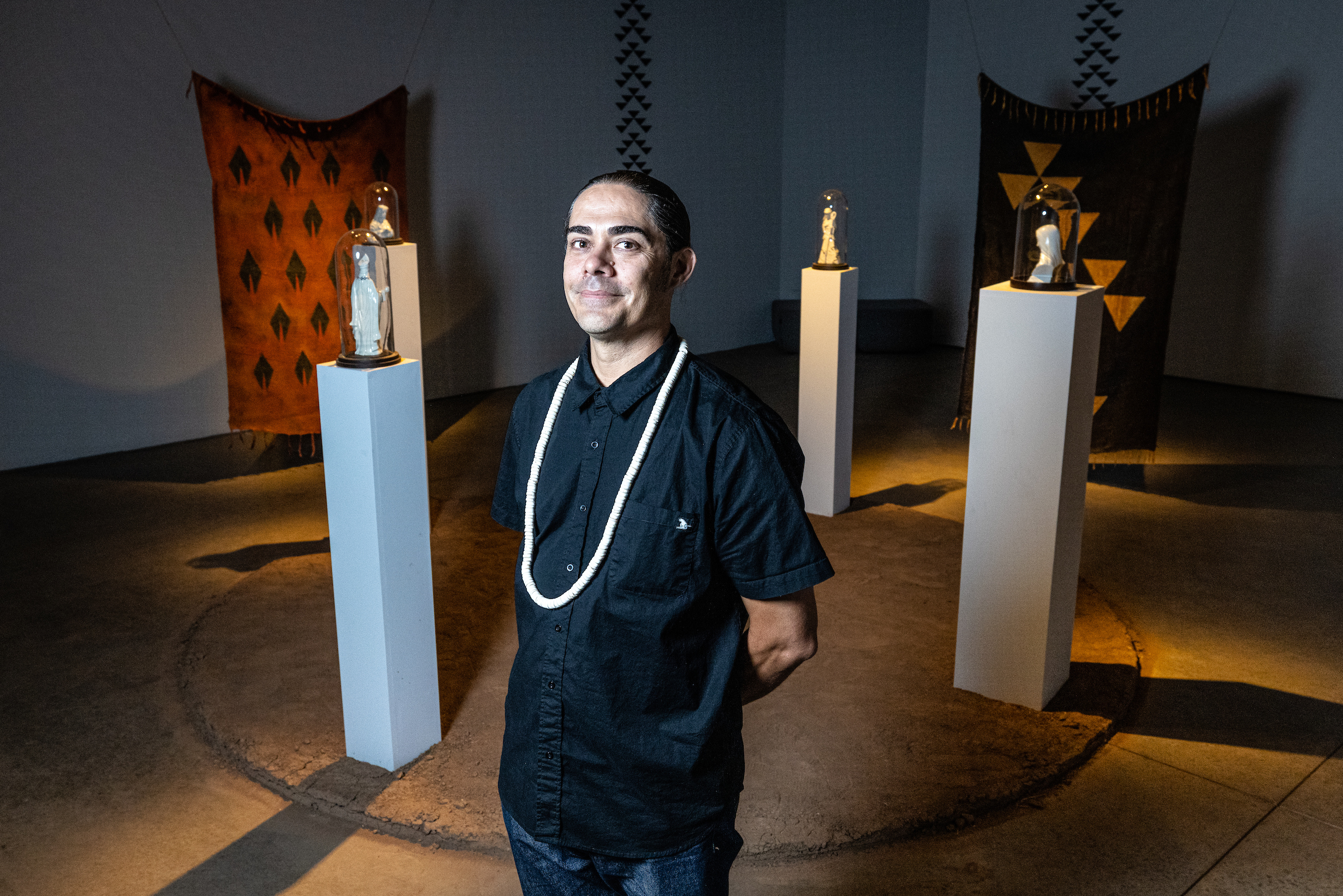 ASU professor explores questions of the sacred and the discarded

Meders responded to ASU News’ questions about its exhibit and teaching on the West Campus:

Question: What questions do you want viewers to ask themselves with this piece?

Reply: There are many questions asked in this work. Work tends to be more powerful with questions and not just answers.

These objects are thrown away and unwanted, and they are also objects that were part of capitalism and that have been turned into commodities and sold and thrown away.

When you start to think about what is sacred to non-Indigenous people through their system of practice and how they approach it, then think about the Indigenous perspective on it, you have two ways of dealing that are very different.

I ask viewers to think about this.

I recovered these discarded items and indigenized them. I painted them and created a new space for them to exist, and in a way they become sacred again, but from an indigenous perspective.

If you think about the way we approach the sacred things of aboriginal people, it’s, “We’re going to put a pipeline there, we’ll put a highway there, we’ll dig a big hole and we will create a mine. We will destroy the water.

You think it must be easy for people who would haggle over their religion and reject it. If that’s what they do with their own practice and belief system, then that’s why we’re getting these results.

Q: Is this a question that you explore in much of your work?

A: Yes. There is this dialogue with Christianity and colonization and the idea of ​​Manifest Destiny and even the title “And it’s built on the sacred”, referring to the churches and temples that were built on sacred places of the peoples. indigenous.

If you think of the American Indian Religious Freedom Act, it was in 1978 that natives were allowed to practice their own ceremonies and beliefs which were prohibited for a very long time. It was the year after I was born, so I’m not talking about something untouchable in the past.

I think of how many Native people hid their ceremonies in Christianity. I am also thinking of boarding schools. Many of them were run by the church, and to this day the Pope will not apologize or acknowledge the abuses that occurred. Children have been raped, killed and beaten because they spoke their language or simply because they existed and were Indian.

Q: Why did you organize the exhibition this way?

A: There are a lot of layers and directions here.

The podiums are north, east, south, west. The female faces east, which greets the sunrise because it all starts with the female.

There are little niceties to explore, and I hope you start to grow, learn, and think about these things.

You don’t reveal everything. You need to let the viewer ask questions and find ways to go through this work on their own and not hold their hand or say, “This is what it means to be native.”

Q: What about the dirt on the floor?

Even the apprehension of whether you should walk on that dirt or not makes you choose. You see where people have stepped on it, but should you? In a way, I almost draw them in there because the best perspective to see the work is the center. You see the objects and how they fit together.

It makes you think for a moment whether this is appropriate or not, and it’s an important step in bringing the viewer through and a process that needs to happen more often in our daily lives.

The land is from my backyard, and people laugh about it, but it asks you too – the land you thrive on, the land you raise your family on, the land you claim is yours, that’s O odham land. And these people have been here for thousands of years and taken care of them, and are you taking care of them? Does this seem sacred to you? It starts with your own garden.

Much of my work now focuses on this point; as I got older, I made sure that there was something in the work that allows the viewer to have space to heal. And for me too as an artist, because I have to go through this historical trauma during research and construction.

Q: Why did you paint the covers?

The blanket came to me because we have blanket ceremonies, and the blankets are important gifts in Indian country. But blankets can connect beyond our Indigenous culture.

I started doing these contemporary images of my culture, mostly around weaving baskets or things made around ceremonies, with conceptual renderings that point to but not specifically these things, like model baskets.

It’s also about the process, in which I slowly build up those layers that over time start to mask the old pattern, which starts to wear off. It’s not just what you see, but how it fits into the concept.

Q: And are there any weaving references in the dirt floor?

A: Weavers are healers because they understand so much the plants and the land. Collecting this weaving material is a one-year process to maintain and care for these plants.

By putting willow under the earth, he speaks of knowledge and guardians of the earth.

Over time, the willow begins to show itself through the earth. It’s a work in progress as people interact with it.

Q: The entrance to the gallery has a field scout that you printed with hand type in your printing house, WarBird Press, and it’s also in a newspaper dispenser in the lobby. You have often distributed your printed works in newspaper vending machines. Why are you doing this?

A: It is an ongoing process of social engagement that I have had for years now. I put them in different places at different times. There was one at the ASU Art Museum recently, and there were three in Chico, which is the town built on our village Mechoopda.

As an artist, some of my audiences are people who may not come to a museum and they are not people who enter an institution like a university. They don’t feel welcome sometimes.

Print multiples are the ideal medium for disseminating information, and it has been so throughout history.

I think about how I can use this colonial material, as the indigenous people have done throughout history, be it the horse or the rifle, to master it and use it in a different way. .

It’s having a conversation with the audience and doing something with it that they can take home and own a piece of handmade art.

Q: Last fall you taught the Print and Protest course for the first time with professors from the English department. What was this class talking about?

A: I made sure that the students had a clear and defined understanding of protest and propaganda and made them understand that when they approach these protest topics, they really have to do the research and do the homework to understand what is going on. what they are talking about because we are in an age of disinformation.

You are in college, you are a scholar, and you need to know the facts.

They then chose their own area of ​​protest and saw historical examples of protest in print, such as the work of Ester Hernandez and farm workers.

They learn how the print affected the history of the protest.

Then they can use that old vintage newspaper equipment, hand-set the lead and wood block, cut their own paper, and make their own prints. We call it Press West.

It’s about the type and words they use and how they spell them. This is why the English department is so important. We’re talking about puns and how you get the meaning you want with very few words.

We made a collaborative impression at the end which was on display at the “ABBA’s Greatest Hits” exhibition at the Harry Wood Gallery. And they won an honorable mention, which was really cool.

Many students said the class was really what they needed. With all the stress in the world and in politics, it gave them a voice.

Top image: Jacob Meders, Assistant Professor at the New College of Interdisciplinary Arts and Sciences, with his installation “And It’s Built on the Sacred”, which will be on view until October 17 at the Scottsdale Museum of Contemporary Art, 7374 E. Second St ., Scottsdale. Photo by Charlie Leight / ASU News

The Print and Protest course is expected to be offered in spring 2022.