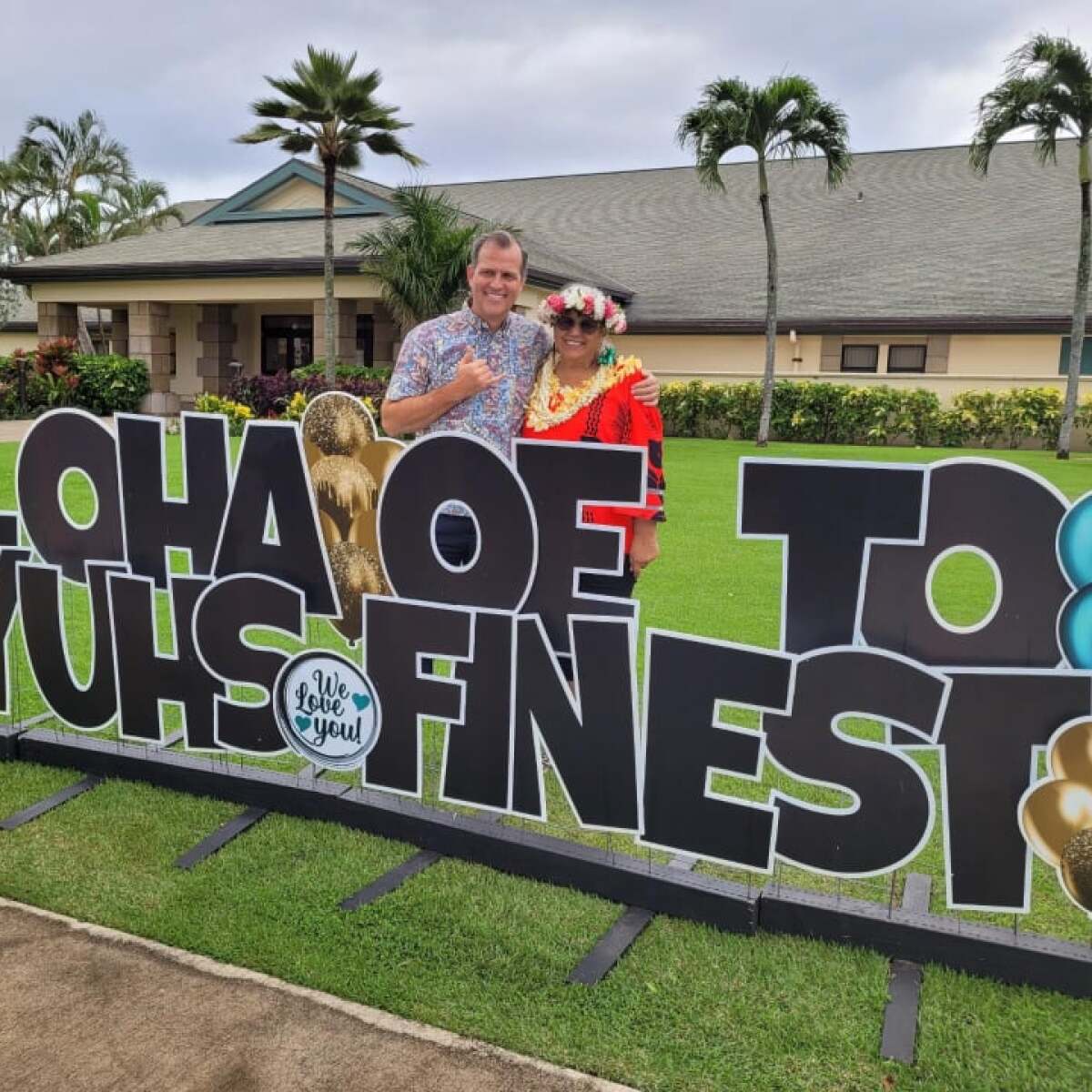 A red poinsettia and a small garland of Christmas lights adorned the kitchen of our small shared accommodation in Hauula. It was a simple act, one of many I’ve witnessed in the past two days I’ve spent interviewing Anna Kaanga for the story announcing her retirement from BYU-Hawaii.

When she learned that we were a small family – two couples making the most of a vacation period away from our mainland families – compared to her family of 12 children and “41 and a half” grandchildren, Kaanga n Didn’t insist or offer, rather she acted. Before I fully realized what was going on, I was waiting in her car as she collected decorations from her own home on Kawaihemo Place, which was populated by smiling, laughing grandchildren on her lawn.

Aside from this simple act of goodwill, Kaanga’s interview was interrupted a handful of times by children, hers and her children’s, calling her for advice or bumping into her at the mall – where we we sit eating the breakfast she bought me – and ask to borrow a mask. People from the community also stopped by, needing his help or to say hello, and I never had the opportunity to ask about their connection to Kaanga, but I could guess by their smiles and their waves that they too had been the recipients of his simple acts.

“Aunty treated me to a pedicure at a salon once,” shared Cecil Caro, a recent BYUH graduate from the Philippines who worked for Kaanga as one of her teaching assistants. “It was the first time someone gave me a pedicure, so it’s definitely a memorable experience.” Caro added that Kaanga also didn’t hesitate to take him on the 30-plus-minute ride to the local Department of Motor Vehicles (DMV) at 7 a.m. once so Caro could take his exam. written conduct.

As an administrative assistant at the Faculty of Religious Education, Kaanga explained that she was able to work with full-time faculty as well as the many senior missionaries called to teach religion at BYUH who constantly come and go. One such missionary couple, Aaron Hatch and his wife, Patty, came to serve in Hawaii with their daughter, Julie. Elder Hatch taught seminary preparation classes at BYUH from fall 2002 through spring 2003.

In a letter to Kaanga on July 14, 2003, Elder Hatch shares several experiences in which Kaanga helped him settle in as a new teacher at BYUH. He writes: “Now it’s a very small thing, but when I needed to buy videotapes for my lessons, you said, ‘Go to Sam’s Club and buy them in bulk.’ I replied with ‘Where’s Sam’s Club?’ Very patiently, you drew me a map, we followed it and got the tapes.

He adds that Kaanga also gave him and his wife a list of all the sights to see on Oahu. “We remember when we got lost in Kaneohe, and I said, ‘There were three Kaneohes,’ and I knew that because I had walked through three. You laughed and said, ‘No, there’s only one, and you were going around in circles.’ »

Another pair of missionaries Kaanga served with were Bob and Marilyn Parsons. In a card they left for Kaanga before returning home in 2006, Marilyn Parson writes that Kaanga was the “first hug we received when we arrived and the last when we left”. She adds that whenever they had a problem with the computer, her husband would immediately announce that he was going to Kaanga with his question.

Aaron Shumway, Associate Professor and Director of Religious Education at BYUH, shared, “She [Kaanga] build people. Above all, she cares about the individual. He explained that his concern for people didn’t stop him from following correct processes and policies, and he described her as “eminently capable, but also eminently personable.”

He continued: “If someone says, ‘I have a problem with that,’ before the words are even out of her mouth, she’s on the phone talking to someone, and in less than two minutes, the correct connections are established, or someone is about to fix it.

Kaanga herself noted the relationships she formed during the nearly 40 years she spent at BYUH, including the five years she worked as an administrative assistant for three different faculties at once.

“It looks like you got to know a lot of people,” I remarked to Kaanga during our interview. Immediately, she began listing all the departments she has worked with and is grateful for, including facilities management, the library, construction workers and caretakers. “Media Services,” she pointed out, “Make sure you have media in there.”

“If someone says, ‘I have a problem with this’, before the words are even out of her mouth, she’s on the phone talking to someone, and within two minutes the right connections are established, or someone is on the phone. way to fix it. »

Kaanga said she always tries to remind the teachers she works with to be nice to the guards and construction workers because, she explained, they never know when the bathroom might overflow. or that computers might break down. “I got to know just about every department on campus and every [phone] number and lot of mobile phone [numbers], too,” she laughs. “And they were so good. In an emergency, they are always there.

Working as an administrative assistant, particularly in the Department of Religion, Kaanga said she was surrounded by “spiritual giants” who enriched her knowledge of the gospel. “One of the religion teachers I worked with was my own general authority. He was such a good, good man. …. It just opened my eyes to so many things.

This religion teacher, LeVar Thornock, reminded her for a while that Kaanga said she felt guilty for being a working mother: “’It’s just between you, your husband and the Lord. Nobody else. Kaanga added, “He was so kind and so loving. He made me feel good, and it helped me become a better person.

These conversations often happened when religion teachers mingled near Kaanga’s desk at the Office of Religion, she said. “The insights I gathered while working in the Department of Religions on religion [and] on the scriptures is amazing. There is no price tag on it.

As a child, Kaanga said she loved going to church, and when she went to boarding school, Kaanga shared, she couldn’t go to church, so she started her own little study sessions in group in his dorm. Two of those classmates later joined the church, Kaanga added. “Personally, I have always loved the gospel. [I] enjoyed serving there.

She explained how not all of her family members and children shared her same love for the church and the gospel, but working in the religion department among these “spiritual giants” made her feel “real”. She continued, “Working in the religion office made me feel like there was hope for me.” Whenever she started to wonder if what she was doing was right or enough, Kaanga said one of her colleagues would tell her about a different quote or scripture that would boost her confidence and add to her faith. .

At the end of December 2021, Kaanga officially retired from her position as administrative assistant. Her kids threw her a surprise drive-thru retirement party, at which former colleagues, friends and loved ones came to show their appreciation and love. Faced with this new chapter in his life, Kaanga shared, “It’s going to be exciting. And it will be fun. It will be crazy. And am I ready for it? I’m not sure, but I’m sure. Nobody is ready for anything, but they are rushing. Not true ? »

The fall of Prince Andrew: what you need to know

Hoteliers are redefining the growing segment of religious tourism in India