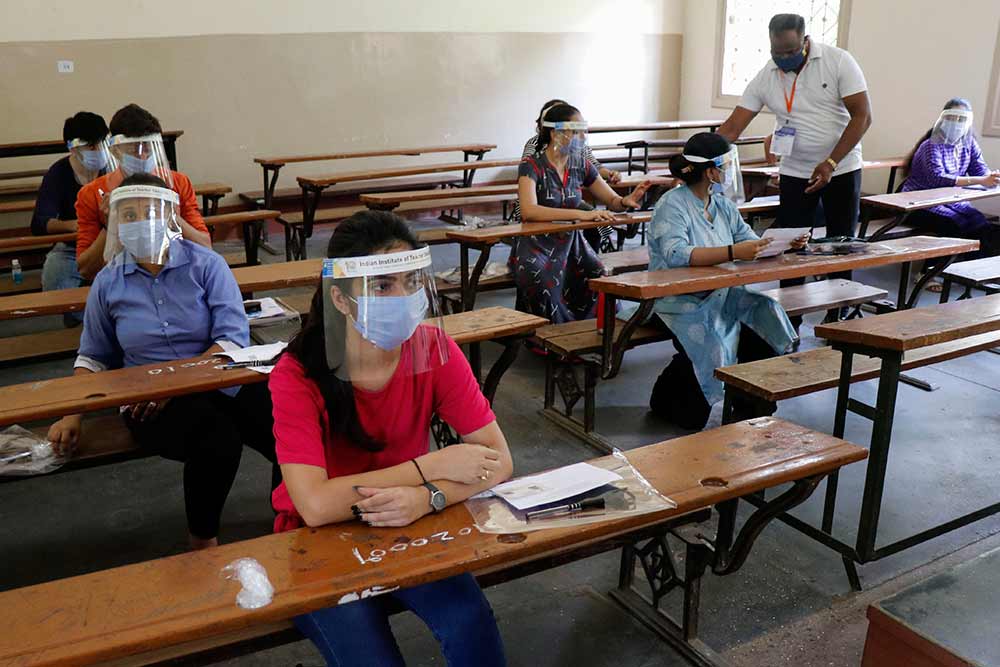 A test to make all other tests redundant

“CUCET Exam Online Courses and Mock Tests”: Just as I opened my laptop, this ad popped up on my screen. It offers daily live lessons by expert teachers, comprehensive mock tests, instant double-resolution report card, performance analysis with the promise of full curriculum coverage. I was shocked. It was like the internet was reading my mind. I thought of Central University Entrance Test (CUET) and here is the offer.

Then I discovered that there are other companies competing with each other, offering discounts and promising success. It was of course for the combined test that some central universities have for admission to their undergraduate courses.

The entrepreneurial spirit of India’s large coaching industry is unmatched. But this is only one of the immediate spin-offs of the centralized test to gain access to undergraduate courses at central universities. There were warnings and his signs were also available. One more centralized test, a new opportunity for coaching workshops. This is what we should call the “Kota-fication” of Indian education.

The anxieties created by another ordeal, apart from the final exam, can have unforeseen consequences. But who cares about young hearts and minds? The Union Government, through the University Grants Commission, decided that they had to undergo another centralized test to qualify for the undergraduate courses provided by the Central Universities of India. The UGC wants all universities and higher education institutions to join this test. This means that even state universities are persuaded to go. Forget the idea of ​​federalism and the fact that education is on the competitive list and not just on the union list. This central test aims to remove the power of states over their universities in another area.

CUET promises a level playing field, uniformity and central command, an obsession with this regime in all aspects of our lives and also something we aspire to as a society. Thus, the esoteric idea of ​​the autonomy of universities in matters of admission to their courses is doomed to lose before this grand design.

The UGC has made it mandatory for all Central Universities to admit students into their undergraduate programs solely on the basis of the Central University Entrance Test (UG-CUET) score to be conducted by the NTA. They are also pushed to admit students into their PG programs based on a PG-CUET score. The NTA notification indicates that a good number of central universities have opted for CUET. This step is claimed to be in line with what the NEP 2020 had proposed. But NEP, while considering such a test, never called for it to be made mandatory. To be fair to the NEP, it pleads for a common principle of admission taking into account the diversity of establishments.

In India, however, we know that policies are used as a fig leaf to hide the true intent. The intention is to take control of the universities. This is done in several ways. By applying a common curriculum and then having a centralized admissions system for all courses from BA/BSc to Ph.D.

As expected, all universities expressed their support with one voice. You will get an idea of ​​how it is achieved by an example. Our university wanted our department to approve the proposal to participate in this test. This is the official procedure you must follow when making an academic decision. As an authorized committee of our department, we found the proposal vague and asked the university to give us more clarity on the design of the test to enable us to make a decision. The next day, with two hours’ notice, the same commission was convened again and the previous decision was annulled! This is how consent is coerced and passed off as voluntary. Vice-Chancellors, Directors, Deans and Chiefs are all too willing to say yes to anything sent from above. It’s the independent spirit of those who promise to help young minds inculcate critical thinking!

There was a general reception to the test. The absurdity of the high marks set by Delhi University colleges is cited along with the inconvenience of students having to race from one university to another for admission. But should it only be the DU experience that should decide the method of trying to decide admissions for undergraduate courses? What is the experience of Central Hyderabad University or Allahabad University? Or the JNU? Or Jadavpur University?
As said earlier, the UGC, ignoring the federal character of the country and the fact that education is on the competing list, also wants all state universities to opt for it.

As Professor Furqan Qamar pointed out, institutions of national importance and central universities represent only 0.78% and 1.93% of students respectively. Professor Qamar pointed out: “The experiences and anxieties of such a tiny segment cannot be extended to a large majority without careful study of the implications. After all, a few states still feel that subjecting them to a national-level entrance test for medical students has been unfair due to merit and inclusiveness.

The Tamil Nadu State’s principled opposition to NEETs is what Professor Qamar is referring to. There is also a fear of centralized advice even though the UGC refrained from mentioning it as necessary. But given the way the UGC is moving towards centralization, the fear remains.

First you have to understand the problem. The challenge comes from the high number of students who aspire to join higher education. The number of places in universities like DU is disproportionately lower than applicants. Why do they rush to the door of such universities? Because almost all state universities collapsed. Devoid of any infrastructure, with most teaching positions vacant, these universities and colleges fail to attract students. The unfortunates who, for various reasons, must be admitted there, regret their fate. Ironically, as central universities complain about overcrowding, we can see seats emptying out at state colleges and universities, which are then used as an excuse not to give them teachers.

These colleges and universities were reasonably good just three decades ago. They had enough teachers dedicated to their vocation. They had a thriving academic culture. Their decline has been slow and before our eyes. It was deliberate. By not appointing teachers, by letting libraries and laboratories die. And little by little the coaching centers replaced them.

The number of students passing class 12 has increased exponentially. The answer should have taken the form of more colleges, faculties and other facilities. This has not been done.

Any admission process is therefore no longer one of admitting those who wish to do so, but of eliminating the majority to make room for a few. As a teacher, I wonder how are we going to determine who is suitable for admission and who is not. Can we do it honestly through a faceless national test?

Moreover, it has been rightly pointed out that first generation students would be at a great disadvantage compared to those more entrenched in the system when taking such a test. Schools have expressed real apprehension that this test will relegate the purpose of schooling to the background. They have NEET and CAT experience making schooling at level 11 and 12 almost irrelevant. Why should this new test turn out any different?

We affirm that we aspire to be world class in education. All the good universities in the world control their curriculum, the selection of teachers and students. In India, we go in the opposite direction.

Finally, if we want to understand whether or not something is good for the people, we need to look at how the elites react to it. The elites designing such policies have cut themselves off from the public education system at all levels. They send their children to universities abroad or to universities like Ashoka University. What is good for the masses is what they avoid. This settles the debate not only on CUET, but also on other regimes such as FYUP and even NEP.