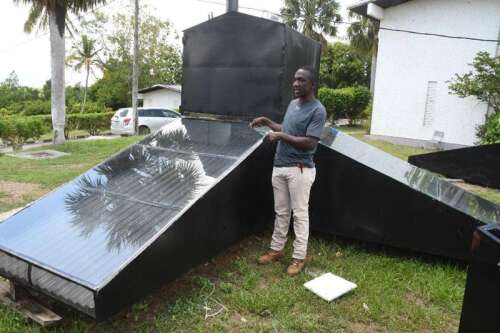 SANTA CRUZ, St Elizabeth – First established for agricultural training on over 200 acres of prime farmland in 1979, the Elim Distance School, aabout five miles northeast of here has always had a lot of advantages.

Observers and headteachers say the ‘game changer’ was a March gift from the J Wray & Nephew Foundation of a $47 million, 2,200 square foot multifunctional food processing plant .

Located on school property opposite the Sydney Pagon STEM Academy campus, the agricultural processing plant will serve not only the needs of the school, but also the wider farming community. This is part of the long-standing goal of advancing Jamaican agriculture beyond primary production to an efficient and comprehensive value-added mode.

When operational, the plant is expected to “dry, grind, package and store using state-of-the-art equipment.”

The state information agency, Jamaica Information Service (JIS) reported at the launch that “farmers will be able to take crops and turn them into chips and other products via baking and frying, as well as transitioning certain crops – such as breadfruit, sweet potato and more – in powders and flour”.

Sydney Pagon principal Milbert George Miller told the Jamaica Observer recently that “anything that can go into powder we can do”.

For Miller, a critical outcome of the J Wray & Nephew Foundation donation will be student involvement in food processing, providing the opportunity to earn Level 3 certification at the NCTVET level and opening the door more widely to education. employment or continuing education.

“It will provide experiential learning and training…” Miller said optimistically.

“As we speak, a program [is being built] — well structured and organized — so that students, once they get here, take a course through to grades 12 and 13. By the time they leave here in 13th grade, [those with an interest in that course of study] should have at least a Level 3 or Associate in Agribusiness. We believe this will help them pursue a proper path in agribusiness on their own, and Jamaica will be better off,” Miller said optimistically.

He expects the plant to begin processing operations “soon” although exact timelines have yet to be established.

“There are a few minor jobs that contractors need to tie up,” Miller explained.

Miller said discussions had started with farmers in St Elizabeth and elsewhere, and a database was being established of those interested in processing their produce.

“We do our best to meet the needs of our farmers. So if you’re a cassava lover, for example, that you want to process for export, we’re here. If you want to label, we can do that too. Whichever modality you prefer, we are ready to support that modality,” he said.

“Our goal is to help our farmers make the transition; and once they can harvest crops and get them processed, get a good price, the economic situation in the community will improve,” Miller added.

Food processing is not new to Sydney Pagon. As part of its STEM education programs and agricultural training, products such as cassava, breadfruit and sweet potato have been dried and processed for years using mechanical dehydration.

With vastly increased capacity provided by the agricultural processing plant, Miller dreams of adding other products, including turmeric and ginger, “anything that can be ground into a powder.”

And while agriculture has always been a priority, large-scale innovation is practiced as an essential ingredient of integrated STEM education.

Vice-Principal Stevie Williams highlighted the school’s use of crushed Styrofoam to make a range of products, including flower pots. “It’s lighter but just as strong [as other materials],” he said.

For Miller, projects that involve recycling materials such as polystyrene foam, which “clog ravines and rivers etc. are essential to environmental education, facilitating “critical thinking” so that “our students can examine real-world problems and come up with solutions” in accordance with integrated STEM education.

When it was established 43 years ago, the school was seen as the cornerstone of the People’s National Party government’s campaign led by Michael Manley to get Jamaicans fed.

There was a dropout from the boarding school in 2014 when seventh graders were admitted. The school was later rebranded and reorganized to provide project-based learning integrated with the STEM curriculum. Educators say the STEM approach to education not only helps students quickly acquire integrated knowledge in science, technology, engineering, math and other fields of study, but also builds self-confidence.

Given the continued and increased importance of agriculture and now agribusiness, Miller dreams of reviving boarding as a core business in the future.

He noted that while the boarding schools have become “somewhat dilapidated” over time, there has been a conscious effort at “maintenance”. He thinks that the rehabilitation will not cost too much.

Miller said the current dynamic atmosphere at his school owes much to the support of J Wray & Nephew. The rum company, a subsidiary of Italy’s Campari Group, has been trying to help people in northern St Elizabeth away from sugar addiction, after its Appleton sugar factory in Siloah closed in 2020.

Speaking at the official handover of the food processing plant in March, Jean-Philippe Beyer, chairman of the J Wray & Nephew Foundation, said his organization was deeply committed to communities in northern St Elizabeth.

Principal Milbert Miller dreams of a return to boarding as a main activity at Sydney Pagon STEM Academy.

The late parliamentarian Sydney Pagon in whose honor the STEM Academy is named.