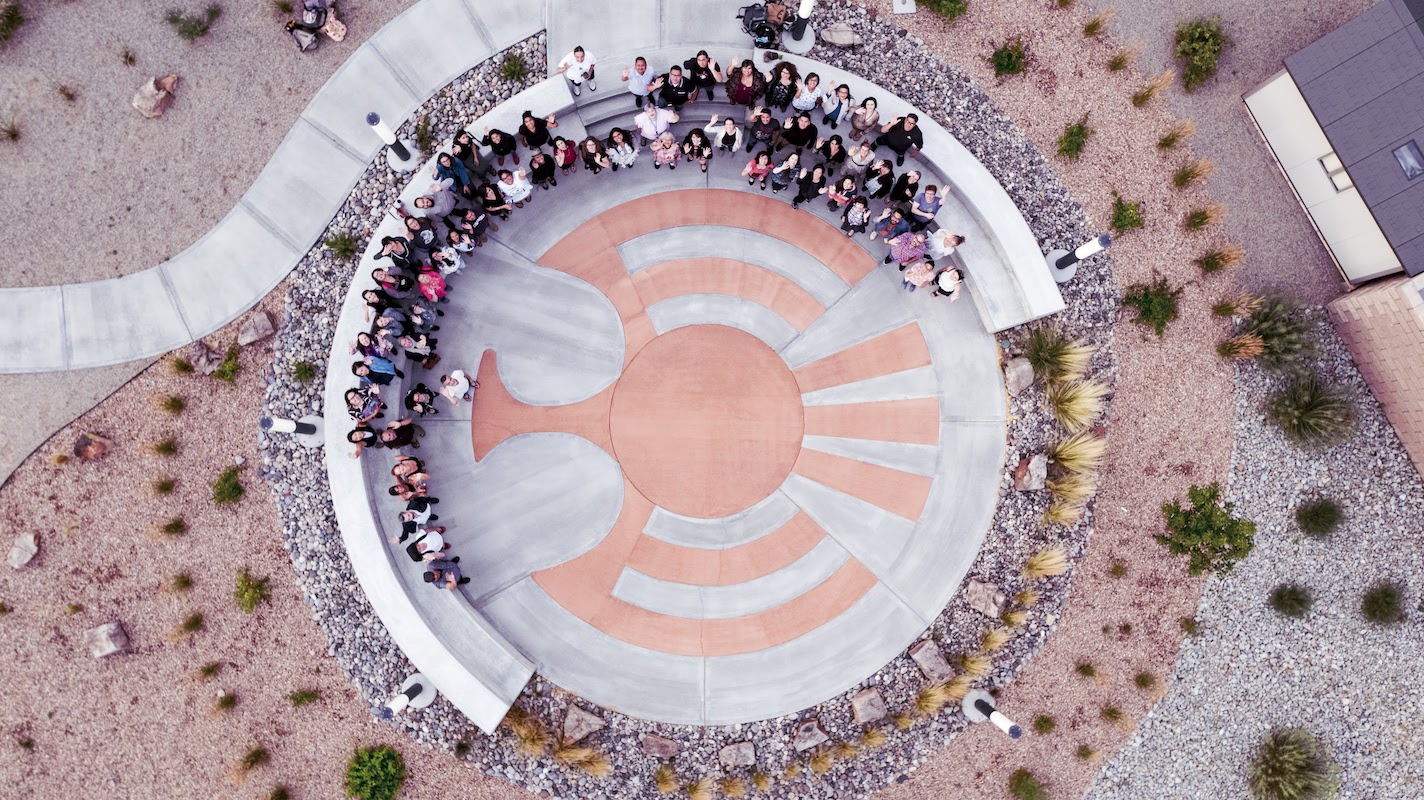 SANTA FE, NM — In 1962, the Institute of American Indian Arts (IAIA) was founded in Santa Fe, marking a pivotal year for contemporary Native arts on Turtle Island. IAIA was and is a revolutionary educational space with a core philosophy of celebrate the difference, which was developed by the organization’s first art director Lloyd Kiva New (Cherokee) and others. This value was about making connections to traditional arts and cultures and celebrating them as avenues for developing personal creative expressions – in other words, being informed by history and heritage but not bound by notions statics of one or the other.

“Wherever you go and there is Indigenous art on display, there will likely be an IAIA connection. We have had a major impact, especially on contemporary Indigenous arts,” says IAIA President Dr. Robert Martin (Cherokee).

The IAIA remains the only educational institution in the world dedicated to the study of contemporary Native American and Alaska Native arts, with a assignment “Building creativity and leadership in Indigenous arts and cultures through higher education, lifelong learning and outreach.

So what were some of the conditions that shaped the design and evolution of the IAIA? While it is impossible to share every known detail of the IAIA’s history in this brief article, it is important to name a few key terms. In the early 20th century, the Bureau of Indian Affairs (BIA) took action to combat violent boarding school programs that assimilated young Native Americans into colonial ways by forcibly separating children from their families, languages, ceremonies and other ways. to be.

These policy changes contributed to the start of Dorothy Dunn’s Studio School in 1932 at the Santa Fe Indian School (SFIS), which would become the IAIA’s first campus. Ryan Flahive, IAIA archivist and author of Celebrating Difference, Fifty Years of Contemporary Indigenous Arts at the IAIA, 1962-2012, explained that by the time the IAIA was founded in the early 1960s, “Santa Fe was firmly established as the center of the Native art market”. The confluence of these factors along with an intentional departure from the dominant “studio style”—and a departure from projected or limited notions of what Indigenous arts are and can be—led to the birth of the IAIA.

The fact that the IAIA and MoCNA are the only institutions managing contemporary Native American and Native American art has made it (and the region as a whole) a gathering place for many indigenous peoples across the continent, which has shaped the experience and sense of a larger community. Artist Cara Romero (Chemehuevi), an IAIA alumnus, illustrates this in her photograph “Making History”. Through the process of making and the image itself, Romero transforms photography into a portal to honor, reclaim and manage the diversity of Indigenous identity and community, a powerful gesture given the history of the how photographs, and even archives and museum institutions, have historically militarized through practices such as theft, erasure, symbolism, and the perpetuation of stereotypes.

Romero describes “Making History” as his biggest endeavor to date, taking about six months to create. Decisions about who and what to include in the photograph come from a committee selection process, striving for a more complete and cross-generational representation of IAIA and MoCNA history. Photography brings together six generations of innovative and esteemed IAIA and MoCNA graduates, leaders, and other community members from different departments, backgrounds, and creative disciplines. “It really became like each person in the photo represented not just themselves, but something bigger than themselves,” Romero says.

The image also includes artwork from the MoCNA collection such as a tapestry by Lloyd Kiva New, a painting by TC Cannon, and pottery by Diego Romero. Each individual in the photo is named here and a documentary trailer, which includes interviews with the participants, is here.

Travel schedules, budgets, and other logistics prevented everyone from being in the same room on the same day, challenges that lent themselves to Romero’s panning style and post-production process. With many people to include, it was important for Romero to have different visual planes in the image and to work in a space large enough to accommodate the composition. The solutions came in the form of pedestals – like those found in the artist’s studios on any given day – installed in the Center Coe new industrial warehouse.

The panoramic image came together over four separate sessions on four different days, for which Romero kept his camera still while moving the set from left to right. With her background in fine art and photography technology, she stitched the images together and created digital illustrations of historical figures, their portraits looking like graffiti on the cinder blocks of the photo’s back wall.

“’Making History’ is a tribute to the power of the institute, the museum and the artists who come out of school and then create our intertribal community. We really follow each other throughout this lifetime, and we hold each other; we all have a deep sense of pride,” says Romero. “It’s such an honor to be able to photograph this historic gathering.”

The institute is also collecting oral histories with six graduates, one from each decade, over the next six months in the IAIA Voices of Alumni Series, launched in April. Flahive says the series—conversations about social and cultural interactions among IAIA students, staff, and faculty—will culminate with “History of the IAIA,” a two-day symposium in October.

IAIA is remodeling a physical space for the IAIA Research Center for Contemporary Indigenous Arts (RCCNA)scheduled to open in the spring of 2023. The project is to house both the MoCNA arts collection and the IAIA archives, serving to “unite art, artists and archives” and help Indigenous scholars and artists to lead the narrative and stewardship of Indigenous arts. and cultural.

The IAIA is also entering into partnerships with CalArts and the Jane Goodall Institute (JGI), collaborations intended to expand mutual learning, employment, representation, and other opportunities for students. According IAIA April Bulletin, the partnership with JGI is an effort to “increase programming for IAIA’s Land-Grant Programs and JGI’s Roots & Shoots Youth Program in Indigenous communities, providing a summer internship for a student from the IAIA and five to eight Mini-Grants for Indigenous Youth.” The CalArts partnership is still in the exploratory stage, but hopes to build on the pre-existing community ties between the two schools.

I had the chance to ask Martin how the collaboration with the Jane Goodall Institute and expansion of land grant programs (with the development of courses/workshops on land subsidies and agricultural education outreach) are part of IAIA’s future visions. He mentioned that land is the basis of identity for indigenous peoples around the world and that with climate change, the challenges and needs of growing nutritious food, it is imperative that the world as a whole practice being good stewards of the land through traditional agriculture. Regarding adaptation to climate challenges, Martin said, “Indigenous peoples have a lot to offer, and we want to develop that.

The future of the IAIA also includes global Indigenous critical scholarship. Martin said: “What the pandemic has done is hasten history for us.” The pandemic has made the inequalities faced by racialized communities, including Indigenous communities, undeniable, heightening national awareness and contribution. The IAIA has quickly adapted to new distance learning technologies, and Martin believes this will influence the institute far beyond the pandemic, providing more options for virtual, in-person and hybrid education and making it more possible to remain involved in one’s home community while attending school. They also make knowledge sharing more accessible nationally and globally, expanding the IAIA’s legacy of alchemical challenges into nurturing spaces for Indigenous peoples to flourish in their well-being and expression.